"FRAND" is a FRAUD. One option under consideration is to demand the patent holder give everyone a royalty-free patent license for implementing the standard. 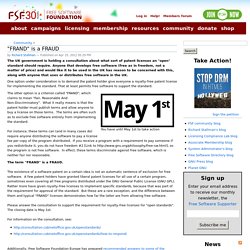 That at least permits free software to support the standard. You have until May 1st to take action The other option is a criterion called "FRAND", which claims to mean "Fair, Reasonable And Non-Discriminatory". What it really means is that the patent holder must publish terms and allow anyone to buy a license on those terms. Format Wars: Blu-ray vs. HD DVD. Why Sony Won the Format War. I finally figured out why I was so dead wrong about the HD DVD versus Blu-ray format war. 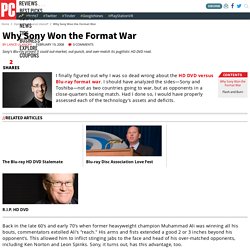 I should have analyzed the sides—Sony and Toshiba—not as two countries going to war, but as opponents in a close-quarters boxing match. Had I done so, I would have properly assessed each of the technology's assets and deficits. Back in the late 60's and early 70's when former heavyweight champion Muhammad Ali was winning all his bouts, commentators extolled Ali's "reach. " His arms and fists extended a good 2 or 3 inches beyond his opponent's. Taking the headphone jack off phones is user-hostile and stupid - The Verge. Why Apple Was Right To Remove The iPhone 7 Headphone Jack. iPhone 7 and EarPods / Lightning headphones (Image: Apple) Apple’s new iPhone doesn’t have a headphone jack, only a Lightning port that’s also used to charge the battery. 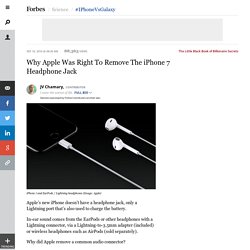 In-ear sound comes from the EarPods or other headphones with a Lightning connector, via a Lightning-to-3.5mm adapter (included) or wireless headphones such as AirPods (sold separately). Why did Apple remove a common audio connector? The 3.5mm jack is over 50-years-old and doesn’t do much besides carry an audio signal. It needs its own power amplifier and digital audio converter, which can be built into headphones, so removing the jack makes room for other things, such as a second speaker. As Apple marketing chief Phil Schiller said at the iPhone 7 launch, “Maintaining an ancient, single-purpose, analogue, big connector doesn’t make sense because that space is at a premium.” Schiller said the decision to drop the 3.5mm jack was down to courage. Sound quality High-resolution audio. 152. "FRAND" is a FRAUD. Formulas for fair, reasonable and non-discriminatory royalty determination. Salant, David J (2007): Formulas for fair, reasonable and non-discriminatory royalty determination. 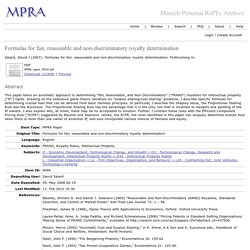 Forthcoming in: This paper takes an axiomatic approach to determining “Fair, Reasonable, and Non-Discriminatory” (“FRAND”) royalties for intellectual property (“IP”) rights. Drawing on the extensive game theory literature on “surplus sharing/cost sharing” problems, I describe specific formulas for determining license fees that can be derived from basic fairness principles. In particular, I describe the Shapley Value, the Proportional Sharing Rule and the Nucleolus. The Proportional Sharing Rule has the advantage that it is the only rule that is invariant to mergers and splitting of the IP owners. Group Thinks Anonymity Should Be Baked Into the Internet Itself. The Internet’s main engineers have asked the architects of Tor—networking software designed to make Web browsing private—to consider turning the technology into an Internet standard. 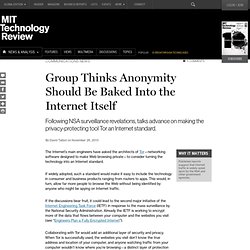 If widely adopted, such a standard would make it easy to include the technology in consumer and business products ranging from routers to apps. This would, in turn, allow far more people to browse the Web without being identified by anyone who might be spying on Internet traffic. If the discussions bear fruit, it could lead to the second major initiative of the Internet Engineering Task Force (IETF) in response to the mass surveillance by the National Security Administration. Already the IETF is working to encrypt more of the data that flows between your computer and the websites you visit (see “Engineers Plan a Fully Encrypted Internet”). Collaborating with Tor would add an additional layer of security and privacy. Andrew Lewman, executive director of Tor, says the group is considering it. Internet Engineering Task Force (IETF)