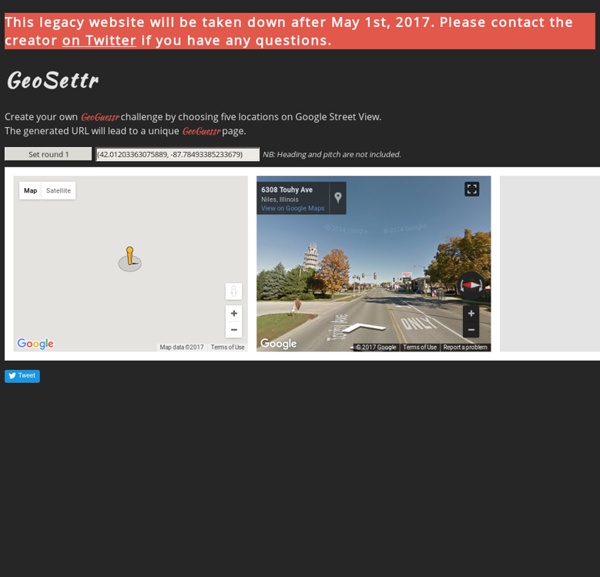 10 applications pour Google Cardboard The Google Cardboard virtual reality headset and app platform has been out for a while now. It was introduced at the Google I/O developer conference in June 2014, but it’s not the most well understood technology out there. Perhaps the best way to understand it is to try it out. Fortunately, Google has been showcasing Cardboard-compatible apps in a special collection in the Google Play Store. writer - Education Education inkle is looking to bring interactive stories to the classroom, and give teachers free and simple get-stuck-right-in software to use with their students. From within a web-browser, the inklewriter will let students make and play interactive stories with no programming required.

WalkInto lapse: Landsat Satellite Images of Climate Change, via Google Earth Engine TIME and Space | By Jeffrey Kluger Editors note:On Nov. 29, 2016, Google released a major update expanding the data from 2012 to 2016. Read about the update here. Spacecraft and telescopes are not built by people interested in what’s going on at home. Rockets fly in one direction: up. Telescopes point in one direction: out. Home - TripGeo.com - Map Your Trip Presentation Software that Inspires General Use Restrictions. Giant Thinkwell provides content and other services through the Service. Certain information, documents, products and services provided on and through the Service, including content, trademarks, logos, graphics and images that are not Presentations (as defined below) (together, the "Materials") are provided to you by Giant Thinkwell and are the copyrighted work of Giant Thinkwell or Giant Thinkwell's contributors. The Service also provides, among other things, an online marketplace (the "Marketplace") where you can browse and acquire content and services for use in your Presentations ("Marketplace Items"), which may be subject to third party rights, license agreements, or obligations.

Classical music library Classical music library We provide high quality, interactive sheet music - synced to real recordings. Have an iPad? Moonbase Alpha on Steam About This Game NASA has once again landed on the lunar surface with the goal of colonization, research, and further exploration. Shortly after the return to the Moon, NASA has established a small outpost on the south pole of the moon called Moonbase Alpha. Utilizing solar energy and regolith processing, the moonbase has become self-sufficient and plans for further expansion are underway.

Build-A-Body Overview Learn about the body's systems with this drag and drop game. Choose organs from the organ tray, and place them in their correct position within the body to create organ systems. Build-A-Body is a drag and drop game where players are tasked with assembling an organ system from a set of organs. Players may then attempt case studies where a functional problem with a system must be linked to the organ affected. How to play Build-a-Body