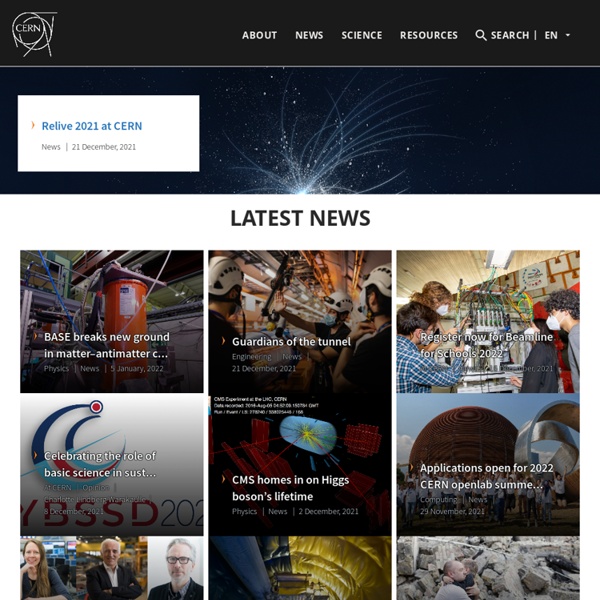 Better Nuclear Power Through Ping Pong The lab is deep-space quiet. A long, narrow hallway hung with fluorescent lights extends to my left. Four or five doors interrupt the flow of drywall. A few of those doors are open, the occupants of the rooms within now out in the hall and staring, ears plugged in anticipation. A technician flips a small lever to activate the vacuum pumps on an 18-foot cannon that is tented in bulletproof polycarbonate. He's dressed casually in dark jeans and a black button-down, an ID card coolly clipped to his pants. Facial Expressions Micro expressions are very brief facial expressions, lasting only a fraction of a second. They occur when a person either deliberately or unconsciously conceals a feeling. Seven emotions have universal signals: anger, fear, sadness, disgust, contempt, surprise and happiness. You can learn to spot them. History

The Real Story of 'Hidden Figures' and NASA's Women Computers Katherine Johnson, the movie's protagonist, was something of a child prodigy. Hailing from the small West Virginian town of White Sulphur Springs, she graduated from high school at 14 and the historically black West Virginia State University at 18. In 1938, as a graduate student, she became one of three students—and the only woman—to desegregate West Virginia's state college. In 1953, Johnson was hired by NACA and, five years later, NACA became NASA thanks to the Space Act of 1958. The movie muddies the timeline a bit, but Johnson's first big NASA assignment was computing the trajectories for Alan Shepard's historic flight in 1961. Johnson and her team's job was to trace out in extreme detail Freedom 7's exact path from liftoff to splashdown.

Could cold spot in the sky be a bruise from a collision with a parallel universe? Scientists have long tried to explain the origin of a mysterious, large and anomalously cold region of the sky. In 2015, they came close to figuring it out as a study showed it to be a “supervoid” in which the density of galaxies is much lower than it is in the rest of the universe. However, other studies haven’t managed to replicate the result. Now new research led by Durham University, submitted for publication in the Monthly Notices of the Royal Astronomical Society, suggests the supervoid theory doesn’t hold up.

Carpenter bee - Wikipedia Carpenter bees are species in the genus Xylocopa of the subfamily Xylocopinae. The genus includes some 500 species in 31 subgenera.[1] Members of the related tribe Ceratinini sometimes are called "small carpenter bees". The common name "carpenter bee" derives from their nesting behavior; nearly all species burrow into hard plant material such as dead wood or bamboo. The main exceptions are species in the subgenus Proxylocopa; they dig nesting tunnels in suitable soil. Schrödinger’s Cat: Explained Erwin Schrödinger was born in Vienna on August 12, 1887 and was awarded the Nobel Prize in Physics in 1933. He is best known for his work regarding quantum theory, particularly about his thought experiment involving a cat in order to explain the flawed interpretation of quantum superposition. The Copenhagen Interpretation of quantum mechanics essentially states that an object in a physical system can simultaneously exist in all possible configurations, but observing the system forces the system to collapse and forces the object into just one of those possible states. Schrödinger disagreed with this interpretation.

Chinese Scientists Successfully Teleported a Particle to Space When it comes to weird quantum effects, none is weirder than quantum teleportation. Scientists can—and have—used the unique and complicated physics of quantum mechanics to instantaneously teleport small particles across great distances. Now, a Chinese team has broken the distance record by teleporting particles to a satellite in space. When we talk about teleportation, we should be clear about exactly what that means.