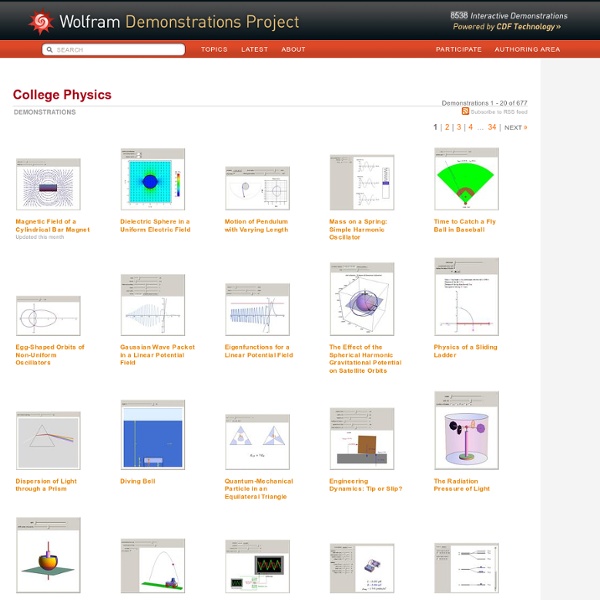 Jupiter Slingshot Instructions: (after you've read these, click here to get a bigger picture.) Click and drag the arrow to change the direction of launch of the spaceship. Choose Jupiter's path distance (the shortest distance of the initial launch point from Jupiter's orbital path) and initial speed of the spaceship. RESET: puts Jupiter into ready position at far left START: Jupiter begins moving at its orbital speed SHOOT: launches the spaceship Zoom in or out to see the full orbit of the spaceship! You can also right-click on the movie and zoom in to get a better view of the objects. Note: Jupiter moves through a distance equal to its diameter in about 3 hours. *** This flashlet demonstrates in a semiquantitative way how a properly directed spaceship can pick up energy from a moving planet. Jupiter Data : Chinese version Copyright © Michael Fowler 2004

Moving slabs [This Dynamic Earth, USGS] The layer of the Earth we live on is broken into a dozen or so rigid slabs (called tectonic plates by geologists) that are moving relative to one another. "Historical perspective" Hidden Video Courses in Math, Science, and Engineering » Data Wrangling Blog Hidden Video Courses in Math, Science, and Engineering Over the last few years, a large number of open courseware directories and video lecture aggregators have popped up on the web. These sites often include introductory courses and research seminars, but it can be difficult to find full courses covering advanced topics. For budgetary and copyright reasons, most upper level and smaller attendance courses are not recorded, or are only offered online for a fee. Many schools provide access-restricted videos of advanced courses to current students, but do not make them available to the wider community. What motivated me to pull this together? It is difficult to find advanced math and physics courses that fit into a full time work schedule. The approach I came up with was to load an Archos video player with video lectures from the web (an iphone would probably work just as well). Enough motivation, on with the links: Links to Advanced Courses with Complete Video Lectures: Physics Mathematics

The Oh-My-God Particle by John Walker January 4, 1994 Fly's Eye The University of Utah operates a cosmic ray detector called the Fly's Eye II, situated at the Dugway Proving Ground about an hour's drive from Salt Lake City. The Fly's Eye consists of an array of telescopes which stare into the night sky and record the blue flashes which result when very high energy cosmic rays slam into the atmosphere. From the height and intensity of the flash, one can calculate the nature of the particle and its energy. On the night of October 15, 1991, the Fly's Eye detected a proton with an energy of 3.2±0.9×1020 electron volts.[1,2] By comparison, the recently-canceled Superconducting Super Collider (SSC) would have accelerated protons to an energy of 20 TeV, or 2×1013 electron volts—ten million times less. All evidence points to these extremely high energy particles being protons—the nuclei of hydrogen atoms. Microbial Mass How Fast? How fast was it going? And thus, approximately: v = 0.9999999999999999999999951 c Quicktime

Space-Time Diagrams Any discussion of cosmology requires a careful consideration of what we can see and when we can see it. A good way to keep track of these concepts is the space-time diagram. A space-time diagram is nothing more than a graph showing the position of objects as a function of time. The usual convention is that time runs up the diagram, so the bottom is the past, or early times, and the top is the future, or late times. The picture above shows a space-time diagram of the Earth going around the Sun. The line representing the position of the Earth as a function of time is called a worldline. The space-time diagram above shows particles with different velocities. Because the speed of light is special in relativity, space-time diagrams are often drawn in units of seconds and light-seconds, or years and light-years, so a unit slope [45 degree angle] corresponds to the speed of light. Back to the Cosmology Tutorial