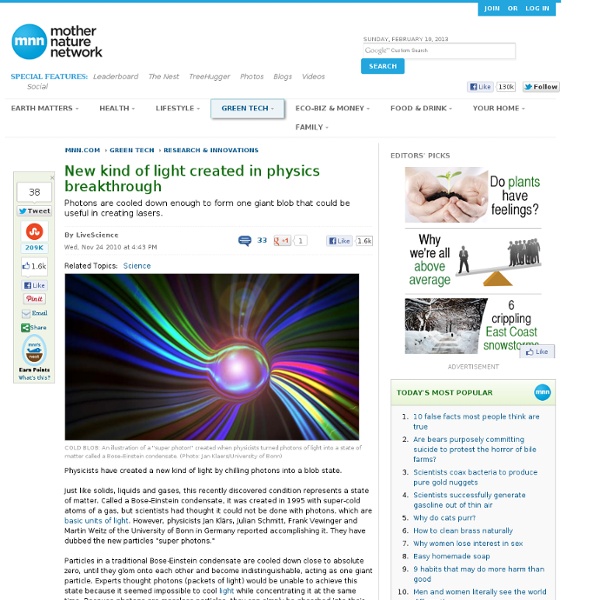 Physicists have created a new kind of light by chilling photons into a blob state. Just like solids, liquids and gases, this recently discovered condition represents a state of matter. Called a Bose-Einstein condensate, it was created in 1995 with super-cold atoms of a gas, but scientists had thought it could not be done with photons, which are basic units of light. However, physicists Jan Klärs, Julian Schmitt, Frank Vewinger and Martin Weitz of the University of Bonn in Germany reported accomplishing it. Particles in a traditional Bose-Einstein condensate are cooled down close to absolute zero, until they glom onto each other and become indistinguishable, acting as one giant particle. The scientists needed to find a way to cool the photons without decreasing their numbers. "Many scientists believed that it would not be possible, but I was pretty sure that it would work," Weitz told LiveScience. The mirrors trapped the photons by keeping them bouncing back and forth in a confined state.

New estimate for alien Earths: 2 billion in our galaxy alone Roughly one out of every 37 to one out of every 70 sunlike stars in the sky might harbor an alien Earth, a new study reveals. These findings hint that billions of Earthlike planets might exist in our galaxy, researchers added. These new calculations are based in data from the Kepler space telescope, which in February wowed the globe by revealing more than 1,200 possible alien worlds, including 68 potentially Earth-size planets. The spacecraft does so by looking for the dimming that occurs when a world transits or moves in front of a star. Scientists at NASA's Jet Propulsion Laboratory in Pasadena, Calif., focused on roughly Earth-size planets within the habitable zones of their stars — that is, orbits where liquid water can exist on the surfaces of those worlds. "This means there are a lot of Earth analogs out there — two billion in the Milky Way galaxy," researcher Joseph Catanzarite, an astronomer at NASA's Jet Propulsion Laboratory, told SPACE.com. Related at SPACE.com: