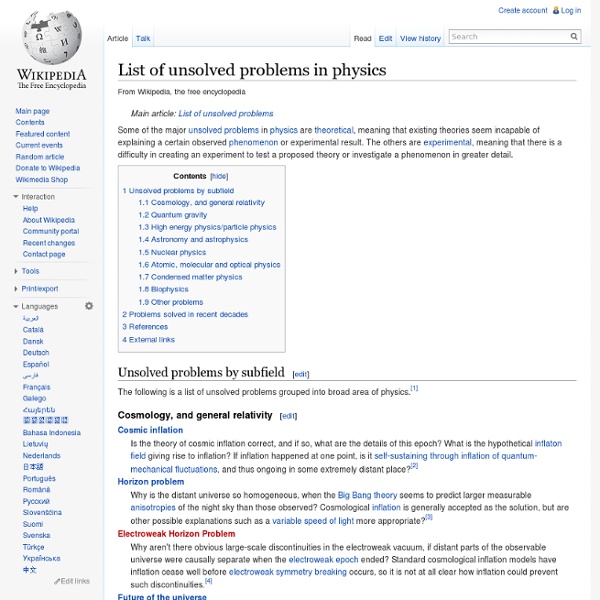 Some of the major unsolved problems in physics are theoretical, meaning that existing theories seem incapable of explaining a certain observed phenomenon or experimental result. The others are experimental, meaning that there is a difficulty in creating an experiment to test a proposed theory or investigate a phenomenon in greater detail. Unsolved problems by subfield[edit] The following is a list of unsolved problems grouped into broad area of physics.[1] Cosmology, and general relativity[edit] Cosmic inflation Is the theory of cosmic inflation correct, and if so, what are the details of this epoch? Horizon problem Electroweak Horizon Problem Why aren't there obvious large-scale discontinuities in the electroweak vacuum, if distant parts of the observable universe were causally separate when the electroweak epoch ended? Future of the universe Is the universe heading towards a Big Freeze, a Big Rip, a Big Crunch or a Big Bounce? Gravitational wave Can gravitational waves be directly detected? .

Names Proposed for New Elements on Periodic Table The International Union of Pure and Applied Chemistry — the scientific body that is the keeper of the list of elements — unveiled Thursday the proposed names for elements 114 and 116: flerovium (atomic symbol Fl) and livermorium (atomic symbol Lv). If you do not like them, now is the time to voice your objections. The chemistry union will have a five-month comment period open to anyone. “We believe we have to let the world respond,” said Terry A. Renner, the chemistry union’s executive director. Thermometer measures temperature to 30 billionths of a degree The thermometer is three times more accurate than current systemsIt works by circulating green and red light around a disc-shaped crystalAs the crystal heats up, the red light slows down compared to green lightBy forcing the light to circulate thousands of times, scientists can measure the difference in speed - and as a result temperature - with great precision By Ellie Zolfagharifard Published: 13:15 GMT, 2 June 2014 | Updated: 14:46 GMT, 2 June 2014 Scientists have developed the world’s most sensitive thermometer capable of measuring temperature to 30 billionths of a degree. The device, named the nano-Kelvin thermometer, is three times more precise than the best thermometers in existence.

Ars Electronica Katalogartikel The Noise of the Observer Peter Weibel Modern statistical information theory has its roots in thermodynamics. The relation between information and entropy as "missing information" (L. How to turn darkness into light Quantum mechanics tells us that the vacuum is not empty but is filled with virtual particles that pop into and out of existence. Normally these particles are hidden from our view, but now a team of physicists has used the electrical equivalent of an ultrafast mirror to convert virtual photons into real electromagnetic radiation. Known as the dynamical Casimir effect, it was first predicted more than 40 years ago. The static Casimir effect, put forward by Dutch physicist Hendrik Casimir in 1948, involves two perfectly reflecting parallel mirrors that, when placed in a vacuum, will be attracted to one another.

Oxford University scientists create a 'SUPERNOVA' in the lab A team from Oxford University have recreated a supernova explosionThe experiment was performed with the UK's Vulcan laser facilityThey heated a rod to millions of degrees by focusing 3 laser beams on itThe rod then exploded into a surrounding gas, mimicking the interaction between a star going supernova and the interstellar mediumResults prove that supernovas do not expand uniformly as once thoughtCould also solve the mystery of how magnetic fields formed in the universe By Jonathan O'Callaghan Published: 11:24 GMT, 2 June 2014 | Updated: 14:34 GMT, 2 June 2014 A team of scientists have recreated a supernova in a laboratory. Using laser beams 60,000 billion times more powerful than a laser pointer, the Oxford University team made scaled supernova explosions on a table-top.

3 New Heavy Elements Named: Darmstadtium, Roentgenium, Copernicium This article was updated Sunday 11/6 2:00pm. The periodic table of elements just got a bit heftier today (Nov. 4), as the names of three new elements were approved by the General Assembly of the International Union of Pure and Applied Physics. Elements 110, 111 and 112 have been named darmstadtium (Ds), roentgenium (Rg) and copernicium (Cn). These elements are so large and unstable they can be made only in the lab, and they fall apart into other elements very quickly. The physics of water drops and lift-off The flow of fluids is one of the most complex, beautiful, and amazing things in physics. Slow motion pictures of drops landing on water or of two fluids mixing can be simply gorgeous. Even more amazing, the basic physics of fluid flow was worked out way back in the 19th century.

Shockwave traffic jam recreated for first time - tech - 04 March 2008 Video: Infuriating traffic jams that appear for no reason can be replicated on the test track (Footage courtesy Mathematical Society of traffic flow in Japan) Traffic that grinds to a halt and then restarts for no apparent reason is one of the biggest causes of frustration for drivers. Now a team of Japanese researchers has recreated the phenomenon on a test-track for the first time. The mathematical theory behind these so-called "shockwave" jams was developed more than 15 years ago using models that show jams appear from nowhere on roads carrying their maximum capacity of free-flowing traffic - typically triggered by a single driver slowing down. After that first vehicle brakes, the driver behind must also slow, and a shockwave jam of bunching cars appears, travelling backwards through the traffic.

Scale Relativity Nottale's work can not be qualified "theory", to the best it is "poetry". He does have ideas, but implements them only with vague analogies. It is unfortunate. Creating Quantum Matter By Marlene Cimons, National Science Foundation Experimental physicist Markus Greiner always is searching for new and interesting states of matter. “In the long run, these states of matter might lead to new materials with fantastic properties you can’t even imagine yet,” he says. Greiner, associate physics professor at Harvard University and the recent winner of a prestigious $500,000 “no strings attached” MacArthur Fellowship--popularly known as a “genius” grant--wants to better understand the spatial organization of ultra cold atoms with the goal of learning more about condensed matter physics and quantum mechanics. “It’s pretty cool stuff,” he says, no pun intended.