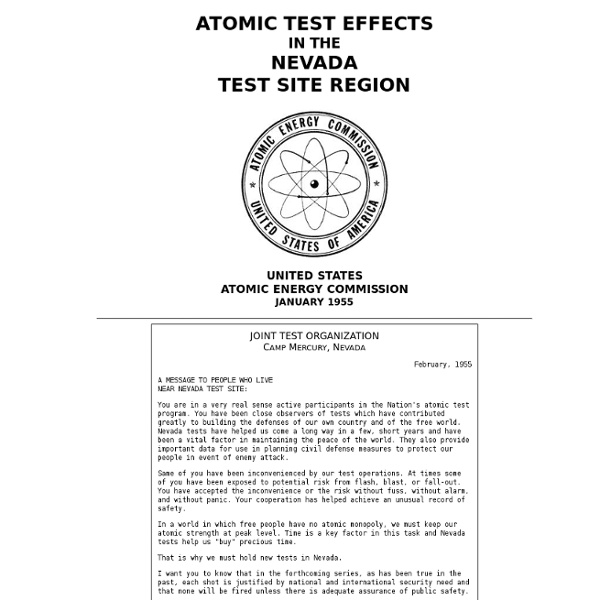 Thirty-one atomic fission weapons, weapon prototypes, or experimental devices were fired in Nevada from January 1951 to January 1955. All were relatively small in explosive power. They ranged from less than one kiloton up to considerably less than 100 kilotons. (A kiloton is equal to 1,000 tons of TNT.) The forces released by test detonations in Nevada are very small compared to the tremendous forces released by the large fission and hydrogen weapons tested in the Pacific. Despite their relatively low yield, Nevada tests have clearly demonstrated their value to all national atomic weapons programs. Each Nevada test has successfully added to scientific knowledge needed for development and for use of atomic weapons, and needed to strengthen our defense against enemy weapons. Staging of some tests in Nevada, instead of carrying out all of them in the distant Pacific, also resulted in major savings in time, the most important factor, and in manpower, and money. Exposure to Flash The U.

Great Workout Songs Get up early in the morning, hit the gym, force yourself to run frantically on the treadmill (for the sake of losing few pounds), tired but still bringing yourself to try out the other exercising equipment (again for the sake of losing few pounds)... Yaaawwwnnn! Having to do this everyday sounds so boring. Top Workout Songs for All Here are some great workout songs that you can play while working out in the gym. Great Workout Songs for Men Start Me Up - The Rolling StonesIron Man - Black SabbathDon't Stop Believin - JourneyDoll-Dagga Buzz-Buzz Ziggety-Zag - Marilyn MansonBulls on Parade - Rage Against the MachineBed Rock - Young MoneyJoker and the Thief - WolfmotherVictory - Puff Daddy ft. The Elegant Universe: Pt 1 The Elegant Universe: Part 3 PBS Airdate: November 4, 2003 NARRATOR: Now, on NOVA, take a thrill ride into a world stranger than science fiction, where you play the game by breaking some rules, where a new view of the universe pushes you beyond the limits of your wildest imagination. This is the world of "string theory," a way of describing every force and all matter from an atom to earth, to the end of the galaxies—from the birth of time to its final tick, in a single theory, a "Theory of Everything." Our guide to this brave new world is Brian Greene, the bestselling author and physicist. BRIAN GREENE (Columbia University): And no matter how many times I come here, I never seem to get used to it. NARRATOR: Can he help us solve the greatest puzzle of modern physics—that our understanding of the universe is based on two sets of laws that don't agree? NARRATOR: Resolving that contradiction eluded even Einstein, who made it his final quest. S. BRIAN GREENE:The atmosphere was electric. S. S.

How Quantum Suicide Works& ­­A man sits down before a gun, which is pointed at his head. This is no ordinary gun; i­t's rigged to a machine that measures the spin of a quantum particle. Each time the trigger is pulled, the spin of the quantum particle -- or quark -- is measured. Depending on the measurement, the gun will either fire, or it won't. If the quantum particle is measured as spinning in a clockwise motion, the gun will fire. Nervously, the man takes a breath and pulls the trigger. Go back in time to the beginning of the experiment. But, wait. This thought experiment is called quantum suicide.

6 Life-Changing Uses for Binder Clips (That You Could've Easily Thought Of) from Look What I Found Yes, it may seem like an ordinary binder clip. And it is. Make no mistake -- it will keep your papers organized with the best of them. The BEST. But it's so much more. 1. (via) 2. (via) 3. iPod Dock Just go to your local Apple Store, pretend like you're interested in all the MacBook Airs, and walk right out. (via) 4. (via) 5. (via) 6. (via) Before I Die What matters most to you Interactive public art project that invites people to share their personal aspirations in public. After losing someone she loved and falling into depression, Chang created this experiment on an abandoned house in her neighborhood to create an anonymous place to help restore perspective and share intimately with her neighbors. 2011, New Orleans, LA. Cordoba, Argentina. Najaf, Iraq. Brooklyn, NY. Almaty, Kazakhstan Savannah, GA. Pohang City, South-Korea. San Francisco, CA. Johannesburg, South Africa. Cordoba, Argentina.