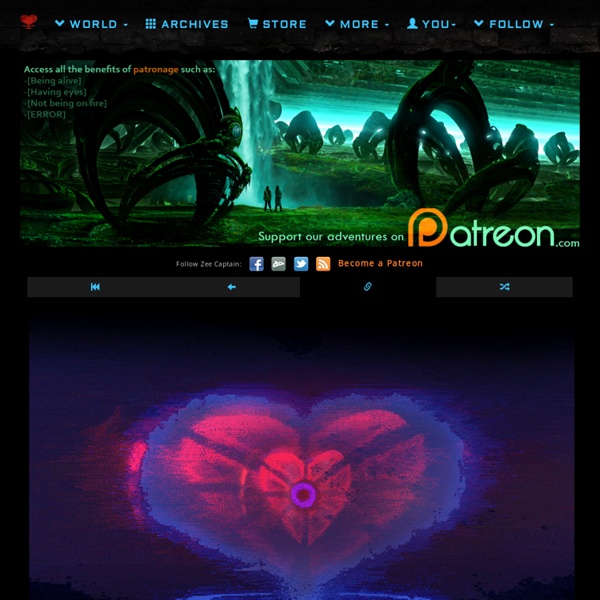 Unsounded September 23, 2016, at 12:00 AM With these two NSFW pages and a Ch12 preview, that's a wrap for chapter 11! Unsounded's been going since July of 2010. Petite Symphony KnuckleUp! As many of you have probably already noticed, Godai has started up another regular comic to post on Sundays. Join Rushana, Hawke, and Moon as they travel across the galaxy tracking down shards of a magical talisman in KnuckleUp! Also, Year of the Cow has been moved to hiatus for the time being while Simon and Dew tackle some life events. We’ll keep you posted on updates of it’s return to active status.

1] E3 Nightmare Begins Well, dont be too upset if you find that nothing really works here yet... largo and I havent finished the backbone of the site. We should be launching the new version of the site, complete with four comics, on monday (barring unforseen disasters - a notably regular occurance in my life). So, in short, we aren't ready for you yet, but you are welcome to look around, where you can. Notice something different? If you saw the original versions of megatokyo, you'll see that i was originally intending to ink all of them.

DELVE Into Fantasy Hey guys~! Long time no news post! Phew, sorry about that! Things have been crazy around here- between con season, getting sick, and everything else.. but I’m trying to get back on the ball and get things rolling! Todd Allison & the Petunia Violet Manga RELEASED:Apr 19, 2011 LAST UPDATED:Apr 19, 2011 BLANKS STATUS:Missing (28 of 28) Petunia delivers a letter for Todd Allison and she thinks about how mysterious he is. reMIND I don’t usually bring up world events on this blog but I just can’t help myself. This is just too big to ignore. So we all know about the current war going on in Syria and Damascus (the capital of Syria) right? You have probably been hearing about all the drama between Israel, Russia, China and the US and everyone else right? Well, have you ever read Isaiah 17?

Chester 5000 XYV Friday — April 15th, 2016 Chester 5000 Valentines! February 13th, 2016 I made some Chester valentines for you! Outsider: A full-color science fiction comic Outsider posts new pages (when available) on Mondays, but updates can be irregular, so I encourage you to use the RSS feed if you're interested in keeping up. [WIP Thread] 22 August 2013: Just a note to let everyone know I'm still here, the comic isn't dead. I'm just going through a patch where it's hard to find free time. I'm still working on the 3D sets for the next pages, but hopefully it won't be long before I can resume posting pages.