Moviemaker. Make digital movies online. Formerly Dfilm. Make. Online Comic Creators. Loopster.com - Free Online Video Editor. Comics in the Classroom: Why Comics? Throughout the month of August, Teach.com and Reading With Pictures are bringing you Comics in the Classroom, a blog series about using comics in education, including why graphic novels are complex texts as defined by the Common Core Standards, how to use graphic texts to teach in the content areas, how and where to find the best graphic texts, and more. 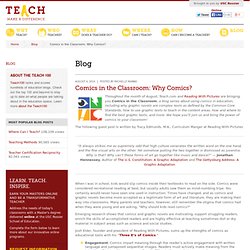 We hope you’ll join us and bring the power of comics to your classroom! The following guest post is written by Tracy Edmunds, M.A., Curriculum Manger at Reading With Pictures “It always strikes me as supremely odd that high culture venerates the written word on the one hand, and the fine visual arts on the other. Yet somehow putting the two together is dismissed as juvenilia.

Why is that? When I was in school, kids would slip comics inside their textbooks to read on the side. Josh Elder, founder and president of Reading With Pictures, sums up the strengths of comics as educational tools with his “Three E’s of Comics.” Accomplished Readers. MAKE BELIEFS COMIX! Online Educational Comic Generator for Kids of All Ages. Fastest Way to Create Comic Strips and Cartoons - Toondoo. Stripgenerator.com - Comic Creating Community. Movie-making for everyone. 10 Ideas for Classroom Video Projects. “… ten years ago, not one student in a hundred, nay, one in a thousand, could have produced videos like this. 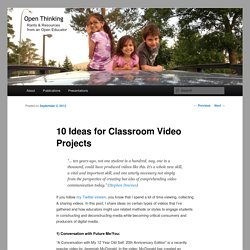 It’s a whole new skill, a vital and important skill, and one utterly necessary not simply from the perspective of creating but also of comprehending video communication today.” (Stephen Downes) If you follow my Twitter-stream, you know that I spend a lot of time viewing, collecting & sharing videos. In this post, I share ideas on certain types of videos that I’ve gathered and how educators might use related methods or styles to engage students in constructing and deconstructing media while becoming critical consumers and producers of digital media. 1) Conversation with Future Me/You: “A Conversation with My 12 Year Old Self: 20th Anniversary Edition” is a recently popular video by Jeremiah McDonald. Another angle for this activity could be to create a video or a dialogue with a literary, historical or popular media character. 2) Genre Shifting Movie Trailers: 5) Stop Motion:

Teaching with Vine. Digital Storytelling Samples - Created with Frames. 10 Video Projects Every Teacher Should Try. Making classroom movies has gotten much easier now that cell phones, tablets and other devices feature video capabilities that are high quality and simple to use. 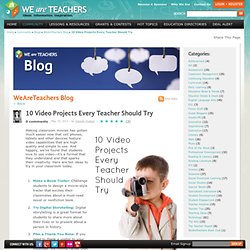 And happily, we’ve found that students love to use video—it’s a format that they understand and that sparks their creativity. Here are ten ideas to try in your classroom today. Make a Book Trailer: Challenge students to design a movie-style trailer that excites their classmates about a must-read novel or nonfiction book. Try Digital Storytelling: Digital storytelling is a great format for students to share more about their lives or to present about a person in history. Film a Thank You Note: If you need to thank a visitor to your class or an awesome parent volunteer, try filming rather than writing a thank you note. What’s the best video project you’ve ever done? Subtitle movie. Shotclip: Free Online Video Editor. Anyone can make cool videos!

Making Videos on the Web - A Guide for Teachers. Video Tools & Tips for Teachers. Education in a technological world) During this half term, I've been busy working with our three lower school classes on a rather special project in their ICT lessons. 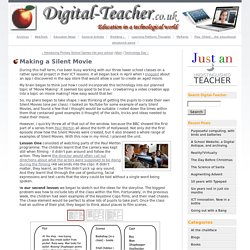 It all began back in April when I blogged about an app I discovered in the app store that would allow a user to create an aged movie. My brain began to think just how I could incorporate this technology into our planned topic of 'Movie Making'. It seemed too good to be true - crowbarring a video creation app into a topic on movie making? How easy would that be! So, my plans began to take shape. However, I quickly threw all of that out of the window, because the BBC showed the first part of a series from Paul Merton all about the birth of Hollywood. Moovly - Create Animated Content like a Pro. Caption, translate, subtitle and transcribe video. Moviemaker. Make digital movies online. Formerly Dfilm. Make. Animated Video Production. Voki Home.

PowToon. WriteComics.com - Create your own comics! Bubbl.us - brainstorm and mind map online. Blabberize.com - Got a picture? Blabberize it!