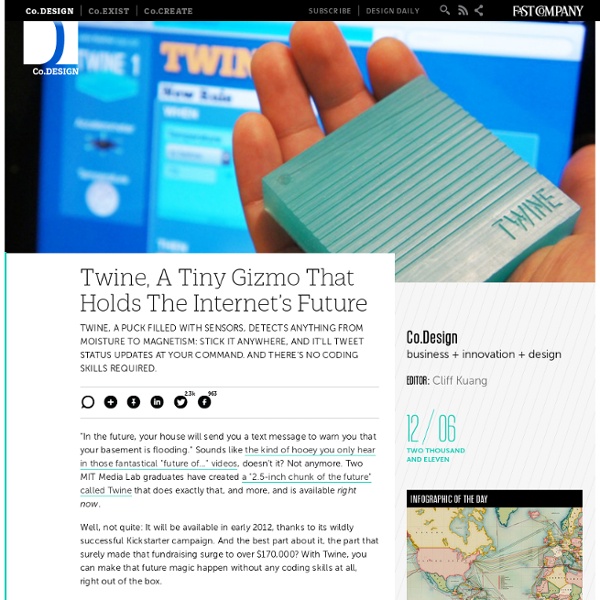 "In the future, your house will send you a text message to warn you that your basement is flooding." Sounds like the kind of hooey you only hear in those fantastical "future of…" videos, doesn’t it? Not anymore. Two MIT Media Lab graduates have created a "2.5-inch chunk of the future" called Twine that does exactly that, and more, and is available right now. Well, not quite: It will be available in early 2012, thanks to its wildly successful Kickstarter campaign. Here’s the basic idea behind Twine: Software and physical stuff should be friends. Twine is a small slab of gray plastic that hides that PhD’s worth of engineering magic--a bunch of internal and external sensors and a Wi-Fi hub--"the simplest possible way to get the objects in your life texting, tweeting or emailing," in Carr and Kestner’s words.

Cons. Rep: When HELOCs freeze/shrink What to do if your home-equity line of credit is iced In May 2008, Steve Ahern got ready to renovate his home. "I refinanced my mortgage and kept my original home-equity line of credit," says Ahern, president of Wealth Management Advisors in Tewksbury, Mass. "A few weeks later, Bank of America reduced the amount available on my home-equity line by $25,100." Ahern is by no means alone. Limited access The pullback is a response to falling home values. Bank of America declined to discuss its reasons for trimming Ahern's credit line, but a spokesman did say that the bank was limiting customer access to HELOC accounts "in areas of the country with significant home-value declines." If your line of credit has been affected, you might not need to do anything if you have cash reserves and no immediate plans for a major expense that would require drawing on it. Appealing a freeze But if you'd like to restore your credit line, call your lender and ask how to do it. Here today, gone tomorrow

When Homeowners Insurance Won't Protect You Shortly after Aditi Haridat's parents bought the home of their dreams, a lamp overheated while they were out of the house. Not only did they lose their pet cockatiel in the resulting fire, but the inside of their home was partially destroyed. That was only the beginning of their nightmare. After their insurance company arranged for a contractor to redo the inside of the house, that contractor ended up inadvertently causing a major flood in the basement, which led to a black mold infestation. Haridat's parents, who live in New Jersey, were frustrated when the insurance company offered less than the estimated cost to repair the home. Since homeowners insurance is something many people buy but few are forced to actually use, the average consumer is far from being an expert in comparing policies in advance or navigating the claims process when the unexpected does happen. "It's very difficult for consumers to read a policy and understand it," says J. Check out buyer's guides.