Advice on how to stay motivated during your thesis? : architecture. Kengo Kuma Wins Competition to Design Metro Station in Paris. Kengo Kuma and Associates has won an international competition to design the new Saint-Denis Pleyel train station in France. 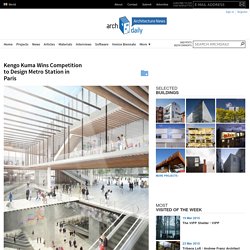 Like Enric Miralles Benedetta Tagliabue and Elizabeth de Portzamparc, Kengo Kuma will design one of four stations that will be built as part of the ambitious Grand Paris Express (GPE) project which seeks to modernize the existing transport network and create an automatic metro that will connect new neighborhoods to Paris. The winning project aims to serve as a multi-level extension of public space that will connect two districts currently separated by the large railway network of the Parisian North station. Read on to learn more about Kengo Kuma’s winning proposal. “Multiple levels continue in spiral, so the station functions as a complex that brings in streets in vertical layer,” describes Kengo Kuma. CAAT Studio Propose Large Scale Commercial Centre in Isfahan. George Street Concept Design by Gehl Architects.

This month, the City Hall of Katowice is going to issue a limited tender for a detailed design of the Market Sq. – Roundabout area’s public spaces and a road infrastructure. 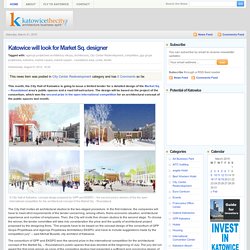 While contemporary cultural centres are often architecturally and urbanistically introverted, with events and activities hidden behind closed doors, this project adopts the strategy of transparency. 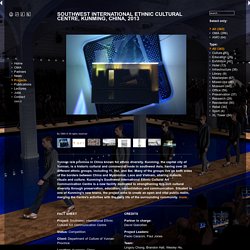 Through a large ribbed glass façade facing Chunrong Street, and five visible layers of activity throughout the building, the work of the Centre is visible from the public realm, and the public realm is visible from inside the building. A continuous dialogue is established between the public and the cultural pursuits of the ethnic groups. Programs for performance, exhibitions, production and communication of the cultures are combined into one single rectangular volume (95 x 57 x 40) to create the critical mass required to trigger a vital cultural presence. White Architects, along with Ghilardi + Hellsten Arkitekter have just been selected as the winner of the competition to relocate the City Center of Kiruna, located in the north of Sweden. 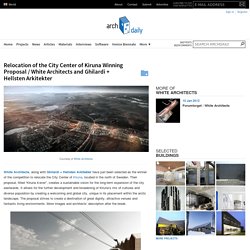 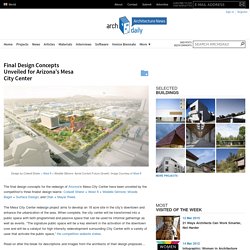 The Mesa City Center redesign project aims to develop an 18 acre site in the city’s downtown and enhance the urbanization of the area. Development Banks of the Meurthe / Atelier Cite Architecture (340044) Why Our Ancestors Built Round Houses – and Why it Still Makes Sense to Build Round Structures Today Navaho hut. Why did our ancestors build round? 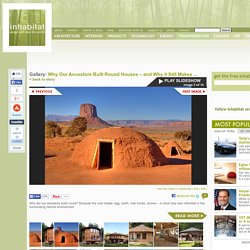 Because the ovid shape- egg, earth, tree trunks, stones -- is what they saw reflected in the surrounding natural environment. Wind and tsunami waves move naturally around a round building rather than getting caught at (and potentially ripping off) corners. A rounded roof avoids ‘air-planing’- a situation where a strong wind lifts the roof structure up and off of the building. There are dozens of interconnected points in a round home.

These are sites where builders can connect parts of the building together. All Tutorials. Greater Noida Metro to have 21 stations. Black Friday Special: The 12 Most Spectacular Malls in the World. The arrival of Black Friday presents the opportunity to experience shopping centers in their full glory. 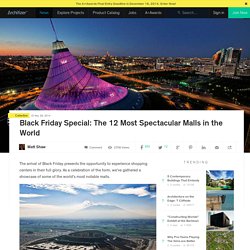 As a celebration of the form, we've gathered a showcase of some of the world's most notable malls. Add To Collection Save this image to a collection Image via stroi.mos.ru. JAJA Wins Second Prize for Swedish Housing and Market Hall Hybrid. JAJA Architects has won second prize in an open competition for a combined affordable housing and market hall in the heart of Katrineholm, Sweden. 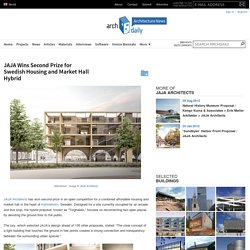 Designed for a site currently occupied by an arcade and bus stop, the hybrid proposal, known as “Torghallen,” focuses on reconnecting two open plazas by devoting the ground floor to the public. The jury, which selected JAJA’s design ahead of 135 other proposals, stated: “The clear concept of a light building that touches the ground in few points creates a strong connection and transparency between the surrounding urban spaces.” These Designers Are Remaking the Portfolio Into a Client Magnet Secret Weapon. For established firms, freelance professionals, and students just starting out, today’s portfolio needs to be more than just the simple presentation of past work. 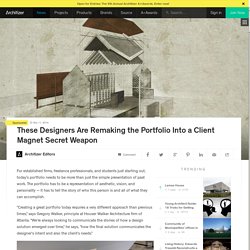 The portfolio has to be a representation of aesthetic, vision, and personality — it has to tell the story of who this person is and all of what they can accomplish. “Creating a great portfolio today requires a very different approach than previous times,” says Gregory Walker, principle at Houser Walker Architecture firm of Atlanta. “We’re always looking to communicate the stories of how a design solution emerged over time,” he says, “how the final solution communicates the designer’s intent and also the client’s needs.” What makes a town center? What makes a town center? 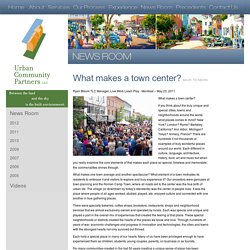 If you think about the truly unique and special cities, towns and neighborhoods around the world, what places comes to mind? New York? London? Is not available. R204DESIGN. A simple, clean box by day, a glowing backdrop of colors by night. This mixed-use project in Switzerland features a high-end restaurant on the ground floor, 2 floors of office space, residential flats, and a rooftop garden. Read More >> Gan Bei! Cheers! Qingdao International Beer Festival 5 Season Park. Scroll.in - News. Politics. Culture. The laundry list of Rs 100 crore projects rattled off by finance minister Arun Jaitley during the budget speech might have surprised people, but there was one mention of 100 that was much less surprising: smart cities.

The grandiose promise of building 100 smart cities has been part of Modi’s acche din vision from the outset, and it would have been surprising if the budget had not made some mention of it. In the event, Jaitley did promise 100 cities to be built for what the Bharatiya Janata Party is calling the neo-middle class – those who have just emerged from above the poverty line and are striving to ensure they remain there. Less promising was the amount he allocated to the project: Rs 7,060 crore, which is a little over Rs 70 crore per city. Has Mall Culture Really Arrived in India? - India Opines. Construction begins on OMA’s Bryghusprojektet in Copenhagen. OMA has broke ground on a 27,000 square meter, mixed-use development on the banks of Copenhagen’s historic waterfront in the culturally rich Slotsholmen district. Upon its completion in early 2017, Bryghusprojektet will become the new headquarters for the Danish Architecture Centre (DAC), while also providing housing, offices, retail, a restaurant, and an urban park.

The competition-winning project will be open in Beijing through November 2013 and will be installed in six other cities in China. Outdoor Room serves as an engaging urban public space and a barometer of Beijing’s well-documented air quality levels. BA_sociology_indian_society.pdf. Reference Categories Public Buildings. DMAA Wins Competition for Mixed-Use, Cultural Complex in Munich. Vienna-based Delugan Meissl Associated Architects (DMAA) has been announced as winner of a competition to design a mixed-use, cultural complex in Munich. Dubbed Hanns Seidel Platz, the 40,500-square-meter scheme will provide a 160-unit “living tower,” office space, a civic center, concert hall and large public plaza for the district of Neuperlach.