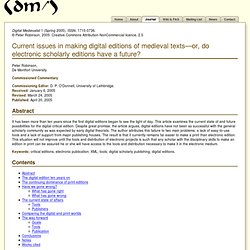 P. O'Donnell, University of Lethbridge. Received: January 6, 2005 Revised: March 24, 2005 Published: April 20, 2005 [ Skip to Navigation | Return to Colophon ] Abstract It has been more than ten years since the first digital editions began to see the light of day. Forums. ToolDatabase. A Digital Tool Box for Historians on Pinterest. Do more with journal articles. Vis a text. Medieval Manuscripts, Hypertext and Reading. Visions of Digital Editions. How was a medieval manuscript meant to be read? 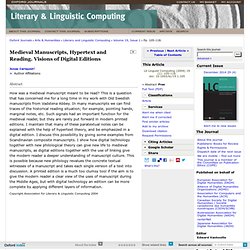 This is a question that has concerned me for a long time in my work with Old Swedish manuscripts from Vadstena Abbey. In many manuscripts we can find traces of the historical reading situation; for example, pointing hands, marginal notes, etc. Such signals had an important function for the medieval reader, but they are rarely put forward in modern printed editions. Digital-medieval-studies-oct22_20141. Monastic Studies Resources - Digital Manuscripts. Digital editions of medieval texts: Opportunities and challenges. I gave a CAMPS Lab on 23 September 2011 with the title above. 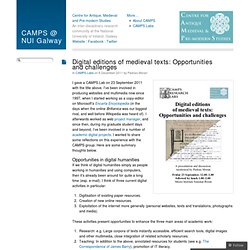 I’ve been involved in producing websites and multimedia now since 1997, when I started working as a copy-editor on Microsoft’s Encarta Encyclopedia (in the days when the online Brittanica was our biggest rival, and well before Wikipedia was heard of). I afterwards worked as web project manager, and since then, during my graduate student days and beyond, I’ve been involved in a number of academic digital projects. I wanted to share some reflections on this experience with the CAMPS group.

Here are some summary thoughts below. The DM Project. The DM project is pleased to announce that it has been awarded a Digital Humanities Implementation Grant for 2013-14 by the National Endowment for the Humanities. 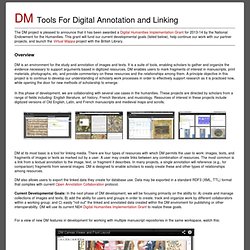 This grant will fund our current developmental goals (listed below), help continue our work with our partner projects, and launch the Virtual Mappa project with the British Library. Overview DM is an environment for the study and annotation of images and texts. It is a suite of tools, enabling scholars to gather and organize the evidence necessary to support arguments based in digitized resources. DM enables users to mark fragments of interest in manuscripts, print materials, photographs, etc. and provide commentary on these resources and the relationships among them. 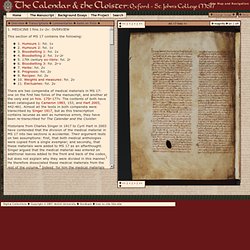 Sermonescatholic02aelfuoft. Digital Projects : Centre for Medieval and Early Modern Studies : The University of Western Australia. Digital Medieval Manuscript Editions. Medieval and Modern Manuscripts in the Digital Age (MMSDA) We are very pleased to announce the fifth year of this course, now expanded and funded by the Digital Scholarly Editions Initial Training Network (DiXiT), and run by DiXiT in collaboration with the Institute of English Studies (London), King’s College London, the University of Cambridge, and the Warburg Institute. 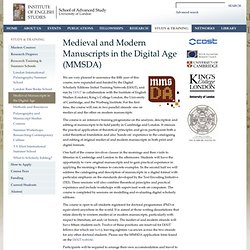 For the first time, the course will run in two parallel strands: one on medieval and the other on modern manuscripts. Digital Image Archive of Medieval Manuscripts : Royal Holloway and Bedford New College. Scholarly Digital Editions. Welcome to the Parker Library on the Web. Medieval & Renaissance Manuscripts Collection: Ms. Codex 1056 - Catholic Church - [Book of hours : use of Rouen] Ms. codex. 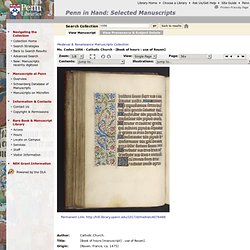 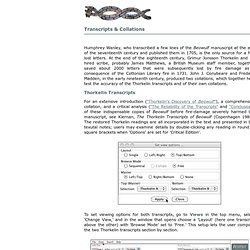 At the end of the eighteenth century, Grimur Jonsson Thorkelin and his hired scribe, probably James Matthews, a British Museum staff member, together saved about 2000 letters that were subsequently lost by fire damage as a consequence of the Cottonian Library fire in 1731. John J. Conybeare and Frederic Madden, in the early nineteenth century, produced two collations, which together help test the accuracy of the Thorkelin transcripts and of their own collations. Mapping Medieval Chester: Mapping Medieval Chester: place and identity in an English borderland city c.1200-1500. The Auchinleck Manuscript.

The Auchinleck Manuscript provides a unique insight into the English language and literature that Chaucer and his generation grew up with and were influenced by Contents Main URL auchinleck.nls.uk Description. 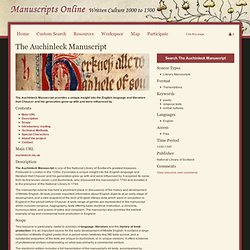 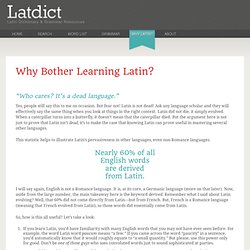 It’s a dead language.” Yes, people still say this to me on occasion. But fear not! Latin is not dead! Ask any language scholar and they will effectively say the same thing when you look at things in the right context. This statistic helps to illustrate Latin’s pervasiveness in other languages, even non-Romance languages: I will say again, English is not a Romance language.