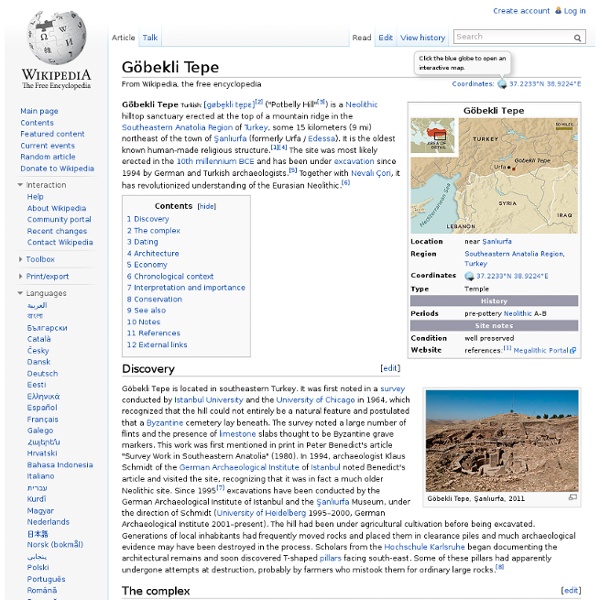 The function of the structures is not yet clear. The most common opinion, shared by excavator Klaus Schmidt, is that they are early neolithic sanctuaries. Discovery[edit] The site was first noted in a survey conducted by Istanbul University and the University of Chicago in 1963. American archaeologist Peter Benedict identified it as being possibly neolithic[6] and postulated that the Neolithic layers were topped by Byzantine and Islamic cemeteries. The survey noted numerous flints. In 1994, Klaus Schmidt, now of the German Archaeological Institute, who had previously been working at Nevalı Çori, was looking for another site to lead a dig. The following year, he began excavating there in collaboration with the Şanlıurfa Museum. Dating[edit] View of site and excavation The imposing stratigraphy of Göbekli Tepe attests to many centuries of activity, beginning at least as early as the epipaleolithic, or Pre-Pottery Neolithic A (PPNA), in the 10th millennium BC. The complex[edit] Plateau[edit]

Bluestonehenge "Bluestonehenge" or "Bluehenge" is a prehistoric henge and stone circle monument that was discovered by the Stonehenge Riverside Project about 1 mile (1.6 km) south-east of Stonehenge in Wiltshire , England . All that currently remains of the site is the ditch of the henge and a series of stone settings, none of which is visible above ground. The site was excavated in August 2008 and again in August 2009 and is considered to be an important find by archaeologists . [ 1 ] Full details of the discovery were published in the 2010 January / February edition of British Archaeology . [ 2 ] Initial findings [ edit ] Bluestonehenge digital reconstruction - oval configuration.

Secrets of the Knights Templar: The Knights of John the Baptist Soon after the Knights Templar founded their order in the Holy Land in 1118 AD they assimilated into a very ancient gnostic tradition and lineage known as the Johannite Church, which had been founded by St. John the Baptist more than a thousand years previously. The ruling patriarch of this ancient tradition when the Templar Order first formed was Theoclete. The Johannites and St.

Travel - The mystery of England’s ancient tunnels “How do you like spiders?” asked James Gossip, an archaeologist, British prehistory expert and my guide to this subterranean world – one, apparently, that’s already inhabited. I looked at him, blanching slightly. He laughed. “Shall I just not point them out?” “Maybe not,” I said, peering into the dark tunnel before us. 3,500-Year-Old 'Lunch Box' with Traces of Grain Found in Swiss Alps About 3,500 years ago, an intrepid traveler in the Swiss Alps lost their lunch box. Archaeologists recently discovered the wooden vessel as the ice where it was buried melted near the top of a mountain. They even uncovered clues about the box's final contents; a chemical analysis revealed faint traces of cereals like wheat and rye, perhaps from a hearty whole- grain porridge. Baskets, barrels and boxes made from organic materials like wood or leather rarely survive in the archaeological record, but some examples have been found in the Alps before.

Coral Castle, Ed Leedskalnin, Anti-Gravity, Stargate Portals and more! "I have discovered the secrets of the pyramids, and have found out how the Egyptians and the ancient builders in Peru, Yucatan, and Asia, with only primitive tools, raised and set in place blocks of stone weighing many tons!" - Edward Leedskalnin Often equated with the engineering feats of Stonehenge and the Great Pyramid of Egypt, Coral Castle was built by reclusive eccentric Edward Leedskalnin, who single-handledly erected gigantic quarried stones resulting in his enigmatic castle. Originally located in the tiny town of Florida City in the l920's, the site was later moved to it's current location just south of Miami, Florida. Ed is said to have built the Castle for his "sweet 16" supposedly, a woman from his native Latvia who had promised to marry him and then changed her mind at the last minute. Sweet Sixteen is actually a sheilded allusion to his discovery--the ability to redirect the forces of gravity using earths' magnetics, utilizing uncanny knowledge of hyperdimensional physics.

Millau Viaduct The Millau Viaduct (French: le Viaduc de Millau, IPA: [vjadyk də mijo]) is a cable-stayed bridge that spans the valley of the River Tarn near Millau in southern France. History[edit] Problems with traffic on the route from Paris to Spain along the stretch passing through the Tarn valley near the town of Millau, during the summer when the roads became jammed with holiday traffic, required construction of a bridge to span the valley.[10] The first plans were discussed in 1987 by CETE, and by October 1991, the decision was made to build a high crossing of the Tarn River by a structure of around 2,500 m (8,200 ft). During 1993–1994 the government consulted with seven architects and eight structural engineers.

St John Masonry [[Category:Grand Lodges|England]] The United Grand Lodge of England (UGLE) is the governing body for the majority of freemasons within England and Wales with lodges in other, predominantly ex-British Empire and Commonwealth countries outside the United Kingdom. It claims to be the oldest Grand Lodge in the world, by descent from the first Grand Lodge formed in London in 1717. Together with the Grand Lodge of Ireland and the Grand Lodge of Scotland they are often referred to, by their members, as "the home Grand Lodges" or "the Home Constitutions". History[edit] Prior to 1717 there were Freemasons' lodges in England, Scotland, and Ireland, with the earliest known admission of non-operative masons being in Scotland.

Evidence of Sophisticated, Ancient, Unknown Cultures in North America....Page 38 Photo: Burnt Hill Site-Western Massachusetts, by Colgate Gilbert Mystery Hill, the Upton Cave, Calendar I and Calendar II, Gungywamp and Druid’s Hill are just several of the names given some incredibly important historical sites of which many have never heard a whisper. But their existence—and their importance—is becoming harder and harder to hide as more are discovered and interested folk become exposed to their grandeur. Sometime in the late 1600s or early 1700s, early American colonists began discovering and utilizing underground "root cellars" made of large, but manageable pieces of dressed stone as storage houses for food stuffs. Many also had carefully crafted openings in their roofs which allowed a small amount of light to pass through to the interiors.

How the Folsom Point Became an Archaeological Icon - The Crux This broken spear point found between two bison ribs ultimately changed not only the field of archaeology but also the narrative surrounding the arrival of Native Americans in North America. (Credit: DMNS/E-51) The Folsom spear point, which was excavated in 1927 near the small town of Folsom, New Mexico, is one of the most famous artifacts in North American archaeology, and for good reason: It was found in direct association with the bones of an extinct form of Ice Age bison. The Folsom point therefore demonstrated conclusively, and for the first time, that human beings were in North America during the last Ice Age—thousands of years earlier than previously thought. The Folsom discovery marked the end of a long series of sometimes serendipitous, sometimes deliberate actions by an intriguing cast of characters.

How and why was Stonehenge built? MOVING THE STONES click photo for enlargement The fact that Stonehenge was not built overnight does not in any way diminish the scale of the undertaking. But how could this have been achieved by a Neolithic society? Given the sheer size and weight of the stones, what ingenious devices were employed? And what of the stones? They are not typical of the local geology- indeed, the source of the bluestones, the first stones erected, has now been traced to the Preseli Mountains of south-west Wales.

John the Baptist, Patron Saint of Freemasonry Written by:Phillip G. "Phil" Elam, Grand Orator (1999-2000)Grand Lodge of Ancient, Free and Accepted Masons of the State of Missouri By history, custom, tradition and ritualistic requirements, the Craft holds in veneration the Festival Days of St. John the Baptist on June 24th, and St. John the Evangelist on December 27th. Mysterious Earthen Mounds Discovered in Ancient Cambodian Cities Using airborne laser-scanning equipment, archaeologists have discovered vast fields of dome-shaped earthen mounds, arranged into gridded patterns, in 1,000-year-old Cambodian cities. The scientists are puzzled as to what these vast "dome fields" (as archaeologists sometimes call them) would have been used for around 1,000 years ago, calling them "the most enigmatic features" from this archaeological landscape. In addition to the dome fields, archaeologists also found mounds shaped into geometric patterns, such as spirals.