X-rays reveal secrets of 14th-century tomb of England’s infamous Black Prince. Ancestors by Alice Roberts review – a story of movement and migration. In 2002, not far from Amesbury in southern Wiltshire and a mile or so from Stonehenge, archaeologists were investigating the site of a new school when they discovered something remarkable. 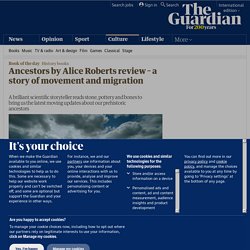 It was the grave of a man, aged between 35 and 45, who died more than 4,000 years ago. Wessex Archaeology conducted the excavation and they labelled his remains as “skeleton 1291”. But to the public he soon became known as the Amesbury Archer. Among his bones were no fewer than 18 beautifully crafted flint arrowheads. The shafts had long since rotted away, along with the bow. Indeed the grave itself contained nearly a hundred items – including copper knives, gold objects, boars’ tusks and a shale ring – making it the most richly furnished grave from the period that had ever been discovered in Britain.

The Amesbury Archer is preserved in Salisbury Museum and, according to Roberts, “our visits to museums, to gaze on such human remains, are a form of ancestor worship”. Underwater archaeology team finds ancient obsidian flakes 2,000 miles from quarry. (the “Website”), is operated by HERITAGEDAILY What are cookies? 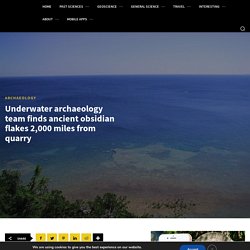 Cookies are small text files that are stored in the web browser that allows HERITAGEDAILY or a third party to recognise you. Cookies can be used to collect, store and share bits of information about your activities across websites, including on the HERITAGEDAILY website and subsidiary brand website. Cookies can be used for the following purposes: – To enable certain functions – To provide analytics – To store your preferences. 25,000-Year-Old Building Made of 60 Mammoths. A jaw-dropping example of Ice Age architecture has been unearthed on Russia’s forest steppe: a huge, circular structure built with the bones of at least 60 woolly mammoths. 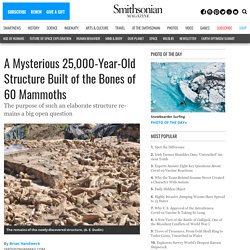 But exactly why hunter-gatherers enduring the frigid realities of life 25,000 years ago would construct the 40-foot diameter building is a fascinating question. “Clearly a lot of time and effort went into building this structure so it was obviously important to the people that made it for some reason,” says Alexander Pryor, an archaeologist at the University of Exeter (U.K.). He is the lead author of a new study published this week in the journal Antiquity describing the find at Kostenki, a place where many important Paleolithic sites lie clustered around the Don River. The ancient builders did leave some clues. Fires once burned within the structure and food scraps, including vegetables, remain. 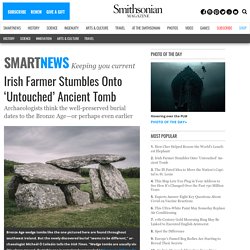 As Seán Mac an tSíthigh reports for Irish broadcaster RTÉ, the County Kerry resident stumbled onto the structure after turning over a rock and spotting a stone-lined passageway beneath it. When archaeologists from the National Monuments Service (NMS) and the National Museum of Ireland surveyed the chamber, they determined that it probably dates to between 2000 B.C. and 500 B.C. but could be even older. “Given its location, orientation and the existence of the large slab your initial thought is this is a Bronze Age tomb,” archaeologist Mícheál Ó Coileáin tells RTÉ. “But the design of this particular tomb is not like any of the other Bronze Age burial sites we have here.” The tomb consists of a large space with a smaller adjoining chamber, writes Ronan McGreevy for the Irish Times.

Monte Testaccio: A Literal Mountain of Ancient Roman Trash - Tales of Times Forgotten. A lot of people nowadays are talking about how plastic takes thousands of years to decompose and our landfills will therefore still be full of plastic thousands of years from now. 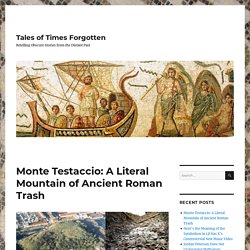 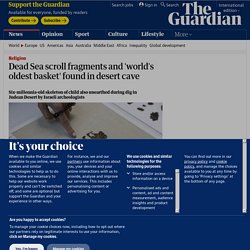 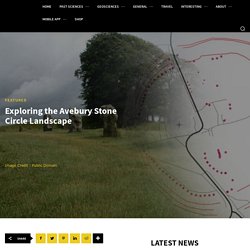 The area was designated part of the Stonehenge, Avebury and Associated Sites by UNESCO in 1986, in recognition for one of the most architecturally sophisticated stone circles in the world, in addition to the rich Neolithic, and Bronze age remains, such as the West Kennet Avenue, Beckhampton Avenue, West Kennet Long Barrow, the Sanctuary, and Windmill Hill. The Avebury Stone Circle Landscape – To View Full Map – Click Here Avebury Stone Circle. Archaeologists Reveal Roman Ceremonial Chariot. Archaeologists from the Archaeological Park of Pompeii, and the Public Prosecutor’s Office of Torre Annunziata have announced the discovery of an intact Roman Ceremonial Chariot excavated near the Roman city of Pompeii. 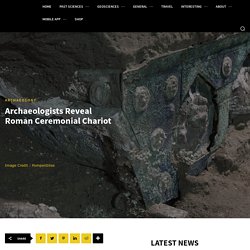 Pompeii, a UNESCO World Heritage Site, was a Roman city located in the modern commune of Pompei near Naples in the Campania region of Italy. At its peak, Pompeii had a population of around 20,000 inhabitants and became an important passage for goods that arrived by sea, to be sent toward Rome or southern Italy along the nearby Appian Way. Scientific Study of Believed Remains of Apostles. In Rome lies the Santi Apostoli church, cared for by Franciscan brothers for more than 500 years. 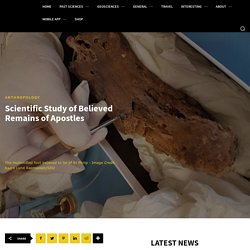 For more than 1500 years, this site has held the believed remains of two of the earliest Christians and Jesu apostles: St. Philip and St. The Vainakh Towers. Across the North Caucasus of Eastern Europe, are structures built in the characteristics of Vainakh tower architecture for defensive or domestic use, that were constructed by the Nakh peoples in Chechnya, the Republic of Ingushetia, and north-eastern Georgia. 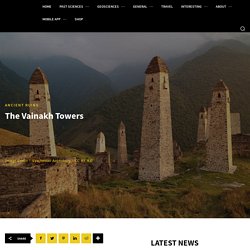 “Nakh” was coined in the Soviet period to accommodate the wider linguistic family of Vainakh languages, which were spoken by groups of ethnic Chechen, Ingush and Kist peoples. The oldest examples of Vainakh tower architecture dates from the 1st century AD, with the most active period of tower construction dating from the 15th–17th century AD. Domestic towers were usually built on a square or rectangular base, with tapering walls that rose up to four floors in height.

The upper stories were generally used for habitation, whilst the lower levels were intended for livestock and grain storage. Towers were traditionally built in a period lasting no more than 365 days, with every well-to-do family in a community obliged to construct one. Two stones fuel debate over when America’s first settlers arrived. Scientific debate about the most controversial archaeological site in the Americas has entered rocky new territory. In 2017, scientists reported that around 130,000 years ago, an unidentified Homo species used stone tools to break apart a mastodon’s bones near what is now San Diego. If true, that would mean that humans or one of our close evolutionary relatives reached the Americas at least 100,000 years earlier than previously thought, dramatically reshaping scientists’ understanding of when the region was settled (SN: 4/26/17). Critics have questioned whether the unearthed stones were actually used as tools. And other researchers suggested that supposed tool marks on the bones could have been created as the bones were carried by fast-moving streams or caused by construction activity that partially exposed the California site before its excavation in 1992 and 1993.

Sign Up For the Latest from Science News Headlines and summaries of the latest Science News articles, delivered to your inbox. Spectacular Ice Age Rock Paintings Found In Colombian Rainforest. Save Get the latest Waking Times articles delivered to your inbox. Sign up here. Deutsche Welle, EcoWatch Waking Times. World's oldest known cave painting found in Indonesia. Archaeologists have discovered the world's oldest known cave painting: a life-sized picture of a wild pig that was made at least 45,500 years ago in Indonesia.

The finding described in the journal Science Advances on Wednesday provides the earliest evidence of human settlement of the region. Co-author Maxime Aubert of Australia's Griffith University told AFP it was found on the island of Sulawesi in 2017 by doctoral student Basran Burhan, as part of surveys the team was carrying out with Indonesian authorities. The Leang Tedongnge cave is located in a remote valley enclosed by sheer limestone cliffs, about an hour's walk from the nearest road. Vallum Aulium - Hadrian’s Wall. Hadrian’s Wall (Vallum Aulium) was a defensive fortification in Roman Britannia that ran 73 miles (116km) from Mais at the Solway Firth on the Irish Sea to the banks of the River Tyne at Segedunum at Wallsend in the North Sea. The purpose of the walls construction varies, some theories by archaeologists suggest that it was an expression of Rome’s power to solidify Hadrian’s policy of defence.

On Hadrian’s accession to the throne in AD 117, there was unrest in parts of the Empire, including Judea, Libya, Egypt, and Mauretania which may have persuaded Hadrian to strengthen frontier borders. Whether this would have deterred a threat from the northern tribes invading from Caledonia is unknown, parts of Caledonia had previously been annexed with the construction of the Gask Ridge around AD 70-80 and in AD 84, an army of 30,000 Caledonian warriors faced off against a 20,000 strong Roman invasion force led by General Gnaeus Julius Agricola at the Battle of Mons Graupius.

Mais – Hadrian’s Wall. Have Archaeologists Found History's Deadliest Dance Floor? Roman toilets may actually have been bad for public health. At its zenith, the Roman Empire spanned three continents, encircled the Mediterranean, and was home to one-fifth of the planet’s population. The Romans brought roads, bridges, and, perhaps most importantly, sanitation. Did Our Early Ancestors Boil Their Food in Hot Springs? 'Astonishing' giant circle of pits found at Stonehenge. • A 1.2 mile (2km) wide circle of large shafts was found, measuring over 10 meters wide and 5 meters deep. Archaeologists Discover Giant Defensive Minefield From Roman Iron Age. An Archaeological Explanation for the Story of Noah's Ark. The Biblical story of Noah's Ark is widely known: God decides to wipe the Earth clean of wickedness and tasks the righteous Noah and his family to safeguard themselves along with all the world's animals inside a gigantic wooden ark in order to ride out a global 150-day flood.

Though some take the story literally, there's no archaeological evidence that such an ark ever existed, nor is there any geologic evidence of a cataclysmic global flood. Itsy-Bitsy Indonesian Rocks Are Rewriting the History of Ancient Art. 10 Historic UK Stone Circles. This gnarled pile of fossils was once a giant structure—made of Ice Age mammoths. Some 25,000 years ago, a circular wall of bone and ivory rose like a macabre mirage from a snowbound plain 500 kilometers south of present-day Moscow.

Earth - Severe droughts explain the mysterious fall of the Maya. Lasers reveal ‘lost’ Roman roads. Piecing together the gruesome story of York’s headless Romans. An Ancient, Brutal Massacre May Be the Earliest Evidence of War. Butchered Mammoth Suggests Humans Lived in Siberia 45,000 Years Ago. Stone-age tools dating back 118,000 years discovered — but no sign of people who made them. Iceman’s Gut Holds Clues to Humans’ Spread into Europe. Stone Age Horror! Pit Filled with Severed Limbs Uncovered.