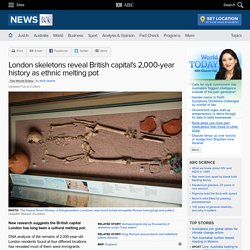 DNA analysis of the remains of 2,000-year-old London residents found at four different locations has revealed most of them were immigrants. At a secure storage site deep in the heart of London, the remains of 20,000 people sit on shelves in non-descript cardboard boxes, where they have lain undisturbed for decades. The Museum of London's archaeological archive contains a treasure trove of remains, uncovered at thousands of archaeological sites found across the city. The museum has just conducted DNA analysis on four of London's earliest inhabitants. They date back almost 2,000 years to a time when Jesus Christ was living on the other side of the Roman Empire in then-Judea. London itself was known then as Londinium and was in the process of being established by Roman invaders who arrived in 43AD. Media player: "Space" to play, "M" to mute, "left" and "right" to seek. Scans suggest '90pc' chance of hidden chamber in King Tutankhamun's tomb, experts say.

Updated Chances are high that the tomb of ancient Egypt's boy-king Tutankhamun has passages to a hidden chamber, which may be the last resting place of Queen Nefertiti, experts say. 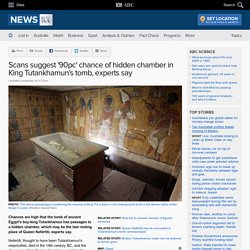 Nefertiti, thought to have been Tutankhamun's stepmother, died in the 14th century BC, and the discovery of her final resting place would be the most remarkable Egyptian archaeological find this century. British Egyptologist Nicholas Reeves announced plans for further investigations at a news conference with Egyptian antiquities minister Mamdouh al-Damaty, who said data would be taken to Japan for study and that chances were high that a chamber existed.

"We said earlier there was a 60 per cent chance there is something behind the walls. But now after the initial reading of the scans, we are saying now it's 90 per cent likely there is something behind the walls," Mr al-Damaty said. Fossils indicate dinosaurs evolved rapidly after first relatives appeared - Science. Posted December 08, 2015 07:07:24 The first dinosaur relatives may have emerged up to 10 million years later than previously thought then evolved rapidly into the animals that would take over the world, a new study suggests. 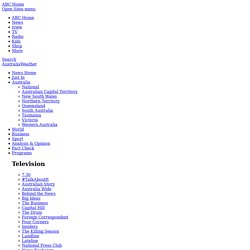 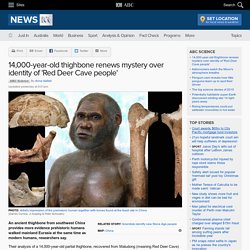 Their analysis of a 14,000-year-old partial thighbone, recovered from Maludong (meaning Red Deer Cave) in Yunnan Province in 1989, is reported today in the journal PLOS ONE. It follows a 2012 analysis by the team of skull bones from Maludong and another site in China, that led to their first suggestion of the existence of the Red Deer Cave people. We don't pretend for a moment that our ideas aren't pushing the envelope Associate Professor Curnoe The exact identity of these people remains a mystery, and at least one expert is not even convinced the thighbone is human at all. Despite the young age of the bone, the researchers argue their analysis of 15 of its traits suggests it comes from a human with "primitive anatomy". "This is a thighbone that is very different to modern humans," Dr Curnoe said. The oldest-known fossil of a land-dwelling organism is a fungus - Science. Updated The beautifully preserved filaments from a fungus that lived 440 million years ago are the oldest-known fossils of a land-dwelling organism yet found, according to a new study. 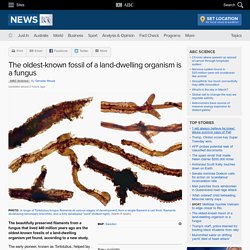 Key points Analysis of tiny fossils indicates they are root-like filaments of fungus.Fungus appeared around 440 million years ago, just before moss-like plants.Likely that other organisms appeared on land earlier but fossil evidence is hard to find. The early pioneer, known as Tortotubus, helped lay the foundation for more complex organisms to take root and thrive on land, said palaeontologist Dr Martin Smith of Durham University in the United Kingdom. "It's hard to imagine the surface of the Earth before any vegetation — picture barren rocks, with any dust being quickly blown into rivers and the sea," said Dr Smith. "The tiny threads of Tortotubus would have helped to consolidate and hold together early soils, allowing deeper soils to form. 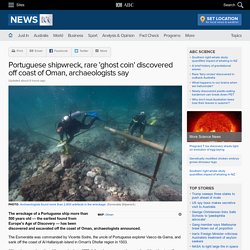 The Esmeralda was commanded by Vicente Sodre, the uncle of Portuguese explorer Vasco da Gama, and sank off the coast of Al Hallaniyah island in Oman's Dhofar region in 1503. Although researchers found the wreck site in 1998, full-scale surveys and excavation did not begin until 2013. Human sacrifice may have helped build and sustain social class systems - Science News. Posted Elaborate ritual killings such as being crushed under a newly built canoe and decapitation after being rolled off a house laid the foundations of class-based structures in modern societies, a new study of Austronesian cultures suggests. 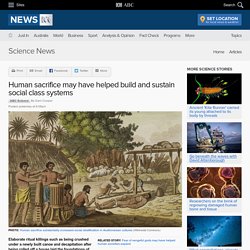 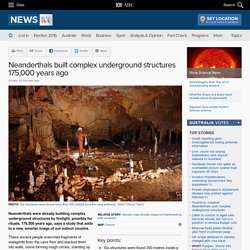 Key points: Six structures were found 300 metres inside a cave in south-west FranceThe finding suggests Neanderthals knew how to work as a groupRecent research has shown Neanderthals cared for their elderly, buried their dead, and may have made jewellery These ancient people wrenched fragments of stalagmite from the cave floor and stacked them into walls, some forming rough circles, standing up to knee high, according to research published in the journal Nature. Deep inside Bruniquel Cave in south-west France, more than 300 metres from the entrance, they built six such structures, one almost seven metres wide, tens of thousands of years before the first Homo sapiens arrived in Europe.

"They were not mere brutes focused on chipping away at flint tools or killing bison for food. " Bog butter unearthed at Irish property estimated to be 2,000 years old. Updated What weighs 10 kilograms, smells like cheese, is up to 2,000 years old and "still edible"? 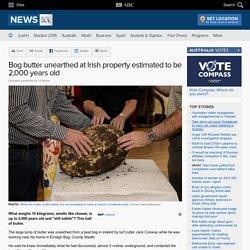 This ball of butter. The large lump of butter was unearthed from a peat bog in Ireland by turf cutter Jack Conway while he was working near his home in Emlagh Bog, County Meath. He said he knew immediately what he had discovered, almost 5 metres underground, and contacted the local Cavan Country Museum. Curator Savina Donohoe told Fox News while the discovery was not unusual, this find was particularly important because the bog butter was not buried in a wooden container or keg as was the norm in ancient times. "It may have been an offering to the gods," she said. The bog butter, which was said to have "smelt like cheese", has been given to the National Museum for preservation.