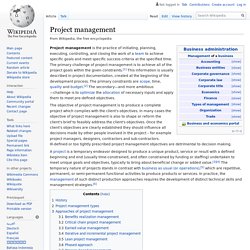 In many cases the objective of project management is also to shape or reform the client's brief to feasibly address the client's objectives. Once the client's objectives are clearly established they should influence all decisions made by other people involved in the project – for example project managers, designers, contractors and sub-contractors. Ill-defined or too tightly prescribed project management objectives are detrimental to decision making. History[edit] Henry Gantt (1861–1919), the father of planning and control techniques PERT and CPM are very similar in their approach but still present some differences. A Brief History of Project Management. By Duncan Haughey, PMP | 2 Jan 2010 | updated 21 Apr 2013 In this history of project management, I chart all the major developments and events in the discipline as far back as there are records. 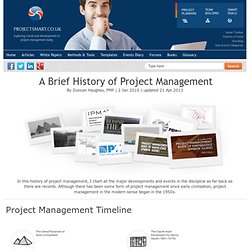 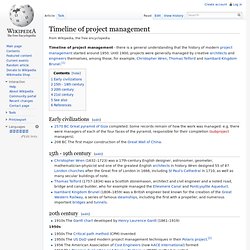 Until 1900, projects were generally managed by creative architects and engineers themselves, among those, for example, Christopher Wren, Thomas Telford and Isambard Kingdom Brunel.[1] Early civilizations[edit] 2570 BC Great pyramid of Giza completed. Göbekli Tepe. By Charles C. 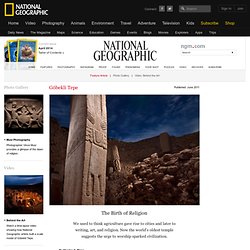 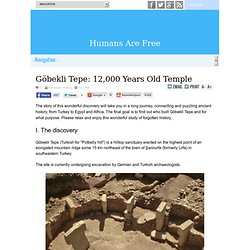 II. Dating the temple Circles of limestone columns weighing from 7 to 15 tons or more have been excavated in Göbekli Tepe, Turkey, about 6 miles northeast of Urfa. After dating the temple to be 12,000 years old, the official story is presenting this discovery to be almost twice as old as the Egyptian pyramids. Gobekli_Tepe.jpg (400×299) Goebekli.GIF (1000×1000) Gobekli-tepe-orion-star-map.jpg (685×378) The Ur and Harran Latitudes, and Göbekli Tepe. NEWS: "... latitude at Harran equals 3/4 atan and at Ur 3/5 atan ... 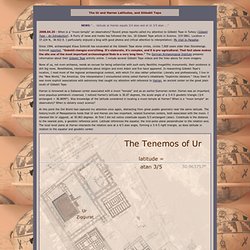 " 2008.04.25 - When is a "moon temple" an observatory? Recent press reports called my attention to Göbekli Tepe in Turkey (Göbekli Tepe - An Introduction). A flurry of news and media has followed the Jan. 18 Göbekli Tepe article in Science, 319:5861. Location = 37.224 N., 38.922 E. I particularly enjoyed a blog with good photos and critical attention to interpretation: My Visit to Paradise.

Since 1994, archaeologist Klaus Schmidt has excavated at the Göbekli Tepe stone circles, circles 7,000 years older than Stonehenge. None of us, not even archaeos, needs an excuse for being unfamiliar with such early Neolithic megalithic monuments; their existence is still big news. Harran is renowned as a Sabaean center associated with a moon "temple" and as an earlier Sumerian center. At this point the Old World had captured my attention once again, distracting from great pueblo geometry near the same latitude. 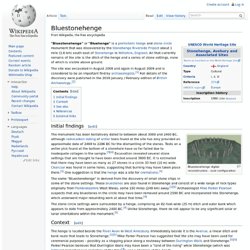 All that currently remains of the site is the ditch of the henge and a series of stone settings, none of which is visible above ground. The site was excavated in August 2008 and again in August 2009 and is considered to be an important find by archaeologists . [ 1 ] Full details of the discovery were published in the 2010 January / February edition of British Archaeology . [ 2 ] Initial findings [ edit ] Millau Viaduct. The Millau Viaduct (French: le Viaduc de Millau, IPA: [vjadyk də mijo]) is a cable-stayed bridge that spans the valley of the River Tarn near Millau in southern France. History[edit] Problems with traffic on the route from Paris to Spain along the stretch passing through the Tarn valley near the town of Millau, during the summer when the roads became jammed with holiday traffic, required construction of a bridge to span the valley.[10] The first plans were discussed in 1987 by CETE, and by October 1991, the decision was made to build a high crossing of the Tarn River by a structure of around 2,500 m (8,200 ft).

During 1993–1994 the government consulted with seven architects and eight structural engineers. During 1995–1996, a second definition study was made by five associated architect groups and structural engineers. In January 1995, the government issued a declaration of public interest to solicit design approaches for a competition.[11] Possible routes[edit] Contractors[edit] Newgrange. Newgrange (Irish: Sí an Bhrú)[1] is a prehistoric monument in County Meath, Ireland, about one kilometre north of the River Boyne.[2] It was built about 3200 BC,[3][4] during the Neolithic period, which makes it older than Stonehenge and the Egyptian pyramids.[5] Newgrange is a large circular mound with a stone passageway and chambers inside. 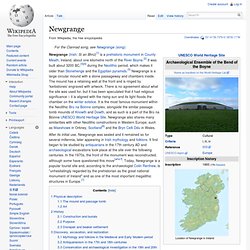 The mound has a retaining wall at the front and is ringed by 'kerbstones' engraved with artwork. There is no agreement about what the site was used for, but it has been speculated that it had religious significance – it is aligned with the rising sun and its light floods the chamber on the winter solstice. It is the most famous monument within the Neolithic Brú na Bóinne complex, alongside the similar passage tomb mounds of Knowth and Dowth, and as such is a part of the Brú na Bóinne UNESCO World Heritage Site. After its initial use, Newgrange was sealed and it remained so for several millennia, later appearing in Irish mythology and folklore.

New-grange.jpg (700×499) Newgrange - Ireland. Newgrange Neolithic (Stone Age) Megalithic Monument. 101 Facts About Newgrange - Construction of Newgrange. 21 Newgrange mound should be properly referred to as a cairn, because it consists of water-rolled pebbles, each of which is between 6 to 9 inches across. 22 The entire mound contains an estimated 200,000 tonnes of material, and it has been estimated construction would have taken about 30 years using a workforce of about 300. 23 It is not known with any certainty how the larger stones which form the kerb and passage and chamber of Newgrange were brought to the site. 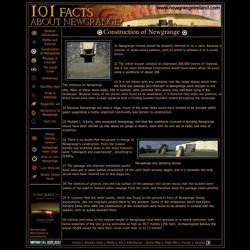 Many of these stone slabs, 550 in number, were collected from where they had been lying in the landscape. Because many of the stones were found to be weathered, it is believed they were not quarried, so there would have been a huge logistical task in finding suitable boulders dotted throughout the landscape. 24 Because Newgrange sits atop a ridge, many of the large slabs would have needed to be brought uphill, again suggesting a highly organised community was behind its construction. 25 Michael J.