Archaeology In The Holy Land 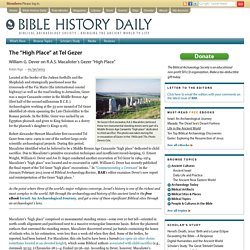 Macalister, believed these ten monumental standing stones were part of a Middle Bronze Age Canaanite “high place” dedicated to child sacrifice. Canaanite Cult Complex Discovered at Tel Burna. A 3,300-year-old cult complex where Baal may have been worshipped has been excavated at Tel Burna in Israel. 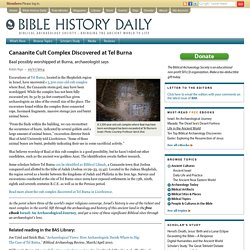 Photo: Courtesy Professor Itzick Shai. Excavations at Tel Burna, located in the Shephelah region in Israel, have uncovered a 3,300-year-old cult complex where Baal, the Canaanite storm god, may have been worshipped. While the complex has not been fully excavated yet, its 52 by 52-feet courtyard has given archaeologists an idea of the overall size of the place. The excavators found within the complex three connected cups, facemask fragments, massive storage jars and burnt animal bones. “From the finds within the building, we can reconstruct the occurrence of feasts, indicated by several goblets and a large amount of animal bones,” excavation director Itzick Shai of Ariel University told LiveScience.

Shai believes worship of Baal at this cult complex is a good possibility, but he hasn’t ruled out other candidates, such as the ancient war goddess Anat. Skilled Craftsmen, Not Slaves, Smelted Copper at Timna. Animals bones discovered at copper production sites in the Timna Valley offer researchers clues to the identity of the copper smelters. 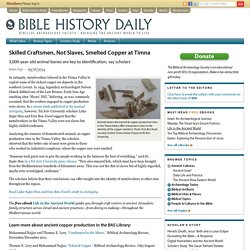 Photo: Erez Ben-Yosef, courtesy Central Timna Valley Project at Tel Aviv University. In antiquity, metalworkers labored in the Timna Valley to exploit some of the richest copper ore deposits in the southern Levant. In 1934, legendary archaeologist Nelson Glueck dubbed one of the Late Bronze–Early Iron Age smelting sites “Slaves’ Hill,” believing, as was commonly assumed, that the workers engaged in copper production were slaves. In a recent study published in the journal Antiquity, however, Tel Aviv University scholars Lidar Sapir-Hen and Erez Ben-Yosef suggest that the metalworkers in the Timna Valley were not slaves but highly skilled craftsmen. How Ancient Jews Dated Years. This Bible History Daily feature was originally published in September 2013. 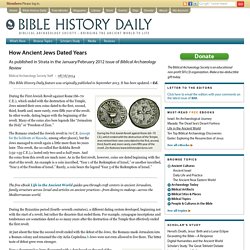 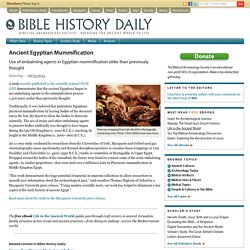 Photo: © Ron Oldfield and Jana Jones. A study recently published in the scientific journal PLOS ONE demonstrates that the ancient Egyptians began to use embalming agents in the mummification process 1,500 years earlier than previously thought. Traditionally, it was believed that prehistoric Egyptians practiced mummification by leaving bodies of the deceased out in the hot, dry desert to allow the bodies to desiccate naturally. The use of resins and other embalming agents to preserve bodies artificially was thought to have begun during the late Old Kingdom (c. 2200 B.C.E.), reaching its height in the Middle Kingdom (c. 2000–1600 B.C.E.). 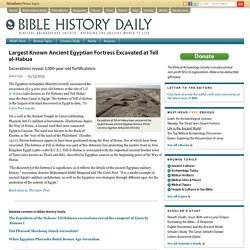 Photo: Courtesy Egyptian Antiquities Ministry. The Egyptian Antiquities Ministry recently announced the excavation of a 3,000-year-old fortress at the site of Tell el-Habua (also known as Tel Habuwa and Tell Huba) near the Suez Canal in Egypt. The fortress at Tell el-Habua is the largest of its kind discovered in Egypt to date, The Cairo Post reports. On a wall at the Karnak Temple in Luxor celebrating Pharaoh Seti I’s military achievements, illustrations depict the Way of Horus, a coastal road that once connected Egypt to Canaan.

First Person: Life Was Not So Bad for Smelters. Mohammad Najjar and Thomas Levy have been excavating at an ancient copper mining and smelting site in the Faynan district of Jordan for more than 20 years. 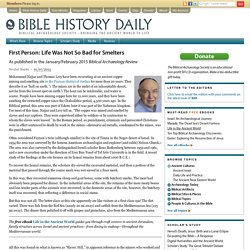 They describe it as “hell on earth.”a The mines are in the midst of an inhospitable desert, not far from the lowest spot on earth.b The heat can be intolerable, and water is scarce. People have been mining copper here for 12,000 years, and they have been smelting the extracted copper since the Chalcolithic period, 4,500 years ago. In the Biblical period, this area was part of Edom; later it was part of the Nabatean kingdom. For most of this time, Najjar and Levy tell us, “The copper was mined and smelted by slaves and war captives.

They were supervised either by soldiers or by contractors to whom the slaves were leased.” Bethsaida Excavations Reveal Possible Royal Escape Tunnel. Aerial view of the Iron Age palace at Bethsaida. 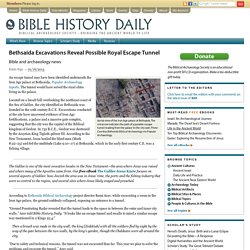 The red arrow indicates the path of a possible escape tunnel leading from the palace to the city wall. Photo: Courtesy Bethsaida Biblical Archaeology via Popular Archaeology. An escape tunnel may have been identified underneath the Iron Age palace at Bethsaida, Popular Archaeology reports. Roman-Era Structure Believed to Be Synagogue Exposed in Israel. Robin Ngo • 12/29/2014 Archaeologists have excavated what may be the remains of a Roman-era synagogue in Golan Heights in Israel. 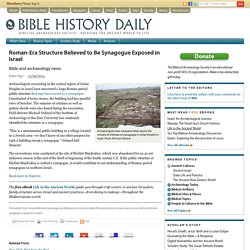 Photo: Michael Osband. Archaeologists excavating in the central region of Golan Heights in Israel have uncovered a large Roman-period public structure that may have served as a synagogue. Why Study Prehistoric Israel? Field photo and reconstruction of an adult and adolescent skeleton discovered in situ during excavations in the Natufian layer at Raqefet Cave, Mt. 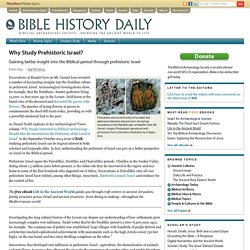 Carmel. Images: Photograph reproduced with permission from E. Zeugma Excavations Reveal New Mosaics. Nick Furar • 11/10/2014 Excavations in the ancient city of Zeugma have revealed new mosaics. Image: AA Photos. Doctors, Diseases and Deities: Epidemic Crises and Medicine in Ancient Rome. Biblical Archaeology Society Staff • 12/26/2014 There’s no question that today’s modern culture is very different from that of ancient Rome, but certain human realities remain consistent across time. The challenges of illness and injury were as prevalent in the Roman Empire as they are in today’s society, and the concern with medicine and health is something modern people have in common with ancient Romans.

BAS Director of Educational Programs Sarah Yeomans’s doctoral research is concerned with Roman medical technology, medical cult and the impact of plague on Roman society. Recently, she gave a lecture on these subjects at the prestigious Explorers Club in New York City. How December 25 Became Christmas. A blanket of snow covers the little town of Bethlehem, in Pieter Bruegel’s oil painting from 1566. Although Jesus’ birth is celebrated every year on December 25, Luke and the other gospel writers offer no hint about the specific time of year he was born. Scala/Art Resource, NY On December 25, Christians around the world will gather to celebrate Jesus’ birth. Biblical Pharisees and Jewish Halakhah: Good Guys with Bad Press, Says Scholar Roland Deines.

Biblical Archaeology Society Staff • 08/15/2014 This article was originally published in August 2013. It has been updated. —Ed. Were the Biblical Pharisees really as bad as the New Testament makes them seem? Professor Roland Deines thinks not. Tarshish: Hacksilber Hoards Pinpoint Solomon’s Silver Source. This article was originally published in December 2013. It has been updated. —Ed. “Once every three years the fleet of ships of Tarshish used to come bringing gold, silver, ivory, apes, and peacocks … the king [Solomon] made silver as common in Jerusalem as stones.” – 1 Kings 10:22-27“Tarshish did business with you out of the abundance of your great wealth; silver, iron, tin, and lead they exchanged for your wares.” – Ezekial 27:12 (Lamentation over Tyre) A hacksilber hoard from Tel Dor.

Examining the Lives of Ancient Egyptian Women. Tjat, an ancient Egyptian woman, attends Khnumhotep and his family. The Enduring Symbolism of Doves. This Bible History Daily article was originally published on October 1, 2013. Oldest Metal Object from the Southern Levant Discovered. Phoenician Shipwreck Located off Coast of Malta. A 2,700-year-old Phoenician shipwreck off the Maltese island of Gozo has been discovered. Photo: © Groplan project/Timmy Gambin, University of Malta. Medicine in the Ancient World. Viewing Petroglyphs as More than Scribbles – Biblical Archaeology Society. Ancient Aramaic Business Records. Borrowing from the Neighbors. To See or Not to See. The Fourth-Century Earthquake that Rocked Galilee.

First Person: Human Sacrifice to an Ammonite God? Ancient Israel Through a Social Scientific Lens. What Did Gladiators Eat? Asherah and the Asherim: Goddess or Cult Symbol? The “Philistines” to the North. Everyday Eves. High Places, Altars and the Bamah. Meet the House of David at the Met. The Decline of the Neo-Assyrian Empire. Childhood in Roman Egypt. The Archaeological Quest for the Earliest Christians. Neolithic Water Well Excavated Off Levantine Coast. The Oracle of Delphi—Was She Really Stoned? Were There Arameans at Abel Beth Maacah? Manot Cave Skull Links Modern Humans to Neanderthals. Ancient Wine of Gaza: 1,500-Year-Old Grape Seeds Found in the Negev. No, No, Bad Dog: Dogs in the Bible.