Evolution of Life on Earth 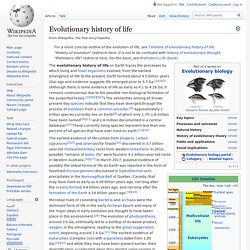 Earth formed about 4.5 billion years (Ga) ago and evidence suggests life emerged prior to 3.7 Ga.[1][2][3] (Although there is some evidence of life as early as 4.1 to 4.28 Ga, it remains controversial due to the possible non-biological formation of the purported fossils.[1][4][5][6][7]) The similarities among all known present-day species indicate that they have diverged through the process of evolution from a common ancestor.[8] Approximately 1 trillion species currently live on Earth[9] of which only 1.75–1.8 million have been named[10][11] and 1.6 million documented in a central database.[12] These currently living species represent less than one percent of all species that have ever lived on earth.[13][14]

Archean Eon: 3.85 to 2.5 billion years ago. Proterozoic Eon: 2.5 billion years ago to 542 mya. Phanerozoic Eon: 542 - 0 mya. Timeline of evolutionary history of life. Timeline of natural history. History of the Earth. Geological history of Earth. Geologic time represented in a diagram called a geological clock, showing the relative lengths of the eons of Earth's history and noting major events The geological history of Earth follows the major events in Earth's past based on the geologic time scale, a system of chronological measurement based on the study of the planet's rock layers (stratigraphy). 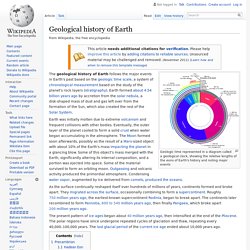 Earth formed about 4.54 billion years ago by accretion from the solar nebula, a disk-shaped mass of dust and gas left over from the formation of the Sun, which also created the rest of the Solar System. As the surface continually reshaped itself over hundreds of millions of years, continents formed and broke apart. They migrated across the surface, occasionally combining to form a supercontinent. Roughly 750 million years ago, the earliest-known supercontinent Rodinia, began to break apart. Geologic time scale. The geologic time scale (GTS) is a system of chronological measurement that relates stratigraphy to time, and is used by geologists, paleontologists, and other earth scientists to describe the timing and relationships between events that have occurred throughout Earth's history. 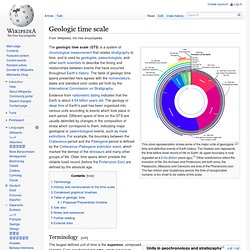 The table of geologic time spans presented here agrees with the nomenclature, dates and standard color codes set forth by the International Commission on Stratigraphy. Evidence from radiometric dating indicates that the Earth is about 4.54 billion years old. The geology or deep time of Earth's past has been organized into various units according to events which took place in each period. Different spans of time on the GTS are usually delimited by changes in the composition of strata which correspond to them, indicating major geological or paleontological events, such as mass extinctions. Terminology[edit] International Chronostratigraphic Chart. Permian Time Scale. Ordovician Chronostratigraphic Chart. Profiles of over 300 known dinosaurs! Evolutionary history of plants. A late Siluriansporangium. 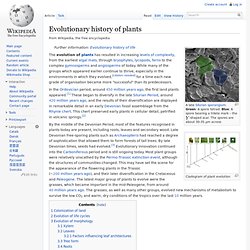 Green: A spore tetrad. Blue: A spore bearing a trilete mark – the -shaped scar. The spores are about 30-35 μm across Cladogram of plant evolution The evolution of plants has resulted in increasing levels of complexity, from the earliest algal mats, through bryophytes, lycopods, ferns to the complex gymnosperms and angiosperms of today. In the Ordovician period, around 450 million years ago, the first land plants appeared.[1] These began to diversify in the late Silurian Period, around 420 million years ago, and the results of their diversification are displayed in remarkable detail in an early Devonian fossil assemblage from the Rhynie chert.

By the middle of the Devonian Period, most of the features recognised in plants today are present, including roots, leaves and secondary wood. Colonization of land[edit] Plants were not the first photosynthesisers on land; weathering rates suggest that organisms[which?] Charcoalification is an important taphonomic mode. Timeline of plant evolution. This article attempts to place key plant innovations in a geological context. 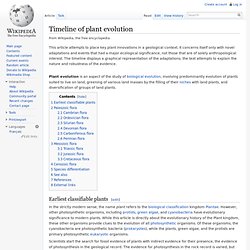 It concerns itself only with novel adaptations and events that had a major ecological significance, not those that are of solely anthropological interest.