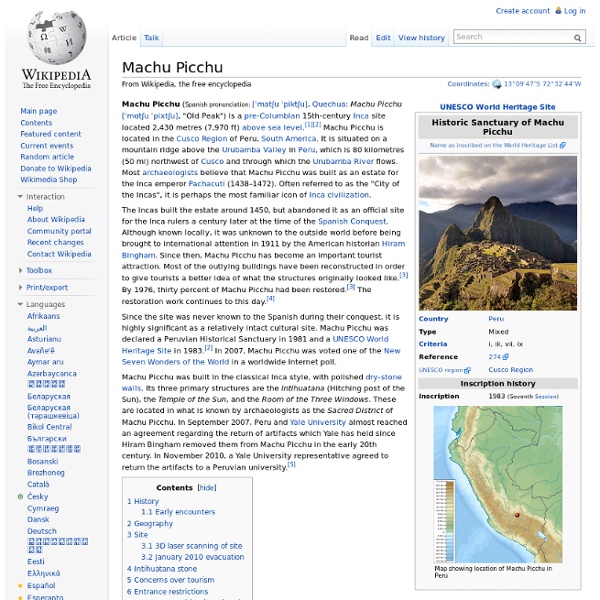 Machu Picchu (in hispanicized spelling, Spanish pronunciation: [ˈmatʃu ˈpiktʃu]) or Machu Pikchu (Quechua machu old, old person, pikchu peak; mountain or prominence with a broad base which ends in sharp peaks,[1] "old peak", pronunciation [ˈmɑtʃu ˈpixtʃu]) is a 15th-century Inca site located 2,430 metres (7,970 ft) above sea level.[2][3] It is located in the Cusco Region, Urubamba Province, Machupicchu District in Peru.[4] It is situated on a mountain ridge above the Sacred Valley which is 80 kilometres (50 mi) northwest of Cusco and through which the Urubamba River flows. Most archaeologists believe that Machu Picchu was built as an estate for the Inca emperor Pachacuti (1438–1472). Often mistakenly referred to as the "Lost City of the Incas", it is perhaps the most familiar icon of Inca civilization. The Incas built the estate around 1450, but abandoned it a century later at the time of the Spanish Conquest. Machu Picchu is vulnerable to threats. History Early encounters Geography

US drone to map ancient Peru ruins Washington - Archaeologists in Peru plan to use a US-made drone to survey ancient Andean ruins, in the latest civilian application of the unmanned aerial vehicles used to hunt militants in the world's war zones. The device, which can fit in a backpack, is due to be tested later this month at the ruins of the 16th-century Spanish colonial town Mawchu Llacta, some 4 100m above sea level. The Skate Small Unmanned Aerial System will take only about 10 minutes to map the massive site the size of 25 football fields, saving the researchers months of time-consuming cataloguing, they said. "Mawchu Llacta, with its exceptionally well-preserved layout and architecture, provides an ideal case study," said anthropologist Steven Wernke and engineering professor Julie Adams of Vanderbilt University in an e-mail. "But the scale and complexity of it necessitated a novel approach to mapping. "This project is part of that process, as it will develop free, open source code for flight and imagery capture."

Kyoto Kyoto (京都市, Kyōto-shi?) (Japanese pronunciation: [kʲoːꜜto] ( )) historically known as Meaco is a city located in the central part of the island of Honshu, Japan. It has a population close to 1.5 million. Formerly the imperial capital of Japan for more than one thousand years, it is now the capital city of Kyoto Prefecture located in the Kansai region, as well as a major part of the Kyoto-Osaka-Kobe metropolitan area. Name[edit] 18th century map with the Japanese capital "Meaco" In Japanese, the city has been called Kyō (京), Miyako (都), or Kyō no Miyako (京の都). An obsolete spelling for the city's name is Kioto; it was formerly known to the West as Meaco (/miːækoʊ/; Japanese: 都; miyako, meaning "the seat of Imperial palace" or "capital".) History[edit] Daidairi and a panoramic view of Heian-kyō (restoration model) Origins[edit] Heian-kyō[edit] The city suffered extensive destruction in the Ōnin War of 1467-1477, and did not really recover until the mid-16th century. Geography[edit] Climate[edit]

Moray (Inca ruin) Moray or Muray (Quechua)[1] is an archaeological site in Peru approximately 50 km (31 mi) northwest of Cuzco on a high plateau at about 3500 m (11,500 ft) and just west of the village of Maras. The site contains unusual Inca ruins, mostly consisting of several enormous terraced circular depressions, the largest of which is about 30 m (98 ft) deep. The purpose of these depressions is uncertain, but their depth and orientation with respect to wind and sun creates a temperature difference of as much as 15 °C (27 °F) between the top and bottom. During the rainy season of 2009/10, the region of Cusco received higher levels of precipitation than normal, which caused permanent damage to the ruins of Moray. According to travel writer Paul Jones,[2] "Although repair work at Moray continues to restore the site to its original state, lack of funds and continuing annual rainfall hinder progress. Vertical archipelago Coordinates:

Nara, Nara Nara (奈良市, Nara-shi?) is the capital city of Nara Prefecture located in the Kansai region of Japan. The city occupies the northern part of Nara Prefecture, directly bordering Kyoto Prefecture. Eight temples, shrines and ruins in Nara, specifically Tōdai-ji, Saidai-ji, Kōfuku-ji, Kasuga Shrine, Gangō-ji, Yakushi-ji, Tōshōdai-ji, and the Heijō Palace remain, together with Kasugayama Primeval Forest, collectively form "Historic Monuments of Ancient Nara", a UNESCO World Heritage Site. Etymology[edit] There used to be a variety of transcription for Nara by Heian period. Various theories have been suggested over the origin of the name Nara, and here are five relatively famous ones. There is the idea in the Nihon shoki that Nara was derived from narasu (to flatten). History[edit] Nara was the capital of Japan from 710 to 784, lending its name to the Nara period. In 2010, Nara celebrated the 1,300th anniversary of its ascension as Japan's imperial capital.[11] Modern Nara[edit] Geography[edit]

Travel views: September 22 to 28, 2012 Emailed by Carole and Alex Grenfell, who win two flights to Belfast from London Southend More feedback from our readers Making the most of Machu Picchu Your writer is correct to say you need to spend a night in Aguas Calientes in order to climb Huayna Picchu, but don’t be put off by his daunting description of the climb. As long as you are there before 10am you will have a good chance of being one of the first 400 allowed admission; the steel cables he mentions are hand rails to help you up the steps, some of which are very high. If you want to do the climb, take it slowly and you will have no problem. It is 40 years since my wife and I visited Machu Picchu. Do not underestimate the effects of altitude sickness. When I visited Machu Picchu I had an old pull-out supplement from National Geographic showing on one side the ruins as they are and on the other the city as it might have been when still inhabited. Tastes of Amsterdam Costly UK hotels Safe in Hong Kong How to enter From easyJet

Wild Things Night is my favorite time in the Amazon because that's when things get really loud. Some of the players in this orchestra can be identified: castanet frogs, for example, clickety-clacking rhythmically. Or the monkey frog, which makes an unpretty bonk, like an ambulance coming up on traffic. Occasionally, something crashes down through the brush, sounding awfully large—a big bat?A turkey vulture?An ocelot? But the very coolest noise, as far as I'm concerned, is the call of the red howler monkey. My son, Asa, 11, and I were deciphering the cacophony from a lodge room on our first night in the Peruvian jungle when a striking multitonal plink! "Dad, did you hear that?" "Yeah. His frame of reference came from lands far away. "It sounds like Mario getting upgraded." The Amazon rain forest isn't for everybody, I'll readily concede. One reason is that our kids love exotic animals and insects, which, of course, the rain forest delivers in seemingly limitless variety.

Peruvian Amazon The Peruvian Amazon is the area of the Amazon jungle included within the country of Peru, from east of the Andes to borders with Ecuador, Colombia, Brazil and Bolivia. This region comprises 60% of the country and is marked by a large degree of biodiversity. Peru has the second largest portion of the Amazon rain forest after the Brazilian Amazon. Extension[edit] Most Peruvian territory is covered by dense potataorsa forests on the east side of the Andes, yet only 5% of Peruvians live in this area. According to the Research Institute of the Peruvian Amazon (Instituto de Investigaciones de la Amazonía Peruana, IIAP), the spatial delineation of the Peruvian Amazon is as follows: Ecological criteria: 782,880.55 km² (60.91% of Peruvian territory and approximately 11.05% of the entire Amazon jungle).Hydrographic criteria or basin criteria: 96,922.47 km² (75.31% of Peruvian territory and approximately 16.13% of the whole Amazon basin). Ecoregions and climate[edit] Biodiversity[edit] Demography[edit]

Yoga Yoga (/ˈjoʊɡə/; Sanskrit: योग, Listen) is an Indian physical, mental, and spiritual practice or discipline. There is a broad variety of schools, practices and goals in Hinduism, Buddhism (including Vajrayana and Tibetan Buddhism[2][3][4]) and Jainism.[5][6][7][6] The best-known are Hatha yoga and Raja yoga. The origins of Yoga have been speculated to date back to pre-Vedic Indian traditions, but most likely developed around the sixth and fifth centuries BCE, in ancient India's ascetic circles, which are also credited with the early sramana movements. Yoga gurus from India later introduced yoga to the west, following the success of Swami Vivekananda in the late 19th and early 20th century. Many studies have tried to determine the effectiveness of yoga as a complementary intervention for cancer, schizophrenia, asthma, and heart disease. Terminology There are very many compound words containing yog in Sanskrit. Goal of Yoga According to Jacobsen, "Yoga has five principal meanings:[27] Buddhism

Yoga Basics Column - Not All Yoga Is Created Equal You say Ashtanga, I say Kundalini. What's the difference? Use this guide to find the right yoga for you. By Jennifer Cook As studies continue to reveal yoga's many health benefits, this centuries-old Eastern philosophy is fast becoming the new fitness soul mate for workout enthusiasts. Yet to applaud yoga for its physical benefits alone would only diminish what this entire system has to offer as a whole. "Americans are usually drawn to yoga as a way to keep fit at first, but the idea behind the physical practice of yoga is to encourage a deeper mind-body awareness," explains New York yoga teacher and author Beryl Bender Birch. Initially, the sole purpose of practicing yoga was to experience spiritual enlightenment. Classes that have gained popularity in the United States usually teach one of the many types of hatha yoga, a physical discipline which focuses mainly on asanas (postures) and breathwork in order to prepare the body for spiritual pursuits. Vigorous Vinyasas Ashtanga Power Yoga

The Power Of Yoga Stars do it. Sports do it. Judges in the highest courts do it. Everywhere else, Americans rush from their high-pressure jobs and tune in to the authoritatively mellow voice of an instructor, gently urging them to solder a union (the literal translation of the Sanskrit word yoga) between mind and body. Oprah Winfrey, arbiter of moral and literary betterment for millions of American women, devoted a whole show to the benefits of yoga earlier this month, with guest appearances by Turlington and stud-muffin guru Rodney Yee. Sounds great. By even asking the question, we provoke a clash of two powerful cultures, two very different ways of looking at the world. The few controlled studies that have been done offer cause for hope. To the skeptic, all evidence is anecdotal. A series of exercises as old as the Sphinx could prove to be the medical miracle of tomorrow — or just wishful thinking from the millions who have embraced yoga in a bit more than a generation.

Yoga Health Benefits, History, Types, Statistics, Equipment, Poses and Postures on MedicineNet Benefits of Yoga Q: I would like to start taking yoga classes. Please explain the different types of yoga and the benefits of each type. Author: Richard Weil, M.Ed., CDE Medical Editor: William C. A: Dozens of yoga types are practiced worldwide, but there isn't space here to review all of them, so I will limit my comments to Hatha, Kundalini, Bikram, and Ashtanga yoga, the four most popular types practiced in fitnesscenters and local yoga studios throughout the U.S. I'll start by telling you that yoga has been around for millennia.