Melbourne Curious: Little Lon: Melbourne's Vanished Community and Laneways. Walking past these days, you would be forgiven for thinking that the city block bordered by Lonsdale, Little Lonsdale, Exhibition and Spring Streets is just like any other. 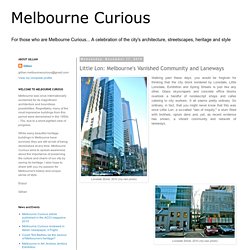 Glass skyscrapers and concrete office blocks overlook a handful of nondescript shops and cafes catering to city workers. It all seems pretty ordinary. So ordinary, in fact, that you might never know that this was once Little Lon: a so-called "den of iniquity," a slum filled with brothels, opium dens and, yet, as recent evidence has shown, a vibrant community and network of laneways. Little Lon first emerged as a working-class, residential precinct in the 1840s and 50s. Initially, it attracted impoverished immigrants, mainly from Ireland, who were unable to afford housing in the more reputable parts of the city. This is not to say that a seedier side did not exist. At the time, better housing for the poor was urgently needed. References: Historical Significance.

Melbourne Curious: Rediscovering Little Lon. Previously, I introduced Little Lon, a notorious slum and red-light district, which existed in Melbourne from around 1840 to 1948. 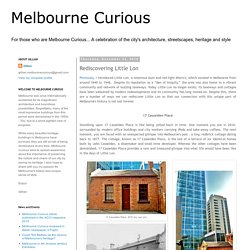 Despite its reputation as a “den of iniquity,” the area was also home to a vibrant community and network of buzzing laneways. Today Little Lon no longer exists; its laneways and cottages have been subsumed by modern redevelopments and its community has long moved on. Despite this, there are a number of ways we can rediscover Little Lon so that our connection with this unique part of Melbourne's history is not lost forever. Stumbling upon 17 Casselden Place is like being jolted back in time. One moment you are in 2010, surrounded by modern office buildings and city workers carrying iPads and take-away coffees. Covering only 53 square metres, the cottage comprises two tiny rooms and an outside toilet, revealing just how cramped life must have been, especially with the large families that were typical of the era! 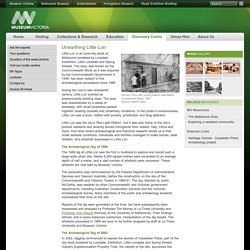 The area, also known as the Commonwealth Block as it was acquired by the Commonwealth Government in 1948, has been subject to five archaeological excavations since 1988. A bird’s eye view of Melbourne with Little Lon in the foreground, 1880.Source: State Library of Victoria, La Trobe Picture Collection During the mid to late nineteenth century, Little Lon evolved as predominantly working class.

The area was characterised by a series of laneways, with small properties packed together creating crowded and unsanitary conditions. Jouljet: The Urban Workshop - Open House Melbourne. Melbourne manages to mix the modernity of new, sleek skyscrapers with the history and beauty of the previous structures in many instances across the city - The Urban Workshop in Lonsdale Street is one such example. 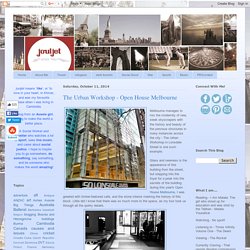 Glass and newness is the appearance of this building from the street, but stepping into the foyer for a peak into the secrets of the building during this year's Open House Melbourne, I was greeted with timber-featured cafe, and the stone interior marking the history of this block. Little did I know that there was so much more to the space, as my tour took us through all the quirky details. Walking in from the street, I noticed the wording under foot in stone - and was later informed that this lettering is an ode to the former slum and red light district of the large city block - Little Leichardt. Within the foyer, as our tour commenced, we were taken to see the cesspool artefacts, held in a circular display cabinet.

How would anyone get any work done with such a view? Brewery site a treasure trove of city's past - National - theage.com.au. Everyone digs in as archaeologists uncover a wealth of history. WHEN an old sewerage pipe near the centre of Ballarat needed replacing last year, archaeologists were called in for what was expected to be a routine dig of the surrounds. 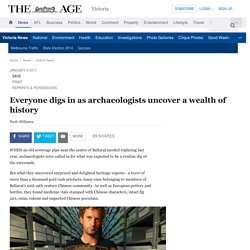 But what they uncovered surprised and delighted heritage experts - a trove of more than a thousand gold rush artefacts, many once belonging to members of Ballarat's mid-19th century Chinese community. As well as European pottery and bottles, they found medicine vials stamped with Chinese characters, intact fig jars, coins, tokens and imported Chinese porcelain. ''It would be not unexpected to find some sort of deposit, but nothing like the scale of what was found,'' says Jeremy Smith, senior archaeologist at Heritage Victoria.

The dig's success was rivalled by an excavation in Forest Street, Bendigo, which yielded remains of houses and an inn, an intact cellar and champagne, beer and wine bottles. ''Archaeology is becoming more and more recognised, which is not the case everywhere in Australia. 350 1292 1 PB.