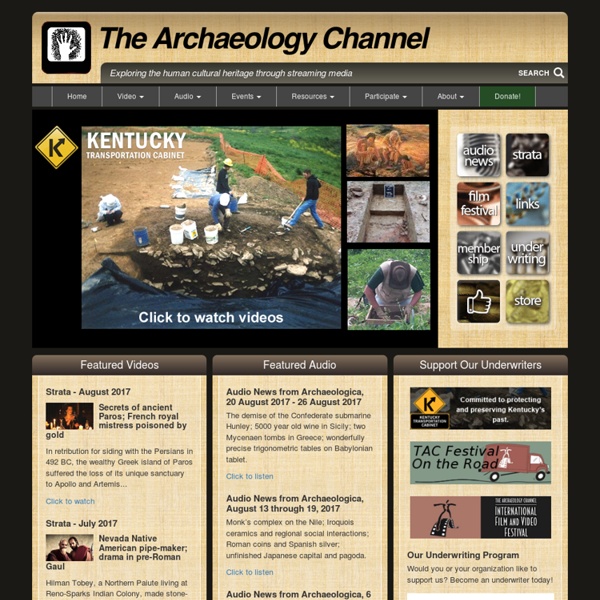 Video News from TAC - March 2013 Play with Windows Media Player: 300k or 700k A Tomb Raider in Cyprus; film clips from TAC Festival 2013 (1) During his stay on the island from 1865 until 1876, the American consul in Cyprus, Luigi Cesnola, became an amateur archaeologist to profit from the trade of antiquities. He gathered up more than 35,000 objects. When local authorities prohibited the export of this enormous collection, Cesnola loaded his treasures onto boats and shipped them to New York. (2) Lisa Westwood launches our preview series for The Archaeology Channel International Film and Video Festival (7-11 May 2013, Eugene, Oregon) with nine short clips.

Writing in Hieroglyphs Learn about hieroglyphs and writing © 2012 This website is produced by the Student Recruitment, Admissions and International Development Division at The University of Manchester NOVA The 100-Year-Old Idea That Could Change Flight Inspired by birds, bats, and the Wright brothers, engineers are building the next breakthrough in aviation. From NOVA Next | Feb 22, 2017 Key Brain Regions Found To Be Smaller in People With ADHD In the largest study of its kind, research shows people with ADHD have smaller brain regions—including the amygdala, which is responsible for regulating emotions.

Remote Sensing Archeology Research at NASA "The stereotype has archaeologists just digging up spearheads and pottery and anthropologists just writing down the words of primitive tribes. But we're examining how people adapted to their environment throughout time, how they experienced environmental shift, why cultures come and go. Soils associated with artifacts are as important as the artifacts themselves--probably more relevant to us than the actual objects. Now more than ever, archaeological research is interdisciplinary: botany, forestry, soil science, hydrology--all of which contribute to a more complete understanding of the earth, climatic shifts, and how people adapt to large regions.

Mysterious Pyramid Baffles Chinese Scientists No one seems to know the origin or the meaning behind a mysterious pyramid that sits atop Mount Baigong in western China that local legends claim is an alien UFO launch tower. Nine scientists form the team that will travel to the western province of Qinghai and the mouth of this 165-198 foot tall structure known as the “ET Relics.” “The pyramid has three caves with openings shaped like triangles on its façade and is filled with red-hued pipes leading into the mountain and a nearby salt water lake,” says China’s state-run Xinhua agency.

Who invented clothes? A Palaeolithic archaeologist answers "Who invented clothes?" It's one of those brilliant questions that children ask, before they learn that the big things we wonder about rarely have simple answers. It's the kind of thing that archaeologists like me get put on the spot about when chatting to kids, and we love to have a crack at answering. Saturday's "Ask a grown up" section featured just that question, from eight-year old Harriet, with an answer by Hadley Freeman, fashion expert and fantastic writer. Hadley's response was, as usual, entertainingly breezy, with some refreshing encouragement to Harriet to experiment in developing her own style; but, like a fine chiffon, it was a little flimsy in substance.

Joukowsky Institute for Archaeology "Think Like an Archaeologist", Nathan Bishop Middle School, Providence, Rhode Island "Envisioning the Tomb of the First Emperor", Main Green, Brown University, Providence, RI Geophysical research, Aldrich House, Providence, RI Lost ancient civilisation's ruins lie beneath Gulf, says boffin High performance access to file storage Refugees from a lost civilisation whose ruins and relics lie submerged on the seabed deep beneath the Persian Gulf may have founded ancient, advanced Middle Eastern societies thousands of years ago in the time before the Pharaohs. According to Jeffrey Rose, a Birmingham uni archaeologist, recent excavations and discoveries indicate that a large number of substantial and relatively sophisticated settlements sprang up around the shores of the Persian Gulf quite suddenly perhaps 7,500 years ago.

New to the Archaeologist’s Tool Kit: The Drone Continue reading the main story Video CHEPÉN, Peru — A small remote-controlled helicopter buzzed over ancient hilltop ruins here, snapping hundreds of photographs. Below, stone walls built more than a thousand years ago by the Moche civilization gave way to a grid of adobe walls put up only recently by what officials said were land speculators.