This Is What the Internet Looked Like From the ’80s to the Early ’00s. How to Send an Email in 1984. Teens literally can't even with Windows 95 in this video. If you needed another way to feel like a barely relevant, crusty old, here it is. 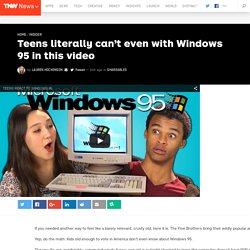 The Fine Brothers bring their wildly popular and fairly controversial ‘React’ series to Windows 95, an operating system that most of the teens recruited to navigate were not even born to witness. Yep, do the math: Kids old enough to vote in America don’t even know about Windows 95. Interested in tech, huh? Don’t miss our biggest TNW Conference yet! Steve Wozniak on Kurzweil's Singularity, Moore's Law, Wearable Tech, and More. AT&T’s History of Invention and Breakups. The Secret History of Silicon Valley and the Toxic Remnants of the First Computers  This Old Tech: Exploring the lost world of Prodigy. Remember when... 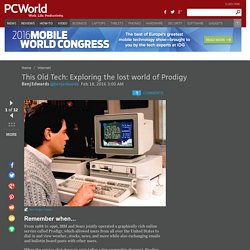 From 1988 to 1996, IBM and Sears jointly operated a graphically rich online service called Prodigy, which allowed users from all over the United States to dial in and view weather, stocks, news, and more while also exchanging emails and bulletin board posts with other users. When the service shut down in 1999 (after a few ownership changes), Prodigy took its rich history of graphical screens with it. Scientiflix - Archaeo-Chat: Museums: The Future is Digital? ... The Malware Museum : Free Software : Download & Streaming. The Malware Museum by Mikko Hypponen movies eye favorite 0 comment 0 Presented at DEF CON 19 in Las Vegas, Nevada in 2011. 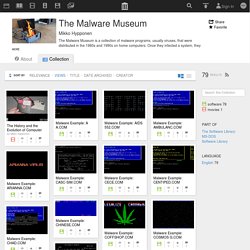 This Is What the Internet Looked Like From the ’80s to the Early ’00s. Marvin Minsky’s Vision of the Future. In July of 1979, a computer program called BKG 9.8—the creation of Hans Berliner, a professor of computer Science at Carnegie-Mellon University, in Pittsburgh—played the winner of the world backgammon championship in Monte Carlo. 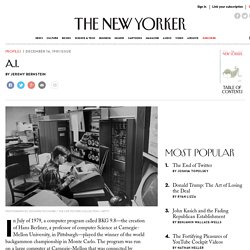 The program was run on a large computer at Carnegie-Mellon that was connected by satellite to a robot in Monte Carlo. The robot, named Gammonoid, had a visual-display backgammon board on its chest, which exhibited its moves and those of its opponent, Luigi Villa, of Italy, who by beating all his human challengers a short while before had won the right to play against Gammonoid. The stakes were five thousand dollars, winner take all, and the computer won, seven games to one. It had been expected to lose. In a recent Scientific American article, Berliner wrote: UX Timeline, back to the past! Scott Fahlman, Inventor Of The Emoticon, Calls Emoji 'Ugly' :'-( Fateful Phone Call Spawned Moore’s Law [Excerpt] PorkRocket — inthenoosphere: 5 megabyte hard drive being... 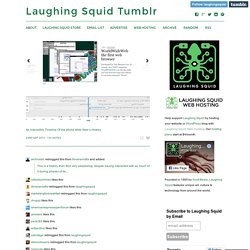 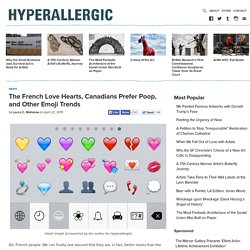 We can finally rest assured that they are, in fact, better lovers than the rest of us. That’s because a new report breaking down emoji use by country and language found that hearts make up 55% of emoji typed by French speakers. That’s four times the international average, and three times as much as the next most “heart-y” language. Is Google’s X Lab the Xerox PARC of Our Day? A version of this essay was originally published at Tech.pinions, a website dedicated to informed opinions, insight and perspective on the tech industry. 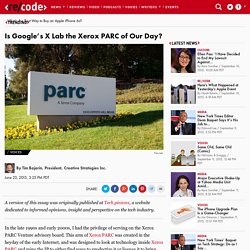 I have to admit that during this time I was like a kid in a candy store. The advisory board would meet at various Xerox locations around the world, and researchers and scientists would show us what they were working on. We would then research the feasibility or marketability of the products put in front of us. A few would actually be sponsored by this Xerox Venture fund along with various VCs, while others would be licensed for use by big companies and startups that could use the IP to build and grow their companies. Linux-infographic.png (1280×1024) Most Awarded Brand. Watch How This 1981 Film Accurately Predicted The Current State Of The World. The history of Apple design as told by its former designers. Apple didn’t always get the importance of design. 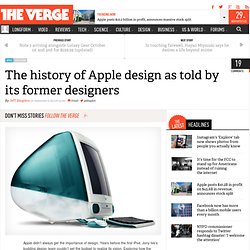 Years before the first iPod, Jony Ive’s budding design team couldn’t get the budget to realize its vision. Exploring how the company went from commodity hardware to having the most iconic designs in the industry, Fast Company is offering up a six-part oral history of Apple’s rise from the people who were actually there. The series wraps up next week, but the first three installments cover OS X's "lickable" Quartz graphics, the conception of the Apple Store, and Steve Jobs' bizarre request that all the company's error messages be haikus.

Speaking about the early days before Jobs’ return in 1996, senior industrial designer Thomas Meyerhoffer says, "We wanted to put design forward as a competitive tool for Apple, but nobody really understood what design could do. Web History, a timeline. This Cartoon Perfectly Sums Up the Optimism of 1950s Futurism. Why Won’t URLs Die? — re:form. The Uniform Resource Locator has been the user-interface lingua franca of the internet for decades. 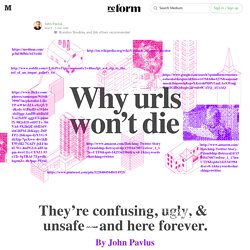 A browser window just wouldn’t look right without it up there at the top. But as the web has matured into a GUI-driven, mobile-first, app-serving consumer operating system in its own right, the URL stubbornly persists as an arcane, command-line-esque relic of the internet’s ultra-geeky origins. Why? Apple and Google seem to be wondering the same thing. A quick glance at their browsing apps seems to imply that the URL is being slowly but surely shown the door.

Meanwhile, hackers can still use ill-designed URL addresses as hidden-in-plain-sight invitations for committing fraud and identity theft. I put the question to Jon Bell, a designer at Twitter who takes these kinds of details seriously enough to write 10,000-word UX critiques in his spare time. Why Are URLs Full of So Many Garbage Characters? Bits.blogs.nytimes. The march of progress in computing is a climb. 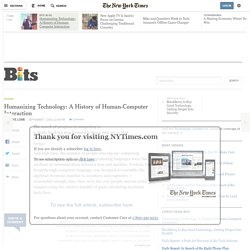 Each big step forward is also a step up, so that communication is further away from the machine, more on human terms. How I came to find Linux. I saw my first Sun workstation in the winter of 1992, when I was an undergraduate at Purdue University. At the time, I was a student in the Krannert School of Management, and a childhood love of computers had just been reawakened by a mandatory computer programming course I had taken during the fall semester (we were given the choice between COBOL and FORTRAN—which even in 1992 seemed highly dated—and I had picked COBOL because it seemed the more “business” of the two).

Ten years or so earlier, my father, a professor of entomology at Purdue, had replaced his typewriter at work with an Apple II+. Thinking his nine-year-old son might get a kick out of it, he brought it home one weekend along with a Space Invaders-like game he had bought at the local ComputerLand. I spent hours on the computer that weekend. T E X T F I L E S D O T C O M. Technological Vs. Creative Thought. Watch How This 1981 Film Accurately Predicted The Current State Of The World. Web and HyperText History. The Great Works of Software — The Message. Is it possible to propose a software canon?

To enumerate great works of software that are deeply influential—that changed the nature of the code that followed? Canons emerge over time, as certain works gain in critical appreciation. But software is mutable stuff, quick to obsolesce. Only banks, governments, and your parents run the same programs for more than a couple years at a time; the rest of us are forced to upgrade to new versions every two years or we risk being regarded as backward-minded hill people. As far as I can tell, no truly huge world-shifting software product has ever existed in only one version (even Flappy Bird had updates). So I set myself the task of picking five great works of software. I realized that each one of these technologies set out to help people do something but consequently grew and changed over time. Microsoft Office: How do we communicate about work? Computer people often talk about products. Other people have made similar lists. Microsoft Office Pac-Man.