The Smoked Corpses of Aseki, Papua New Guinea. We tend to associate mummies with ancient Egypt, but a lot of culture around the world practiced mummification. 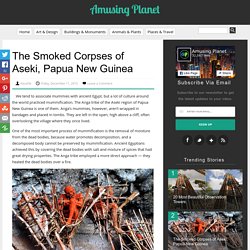 The Anga tribe of the Aseki region of Papua New Guinea is one of them. Anga’s mummies, however, aren't wrapped in bandages and placed in tombs. They are left in the open, high above a cliff, often overlooking the village where they once lived. 42.zip. A 1970's teenager's bedroom - Not concerned with Medicare or other adult things my bedroom was filled with stereo equipment.

Updated 05 Sep 2012 Introduction: This page shows some of the evolution of my stereo system and involvement with electronics as a teenager in the mid 1970s. 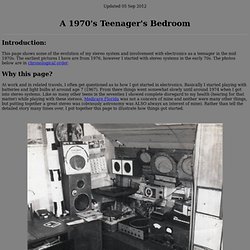 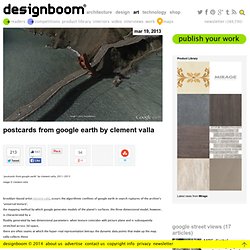 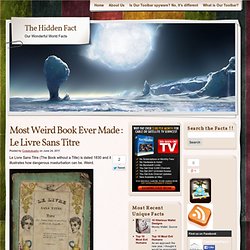 Weird. He was young, handsome; his mother’s fond hope He corrupted himself! … soon he bore the grief of his error, old before his time… his back hunches.. A devouring fire sears his gut; he suffers horrible stomach pains… See his eyes once so pure, so brilliant; they are extinguished! He can’t walk any more… his legs give way Hideous dreams disturb his slumber… he cannot sleep… His teeth rot and fall out… His chest burns… he spits up blood… His hair, once so lovely, falls as if from old age; his scalp grows bald before his age…. He hungers; he wants to satiate his appetite; food won’t stay down in his stomach… Mozilla Firefox (Build 20121128204232) Cool Abandoned Places In The World 8 - Glorious Mind. Posted by admin on 10 Dec 2012 / 2 Comments Cool Abandoned Places In The World -Part 8 :Varosha In the early 1970’s, the Varosha quarter in Famagusta, Cyprus was one of the Mediterranean’s most popular and glamorous tourist destinations. 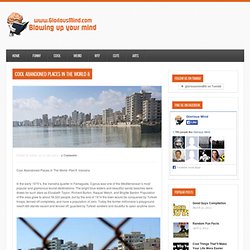 The bright blue waters and beautiful sandy beaches were draws for such stars as Elizabeth Taylor, Richard Burton, Raquel Welch, and Brigitte Bardot. How to Get a Copy of Your FBI File (idea) by narzos. The Freedom of Information Act is a powerful thing. 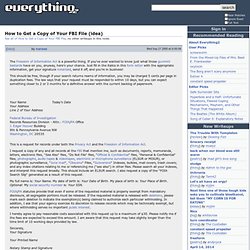 If you've ever wanted to know just what those guvmint bastards have on you, anyway, here's your chance. Just fill in the italics in this form letter with the appropriate information, get your signature notarized, send it off, and you're in business! This should be free, though if your search returns reams of information, you may be charged 5 cents per page in duplication fees. The law says that your request must be responded to within 10 days, but you can expect something closer to 2 or 3 months for a definitive answer with the current backlog of paperwork.

Download the PDF of these ideas : Public Art Concepts - Dan Sternof Beyer 2011 (2mb) [ New American Public Art ] The most beautiful suicide. On May 1, 1947, Evelyn McHale leapt to her death from the observation deck of the Empire State Building. 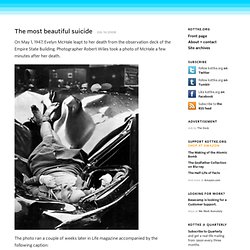 Photographer Robert Wiles took a photo of McHale a few minutes after her death. The photo ran a couple of weeks later in Life magazine accompanied by the following caption: On May Day, just after leaving her fiancé, 23-year-old Evelyn McHale wrote a note. Mozilla Firefox (Build 20121024073032) Time Warp Wives: Meet the women who really do live in the past. By Diana Appleyard Updated: 09:06 GMT, 8 August 2008 The credit crunch, a knife crime epidemic - no wonder so many of us are sick of the 21st century. 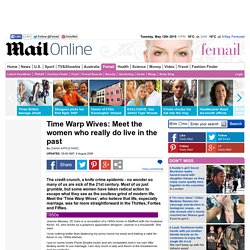 Most of us just grumble, but some women have taken radical action to escape what they see as the soulless grind of modern life. Meet the 'Time Warp Wives', who believe that life, especially marriage, was far more straightforward in the Thirties, Forties and Fifties. 1950s Joanne Massey, 35, lives in a recreation of a 1950s home in Stafford with her husband Kevin, 42, who works as a graphics application designer. “Did you know that stones bleed?” Journey in the mysterious world of Pino Sciola.

Pino Sciola stone museum “What is the first word that comes to your mind when you think of a stone?” 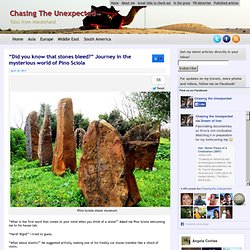 Asked me Pino Sciola welcoming me to his house-lab. “Hard? Rigid?” City of the Silent - The Taphophile's Handbook. Medical Mnemonics. Surfing The Apocalypse. FEBRUARY 2000 The following item was placed for sale to the highest bidder at the online auction site Ebay. 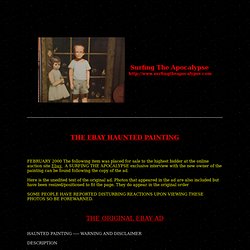 A SURFING THE APOCALYPSE exclusive interview with the new owner of the painting can be found following the copy of the ad. Here is the unedited text of the original ad. Pareidoloop. ~~ MrWong's Soup'Partments ~~ The Original! Since 2002! ~~ Get Your Apartment Today! -=TERMINATED=- ~~ Ghost Quiz. Ausweis. Ausweis A Reality-Hacking Experiment. The world's changing. The color of art is #A79F94 (2009) Ever Dream This Man? 8 Artists Who Poured Their Heart and Soul Into Their Work (Also: Their Blood and Urine) All artists put a little bit of their soul into every piece. But these artists put their soul – and a whole lot more – into their art. 1. Hair and Nails. Can you really stand dead silence?

Image evolution. What is this? A simulated annealing like optimization algorithm, a reimplementation of Roger Alsing's excellent idea. The goal is to get an image represented as a collection of overlapping polygons of various colors and transparencies. We start from random 50 polygons that are invisible. In each optimization step we randomly modify one parameter (like color components or polygon vertices) and check whether such new variant looks more like the original image. The SCP Foundation. Response to MPA Threat Letter. Apocalyptic Detailed Models. By Daily Mail Reporter Published: 15:23 GMT, 3 April 2012 | Updated: 18:18 GMT, 3 April 2012. Most Interesting Libraries of the World. Maps. Home page Down to: 6th to 15th Centuries | 16th and 19th Centuries | 1901 to World War Two | 1946 to 21st Century.