The Teotihuacans exhumed their dead and dignified them with make-up. In collaboration with the National University of Mexico, a team of Spanish researchers has analysed for the first time remains of cosmetics in the graves of prehispanic civilisations on the American continent. 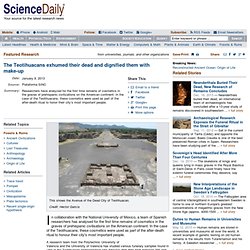 In the case of the Teotihuacans, these cosmetics were used as part of the after-death ritual to honour their city's most important people. A research team from the Polytechnic University of Valencia and the University of Valencia has studied various funerary samples found in urns in the Teotihuacan archaeological site (Mexico) that date from between 200 and 500 AD. The scientists have been researching Mayan wall paintings in Mexico and Guatemala since 2006. Hadrian's Auditorium: Ancient Roman Arts Center From 123 AD Discovered (PHOTO) King Louis XVI's Blood Found In Decorative Squash Centuries After Beheading, DNA Study Shows. Tia Ghose, LiveScience Staff Writer Published: 01/02/2013 02:17 PM EST More than 200 years ago, France's King Louis XVI was killed (along with his wife, Marie Antoinette) via guillotine, and legend has it someone used a handkerchief to soak up the king's blood, then stored the handkerchief in a gourd. 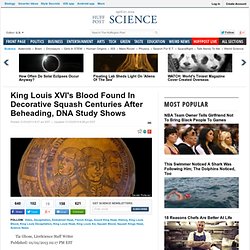 Now scientists have confirmed that a squash emblazoned with figures from the French Revolution indeed contains the dried blood of the executed king. Scientists matched DNA from the blood with DNA from a detached and mummified head believed to be from a direct ancestor of King Louis XVI, the 16th-century French king Henry IV. The new analysis, which was published Dec. 30 in the journal Forensic Science International, confirmed the identity of both French royals. "We have these two kings scattered in pieces in different places in Europe," said study co-author Carles Lalueza-Fox, a paleogenomics researcher at Pompeu Fabra University in Spain. 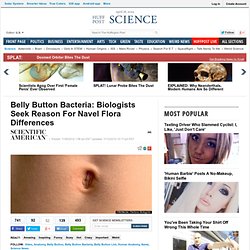 I started out as a respectable sort of ecologist studying rain forests and then at some point my road turned and I ended up where I am today, lost among the belly buttons. I know how it happened. Two years ago we began to focus much of our lab’s work on engaging the public. One way to make science public is to work with people to study their own lives (see yourwildlife.org). The idea was simple. We quickly found that peoples’ belly buttons differed in terms of which species live in them. We began to more seriously wonder what explained the differences from one person to the next.

We solicited even more involvement—more students to help with research, more petri dishes and, more ideas from participants, and, of course, more belly buttons. Mass extinction study provides lessons for modern world. Fuller picture of human expansion from Africa. A new, comprehensive review of humans' anthropological and genetic records gives the most up-to-date story of the "Out of Africa" expansion that occurred about 45,000 to 60,000 years ago. 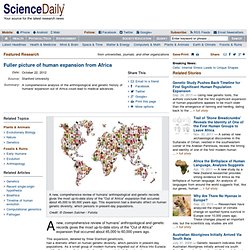 This expansion, detailed by three Stanford geneticists, had a dramatic effect on human genetic diversity, which persists in present-day populations. As a small group of modern humans migrated out of Africa into Eurasia and the Americas, their genetic diversity was substantially reduced. In studying these migrations, genomic projects haven't fully taken into account the rich archaeological and anthropological data available, and vice versa. This review integrates both sides of the story and provides a foundation that could lead to better understanding of ancient humans and, possibly, genomic and medical advances. The anthropological information can inform geneticists when they investigate certain genetic changes that emerge over time.

Caesar, the Orchid Chief. Turns out the early Romans were wild about orchids. 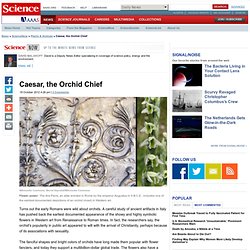 A careful study of ancient artifacts in Italy has pushed back the earliest documented appearance of the showy and highly symbolic flowers in Western art from Renaissance to Roman times. In fact, the researchers say, the orchid's popularity in public art appeared to wilt with the arrival of Christianity, perhaps because of its associations with sexuality.

The fanciful shapes and bright colors of orchids have long made them popular with flower fanciers, and today they support a multibillion-dollar global trade. The flowers also have a symbolic value that spans many cultures due to their resemblance to both male and female sexual organs; the flower's scientific name—Orchis—derives from a Greek word for testicles. Spot Where Julius Caesar Was Stabbed Discovered. Archaeologists believe they have found the first physical evidence of the spot where Julius Caesar died, according to a new Spanish National Research Council report. 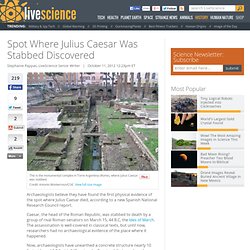 Caesar, the head of the Roman Republic, was stabbed to death by a group of rival Roman senators on March 15, 44 B.C, the Ides of March. The assassination is well-covered in classical texts, but until now, researchers had no archaeological evidence of the place where it happened. Now, archaeologists have unearthed a concrete structure nearly 10 feet wide and 6.5 feet tall (3 meters by 2 meters) that may have been erected by Caesar's successor to condemn the assassination. 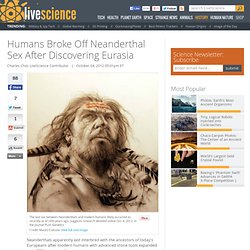 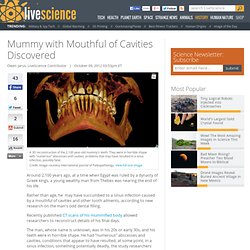 Rather than age, he may have succumbed to a sinus infection caused by a mouthful of cavities and other tooth ailments, according to new research on the man's odd dental filling. Recently published CT scans of his mummified body allowed researchers to reconstruct details of his final days. Chinese Money Tree History Uncovered By Chemistry. This Behind the Scenes article was provided to LiveScience in partnership with the National Science Foundation. 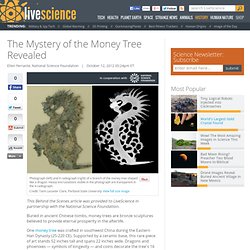 Buried in ancient Chinese tombs, money trees are bronze sculptures believed to provide eternal prosperity in the afterlife. One money tree was crafted in southwest China during the Eastern Han Dynasty (25-220 CE). Supported by a ceramic base, this rare piece of art stands 52 inches tall and spans 22 inches wide. Dragons and phoenixes — symbols of longevity — and coins decorate the tree's 16 bronze leaves. The Portland Art Museum acquired the tree as a gift from a private collection. The museum partnered with assistant professor of chemistry Tami Lasseter Clare and her team from Portland State University to learn more about the tree and its mysterious past.