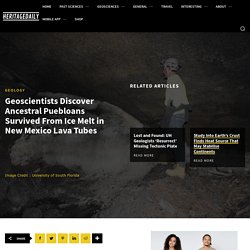 But surviving in what Spanish explorers would later name El Malpais, or the “bad lands,” required ingenuity now being explained for the first time by an international geosciences team led by the University of South Florida. Exploring an ice-laden lava tube of the El Malpais National Monument and using precisely radiocarbon- dated charcoal found preserved deep in an ice deposit in a lava tube, USF geosciences Professor Bogdan Onac and his team discovered that Ancestral Puebloans survived devastating droughts by traveling deep into the caves to melt ancient ice as a water resource. “The melting cave ice under current climate conditions is both uncovering and threatening a fragile source of paleoenvironmental and archaeological evidence,” he added. Göbekli Tepe. Archaeological and UNESCO World Heritage Site The details of the structure's function remain a mystery. 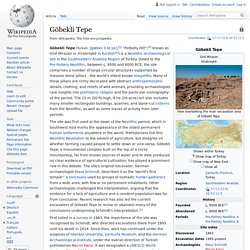 The excavations have been ongoing since 1996 by the German Archaeological Institute, but large parts still remain unexcavated. In 2018, the site was designated a UNESCO World Heritage Site.[10] Chronological context[edit] Researchers have examined the burial mound where the Gokstad Viking ship was found. What they found surprised them. The Gokstad ship is one of the most famous Viking ships in the world. 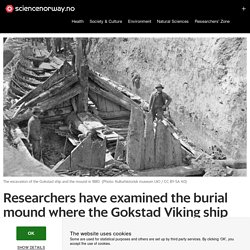 It lay almost completely in peace inside a burial mound in Vestfold for up to a thousand years. Pharaoh Ramesses VI Tomb. Londinium – Roman London. Londinium is the name given to the Roman city, now occupied by the City of London that contains the historic centre and the primary central business district of London. 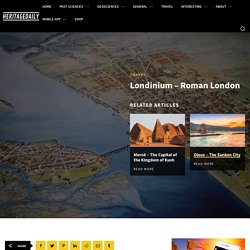 Unlike many Roman settlements established on existing Oppidum, there does not appear to be any prior Iron Age settlements before the Roman conquest of AD43 within the Roman city limits. Several fortified Iron Age hillforts and enclosures are evident in the greater London area, like those at Wimbledon and Epping Forest, possibly attributed to either the Trinovantes or Catuvellauni tribes. 'Extraordinary' Roman villa reopened to public in Herculaneum. "The Works of The Old Men" Are Unexplained Structures in the Middle Eastern Desert. There are lots of good reasons to believe this is how things went down. 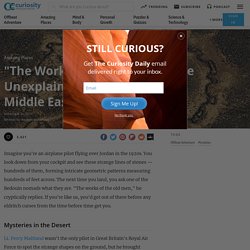 For one thing, rock art found in some areas with a plentitude of kites depicts gazelles being slain in exactly that fashion, and researchers think that art suggests the slaughter wasn't purely for food. Instead, they may have been planned to commemorate spiritually significant events — you know, kind of like how you blow out candles on your birthday. Only it's an entire species of gazelle. Aren't humans great? Roman Forts & Fortlets of the Antonine Wall - Interactive Map. Antone Wall Map – Hadrian’s Wall is generally thought of as the northernmost border of the Roman Empire in Britannia, but the Romans actually pushed further north into Scotland and built another wall, the Antonine Wall. 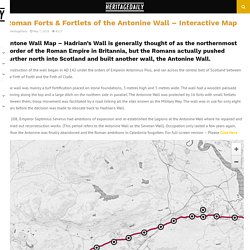 Construction of the wall began in AD 142 under the orders of Emperor Antoninus Pius, and ran across the central belt of Scotland between the Firth of Forth and the Firth of Clyde. The wall was mainly a turf fortification placed on stone foundations, 3 metres high and 5 metres wide. The wall had a wooden palisade running along the top and a large ditch on the northern side in parallel. The Antonine Wall was protected by 16 forts with small fortlets between them; troop movement was facilitated by a road linking all the sites known as the Military Way. This Is What The Forgotten 7 Wonders Of The Ancient World Really Looked Like In Their Prime. What is the first thing you do before planning a trip? 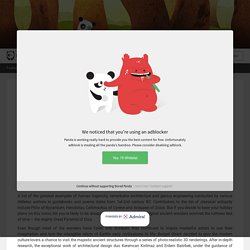 Hop on the convenient TripAdvisor or one of thousands other websites available for advice, must-see destinations, trip highlights and candid travelers’ photos. Before the magical power of the Internet, people had to discover everything first-hand and sharing their experience on social media wasn’t an option. Ancient tourists had to turn to scholarly advice when it came to beautiful sights to behold. And here is when the ultimate “must-see” list of Seven Wonders of the World came about. A list of the greatest examples of human ingenuity, remarkable architecture and genius engineering conducted by various Hellenic authors in guidebooks and poems dates from 1st-2nd century BC.

Pompeii ‘fast food’ bar unearthed in ancient city after 2,000 years. A well-preserved frescoed “fast food” counter is among the latest discoveries unearthed by archaeologists in the ancient Roman city of Pompeii. 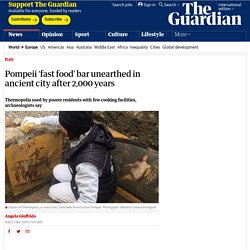 The 150 or so thermopolia, or snack bars, dotted across the city were mostly used by the poorer residents, who rarely had cooking facilities in their home, to grab a snack or drink. Typical menus included coarse bread with salty fish, baked cheese, lentils and spicy wine. Viking homes were stranger than fiction: portals to the dead, magical artefacts and ‘slaves’ This Roman Bathhouse Was Built Over 2,000 Years Ago And Is Still Up And Running. Hidden history of Rome revealed under world's first cathedral.

Watch These Cool GIFs Restore Ancient Ruins to Their Former Glory. First evidence for Julius Caesar's invasion of Britain discovered - HeritageDaily - Heritage & Archaeology News. How Researchers Uncovered a Massive Void in the Great Pyramid of Giza. Some 4,500 years ago, the Egyptian pharaoh Khufu ordered the construction of a Great Pyramid to serve as his own personal gateway to enter the afterlife. 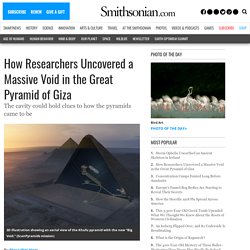 Composed of three chambers—the King’s chamber, the Queen’s chamber, and an underground chamber—the resulting edifice was every bit as grand as its purpose. But for centuries, rumors have swirled that the 455-foot structure harbors more hidden nooks and passageways. Researchers first tested the idea of these secret chambers in 1986. 7 Ancient Long Barrows in England - HeritageDaily - Heritage & Archaeology News. A long barrow is a prehistoric monument dating to the early Neolithic period. 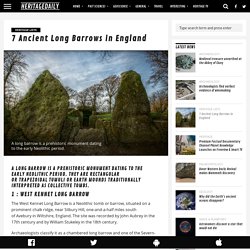 They are rectangular or trapezoidal tumuli or earth mounds traditionally interpreted as collective tombs. 1 : West Kennet Long Barrow The West Kennet Long Barrow is a Neolithic tomb or barrow, situated on a prominent chalk ridge, near Silbury Hill, one-and-a-half miles south of Avebury in Wiltshire, England. Ancient data, modern math and the hunt for 11 lost cities of the Bronze Age.

Sciencemag. The farming town of Broo on Scotland’s Shetland Islands was no stranger to extreme weather. Located on an archipelago just south of the Arctic Circle, its inhabitants had braved lashing winds and bitter cold winters. But it was something else that did Broo in: sand. Beginning around 1665, a series of sandstorms like nothing seen before buffeted the island, burying homes, destroying fertile soil, and eventually forcing the townspeople to flee.

Now, scientists think they know what caused the freak weather event—and why it left neighboring towns relatively unscathed. People have built small farms on the nearly treeless Shetland Islands for thousands of years. Why Broo in particular suffered so much from the sands while neighboring farms survived was long a mystery. Mexico Is Hiding The World’s Largest Pyramid. In the city of Cholula in central Mexico there stands a hill with a giant church on top which hides a manmade pyramid filled with secrets. MEXICO CITY—In 1519, Hernán Cortés and his conquistadors arrived in Cholula, one of the largest cities in central Mexico. Roughly 50 miles southeast from modern day Mexico City, its tens of thousands of residents sat in the shadows of the 17,000 foot Popocatépetl volcano.

It had a temple featuring more stairs, claimed one Spaniard, than the main pyramid in Tenochtitlan. Mysterious Earthen Mounds Discovered in Ancient Cambodian Cities. Using airborne laser-scanning equipment, archaeologists have discovered vast fields of dome-shaped earthen mounds, arranged into gridded patterns, in 1,000-year-old Cambodian cities. The scientists are puzzled as to what these vast "dome fields" (as archaeologists sometimes call them) would have been used for around 1,000 years ago, calling them "the most enigmatic features" from this archaeological landscape. Evidence of Sophisticated, Ancient, Unknown Cultures in North America....Page 38. Photo: Burnt Hill Site-Western Massachusetts, by Colgate Gilbert.

Travel - The mystery of England’s ancient tunnels. “How do you like spiders?” Asked James Gossip, an archaeologist, British prehistory expert and my guide to this subterranean world – one, apparently, that’s already inhabited. Ancient Pompeii Is Alive Again as Italian Officials Unveil Six Restored Ruins. Mesa Verde: Cliff Dwellings of the Anasazi. The Mesa Verde archaeological region, located in the American Southwest, was the home of a pueblo people who, during the 13th century A.D., constructed entire villages in the sides of cliffs.

Mesa Verde is Spanish for “green table” and the people who lived there are often called the “Anasazi,” a Navajo word that has been translated as “the ancient ones” or “enemy ancestors.” While they did not develop a writing system, they left behind rich archaeological remains that, along with oral stories passed down through the ages, have allowed researchers to reconstruct their past. Thermal Scans Of Egypt's Great Pyramid Reveal 'Impressive' Anomaly. Mysterious Symbols in Kazakhstan: How Old Are They, Really? Sprawling earthen swastika designs, crosses and rings that cover part of Kazakhstan are becoming a little less mysterious: Archaeologists have found and investigated 60 of these symbols, called geoglyphs, and determined when they were created and what their potential function might have been.

The Kazakhstan geoglyphs, described at an archaeology conference in Istanbul and reported by Live Science last year, range in size from 90 to 400 meters (295 to 1,312 feet) across — longer than a commercial aircraft. NASA Adds to Evidence of Mysterious Ancient Earthworks. Prehistoric Village Of 'National Significance' Unearthed Amid Miami Skyscrapers. Photos: The Secret Passageways of Hadrian's Villa. 'Secret' Labyrinth of Tunnels Under Rome Mapped. Deep under the streets and buildings of Rome is a maze of tunnels and quarries that dates back to the very beginning of this ancient city. Now, geologists are venturing beneath Rome to map these underground passageways, hoping to prevent modern structures from crumbling into the voids below. An ancient city thought lost is exhumed from the depths of the ocean. Atlas Obscura on Slate is a new travel blog. Robot discovers three unexplored passages in 2,000-year-old tunnel near the Pyramid of the Sun in Mexico.