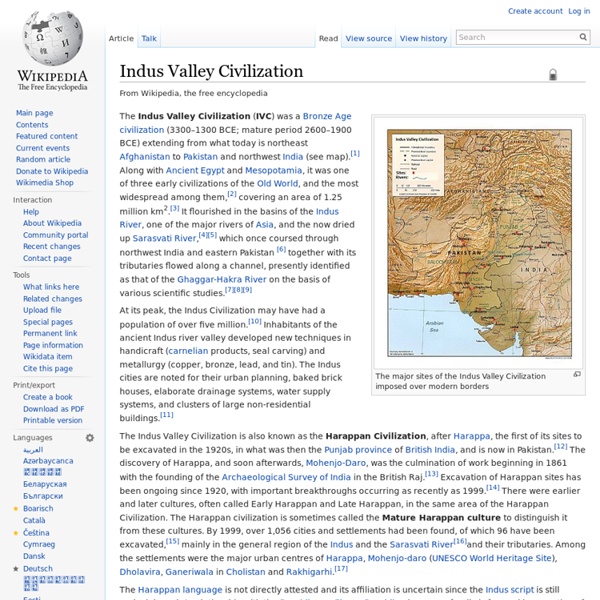 The major sites of the Indus Valley Civilization imposed over modern borders The Indus Valley Civilization (IVC) was a Bronze Age civilization (3300–1300 BCE; mature period 2600–1900 BCE) extending from what today is northeast Afghanistan to Pakistan and northwest India (see map). Along with Ancient Egypt and Mesopotamia, it was one of three early civilizations of the Old World, and the most widespread among them, covering an area of 1.25 million km2.[3] It flourished in the basins of the Indus River, one of the major rivers of Asia, and the now dried up Sarasvati River,[4][5] which once coursed through northwest India and eastern Pakistan together with its tributaries flowed along a channel, presently identified as that of the Ghaggar-Hakra River on the basis of various scientific studies.[7][8][9] The Harappan language is not directly attested and its affiliation is uncertain since the Indus script is still undeciphered. Discovery and history of excavation Chronology Geography Cities Related:  Ancient History

Maurya Empire The Maurya Empire was a geographically extensive Iron Age historical power in ancient India, ruled by the Maurya dynasty from 322–185 BCE. Originating from the kingdom of Magadha in the Indo-Gangetic Plain (modern Bihar, eastern Uttar Pradesh) in the eastern side of the Indian subcontinent, the empire had its capital city at Pataliputra (modern Patna).[1][2] The Empire was founded in 322 BCE by Chandragupta Maurya, who had overthrown the Nanda Dynasty and rapidly expanded his power westwards across central and western India, taking advantage of the disruptions of local powers in the wake of the withdrawal westward by Alexander's Hellenic armies. By 316 BCE the empire had fully occupied Northwestern India, defeating and conquering the satraps left by Alexander.[3] Chandragupta then defeated the invasion led by Seleucus I, a Macedonian general from Alexander's army, gaining additional territory west of the Indus River.[4] History[edit] Chandragupta Maurya and Chanakya[edit] Bindusara[edit]

Jainism Jainism (/ˈdʒeɪnɪzəm/[1] or /ˈdʒaɪnɪzəm/[2]), traditionally known as Jin Sashana or Jain dharma (Sanskrit: जैन धर्म), is an Indian religion that prescribes a path of nonviolence (ahimsa) towards all living beings. Practitioners believe that nonviolence and self-control are the means by which they can obtain liberation. The three main principles of Jainism are non-violence (ahimsa), non-absolutism (anekantavada) and non-possessiveness (aparigraha). Followers of Jainism take 5 major vows: non-violence, non-lying, non-stealing, chastity, and non-attachment. Asceticism is thus a major focus of the Jain faith. Jainism is derived from the word Jina (conqueror) referring to a human being who has conquered inner enemies like attachment, desire, anger, pride, greed, etc. and possesses infinite knowledge (Kevala Jnana). Doctrine[edit] Non-violence (ahimsa)[edit] The hand with a wheel on the palm symbolizes Ahimsa (nonviolence). Non-absolutism[edit] Main article: Anekantavada Non-possessiveness[edit]

Middle kingdoms of India Middle kingdoms of India (or Classical India) refers to the political entities in India from the 3rd century BCE and the 13th century CE. This period begins after the decline of the Maurya Empire, and the corresponding rise of the Satavahana dynasty, beginning with Simuka, from 230 BC. The "Middle" period lasts for some 1,500 years, and ends in the 13th century, with the rise of the Delhi Sultanate and the end of the Chalukya Cholas (Rajendra Chola III died 1279). The Northwest[edit] The Mauryan Empire, during the 2nd century BC, became a collage of regional powers with overlapping boundaries. The invading tribes were influenced by Buddhism which continued to flourish under the patronage of both the invaders and the Satavahanas and Guptas and provides a cultural bridge between the two cultures. The Indo-Scythian Sakas[edit] The Indo-Greeks[edit] The Yavanas[edit] The Yavanas or Yonas were described as living beyond Gandhara. The Indo-Parthians[edit] The Pahlavas[edit] The Kushans[edit]

Indus Civilization Introduction n fact, there seems to have been another large river which ran parallel and west of the Indus in the third and fourth millenium BCE. This was the ancient Saraswati-Ghaggar-Hakra River (which some scholars associate with the Saraswati River of the Rg Veda). Its lost banks are slowly being traced by researchers. Along its now dry bed, archaeologists are discovering a whole new set of ancient towns and cities. Meluhha Ancient Mesopotamian texts speak of trading with at least two seafaring civilizations - Magan and Meluhha - in the neighborhood of South Asia in the third millennium B.C. This site tells the story of the ancient Indus Civilization through the words and photographs of the world's leading scholars in the US, Europe, India and Pakistan. HARP and Indian excavations Since 1986, the joint Pakistani American Harappa Archaeological Research Project (HARP) has been carrying out the first major excavations at the site since before independence in 1946. Harappa.com II.

Indian Fairs and Festivals History of India The history of India begins with evidence of human activity of Homo sapiens, as long as 75,000 years ago, or with earlier hominids including Homo erectus from about 500,000 years ago.[1] The Indus Valley Civilization, which spread and flourished in the northwestern part of the Indian subcontinent from c. 3300 to 1300 BCE in present-day Pakistan and northwest India, was the first major civilization in South Asia.[2] A sophisticated and technologically advanced urban culture developed in the Mature Harappan period, from 2600 to 1900 BCE.[3] This civilization collapsed at the start of the second millennium BCE and was later followed by the Iron Age Vedic Civilization, which extended over much of the Indo-Gangetic plain and which witness the rise of major polities known as the Mahajanapadas. In one of these kingdoms, Magadha, Mahavira and Gautama Buddha were born in the 6th or 5th century BCE and propagated their Shramanic philosophies. Prehistoric era[edit] Stone Age[edit] Bronze Age[edit]