What Will Donald Trump’s Asia Policy Look Like? WASHINGTON, D.C. – “I’ll tell you what I’ve told the diplomats: we’re serious about what we said [and] flexible about how we do things too,” a source close to President-elect Donald Trump told The Diplomat early Wednesday morning in response to inquiries about his Asia policy following his stunning victory over Hillary Clinton just a few hours earlier. 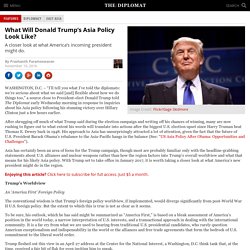 After shrugging off much of what Trump said during the election campaign and writing off his chances of winning, many are now rushing to figure out to what extent his words will translate into actions after the biggest U.S. election upset since Harry Truman beat Thomas E. Dewey back in 1948. His approach to Asia has unsurprisingly attracted a lot of attention, given the fact that the future of U.S. President Barack Obama’s rebalance to the Asia-Pacific hangs in the balance (See: “US Asia Policy After Obama: Opportunities and Challenges”). Enjoying this article? Trump’s Worldview An ‘America First’ Foreign Policy Trump the Pragmatist? “Mr. Policy Horizons Canada : Our Insights : Page 1. Canada-Asia News Service. Canada Needs to Also Make the Pivot To Asia. Canada has been slow to recognize the importance of developing strong economic and political relations with Southeast Asian nations. 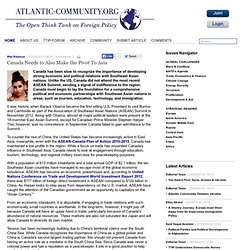 Unlike the US, Canada did not attend the most recent ASEAN Summit, sending a signal of indifference to the region. Canada must begin to lay the foundation for a comprehensive political and economic partnerships with Southeast Asian nations in areas, such as tourism, education, technology, and immigration. It was historic when Barack Obama became the first sitting U.S. President to visit Burma and Cambodia as part of the Association of Southeast Asian Nations (ASEAN) Summit in November 2012. Along with Obama, almost all major political leaders were present at the 18-member East Asian Summit, except for Canadian Prime Minister Stephen Harper.

To counter the rise of China, the United States has become increasingly active in East Asia, meanwhile, even with the ASEAN-Canada Plan of Action 2010-2015, Canada has maintained a low profile in the region. Asian Economy, Political and Security Outlook: New View of Asia Chartbook. Introduction: A New View of America's "Near West" At The Heritage Foundation’s annual B. 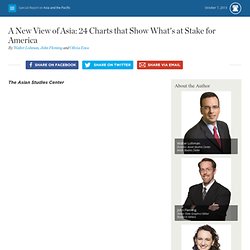 C. Lee Lecture this year, the Chairman of the House Committee on Foreign Affairs summed up perfectly America’s destiny as regards Asia: It is America’s “Near West.” It is hardly the “Far East.” It is not to our east, and in this day and age, it is not really very “far.” America’s relationship with Asia is long by the standards of our young nation. The stakes involved in recognizing America’s status as a Pacific nation have never been greater. Asia is home to the world's largest and fastest-growing economies and several of the most economically free nations in the world. There is also a dark side. A Wake-Up Call For Asia. Series Overview. Asia Has World’s Biggest Pay Gap, Study Finds.

As Asia rises, new challenges emerge. Author: Barry Desker, RSIS Analysts of global trends can easily get caught up in the hype of the rise of Asia. 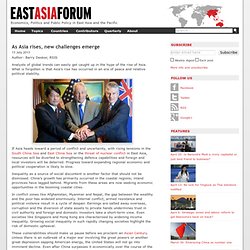 What is forgotten is that Asia’s rise has occurred in an era of peace and relative political stability. If Asia heads toward a period of conflict and uncertainty, with rising tensions in the South China Sea and East China Sea or the threat of nuclear conflict in East Asia, resources will be diverted to strengthening defence capabilities and foreign and local investors will be deterred. Progress toward expanding regional economic and political cooperation is likely to slow. Inequality as a source of social discontent is another factor that should not be dismissed. In conflict zones like Afghanistan, Myanmar and Nepal, the gap between the wealthy and the poor has widened enormously.

These vulnerabilities should make us pause before we proclaim an Asian Century. Although Asian hard power is increasing, especially on economic issues, the West is subtly able to shape global agendas.