Mark Smith in Thazi, Burma. In an almost unknown country, on an obscure branch line, I had one of the most satisfying train journeys ever. 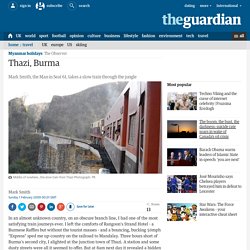 I left the comforts of Rangoon's Strand Hotel - a Burmese Raffles but without the tourist masses - and a bouncing, bucking 50mph "Express" sped me up-country on the railroad to Mandalay. Three hours short of Burma's second city, I alighted at the junction town of Thazi. A station and some dusty streets were all it seemed to offer. But at 8am next day it revealed a hidden gem: the slow train from Thazi, a day-long meander through the hills to Shwenyaung, the railhead for beautiful Inle Lake. 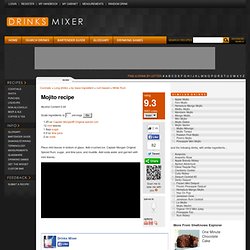 Lime indeed posted by tina @ 08:27PM, 5/13/06. Forgotten treasures. Years of Burmese isolation have left Rangoon with streets of perfectly preserved colonial buildings, but just as the tourists begin to return, the city’s rich architectural heritage is coming under threat In March 1889, on his way from Calcutta to San Francisco, Rudyard Kipling spent his one and only evening in Rangoon at the Pegu Club, then the exclusive haunt of British high officials and army men. 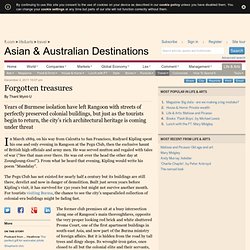 He was served mutton and regaled with tales of war (“See that man over there. He was cut over the head the other day at Zoungloung-Goo!”). From what he heard that evening, Kipling would write his poem “Mandalay”. Travels along the Mekong and other stories. Kinabalu Climb - Day 2 - Climbing Mt Kinabalu in Sabah, Malaysia. Let the fun begin After seemingly endless flights of stairs and clambering up the rocky trail, climbers emerge on to a small rocky plateau that marks the end of the treeline and the beginning of the open rockface. 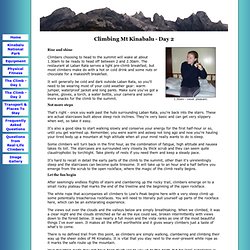 The white rope that accompanies all climbers to Low's Peak begins here with a very steep climb up some potentially treacherous rockfaces. You will need to literally pull yourself up parts of the rockface here, which can be an exhilarating experience. The views out over the clouds and the valleys below are simply breathtaking. When we climbed, it was a clear night and the clouds stretched as far as the eye could see, broken intermittently with views down to the forest below. There is no defined trail from this point, as climbers are simply walking, clambering and climbing their way up the sheer sides of Mt Kinabalu. Your mountain guide may not have been much use to you up to this point, but his local experience is invaluable at this point. Everest Base Camp Trek. This article is an itinerary. 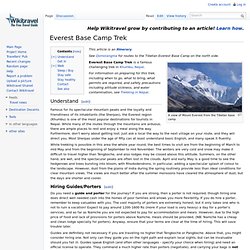 See Qomolangma for routes to the Tibetan Everest Base Camp on the north side. South east asia one month - Lonely Planet travel forum. Backpacking travel guide for Southeast Asia. Travelfish.org.

BootsnAll Indie Travel. The world's largest and most populous continent, Asia is a region of rich diversity and splendor. 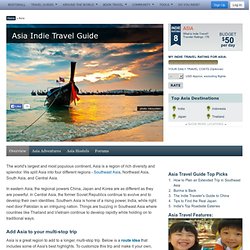 We split Asia into four different regions - Southeast Asia, Northeast Asia, South Asia, and Central Asia. In eastern Asia, the regional powers China, Japan and Korea are as different as they are powerful. In Central Asia, the former Soviet Republics continue to evolve and to develop their own identities. Southern Asia is home of a rising power, India, while right next door Pakistan is an intriguing nation. Things are buzzing in Southeast Asia where countries like Thailand and Vietnam continue to develop rapidly while holding on to traditional ways.

Add Asia to your multi-stop trip Asia is a great region to add to a longer, multi-stop trip. Asia Pillars Trying to narrow down where to go in massive continent like Asia can be challenging, so we've chosen a handful of highlights, or pillars, for each region. Southeast Asia The food in Southeast Asia is some of the best in the world. Transportation. Blue Ocean Resort, a hotel featured by Kuoni for Phan Thiet. Set on Mui Ne beach, at the heart of Mui Ne’s shopping and dining opportunities. 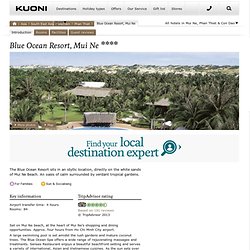 Approx. four hours from Ho Chi Minh City airport. A large swimming pool is set amidst the lush gardens and mature coconut trees. The Blue Ocean Spa offers a wide range of rejuvenating massages and treatments. Senses Restaurant enjoys a beautiful beachfront setting and serves a variety of international, Asian and Vietnamese cuisines. As the sun sets over the South China Sea, head to the Lobby Lounge Bar for a relaxing drink with friends.