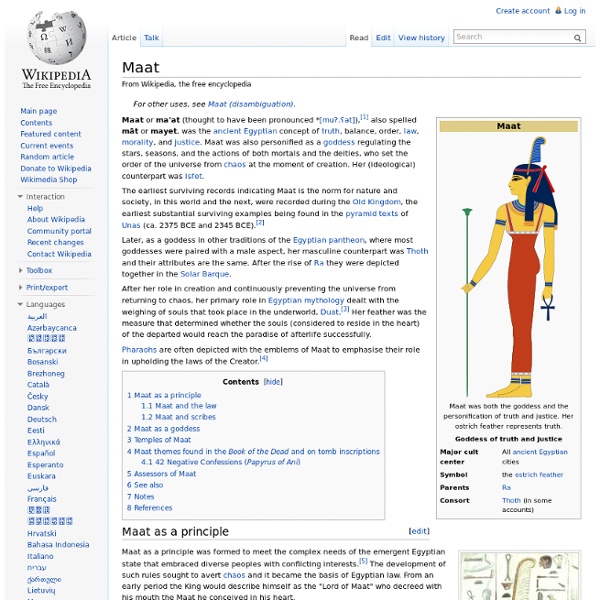 The earliest surviving records indicating Maat is the norm for nature and society, in this world and the next, were recorded during the Old Kingdom, the earliest substantial surviving examples being found in the Pyramid Texts of Unas (ca. 2375 BCE and 2345 BCE).[2] Later, as a goddess in other traditions of the Egyptian pantheon, where most goddesses were paired with a male aspect, her masculine counterpart was Thoth and their attributes are the same. After the rise of Ra they were depicted together in the Solar Barque. After her role in creation and continuously preventing the universe from returning to chaos, her primary role in Egyptian mythology dealt with the weighing of souls that took place in the underworld, Duat.[3] Her feather was the measure that determined whether the souls (considered to reside in the heart) of the departed would reach the paradise of afterlife successfully. Maat as a principle[edit] Winged Maat Maat and the law[edit] Maat wearing feather of truth See also[edit]

Skin-walker In some Native American legends, a skin-walker is a person with the supernatural ability to turn into any animal he or she desires. To be able to transform, legend sometimes requires that the skin-walker wears a pelt of the animal, though this is not always considered necessary. Similar lore can be found in cultures throughout the world and is often referred to as shapeshifting by anthropologists. [ edit ] Possibly the best documented skinwalker beliefs are those relating to the Navajo yee naaldlooshii (literally "with it, he goes on all fours" in the Navajo language ). A yee naaldlooshii is one of several varieties of Navajo witch (specifically an ’ánt’įįhnii or practitioner of the Witchery Way, as opposed to a user of curse-objects ( ’adagąsh ) or a practitioner of Frenzy Way ( ’azhįtee )).

Nile River in Africa and the longest river in the world The Nile (Arabic: النيل‎, written as al-Nīl; pronounced as an-Nīl[needs Arabic IPA]) is a major north-flowing river in northeastern Africa, and is the longest river in Africa and the disputed longest river in the world,[2][3] as the Brazilian government says that the Amazon River is longer than the Nile.[4][5] The Nile, which is about 6,650 km (4,130 mi)[n 1] long, is an "international" river as its drainage basin covers eleven countries: Tanzania, Uganda, Rwanda, Burundi, the Democratic Republic of the Congo, Kenya, Ethiopia, Eritrea, South Sudan, Republic of the Sudan, and Egypt.[7] In particular, the Nile is the primary water source of Egypt and Sudan.[8] The Nile has two major tributaries – the White Nile and the Blue Nile. The White Nile is considered to be the headwaters and primary stream of the Nile itself.

Ancient Egyptian Gods Pharaohs also practiced this god’s concept of order during their reign. Pharaohs were expected to practice Ma’at, which meant it was their job to keep their nation in a state of order. This meant building temples, making offerings to the gods, keeping enemies at bay, and making honest decisions. Anything else was considered chaos and disorder. The people of Egypt believed that through Ma’at, the pharaoh kept Egypt stable and orderly. Witch (Navajo) There are a number of traditions and beliefs in Navajo culture relating to practices which are referred to as " witchcraft " in English. In the Navajo language , they are each referred to distinctly, and are regarded as separate, albeit related, phenomena. The practices lumped together in the category 'witchcraft' are very similar, at least in their externals, to the rituals practiced on the 'good side' of Navajo tradition, the ceremonials or 'sings'. The difference, however, is that while the good sings are to heal or bring luck, the bad ones are intended to hurt and curse. Similarly, all kinds of witches are associated with transgression of taboos and societal standards, especially those relating to family and the dead.

Diodorus Siculus Diodorus Siculus (; Koinē Greek: Διόδωρος Σικελιώτης Diodoros Sikeliotes) (fl. 1st century BCE) or Diodorus of Sicily was an ancient Greek historian. He is known for writing the monumental universal history Bibliotheca historica, much of which survives, between 60 and 30 BCE. It is arranged in three parts. The first covers mythic history up to the destruction of Troy, arranged geographically, describing regions around the world from Egypt, India and Arabia to Europe. The second covers the Trojan War to the death of Alexander the Great.

Art: Information on Navajo Culture The Navajo live in the Four Corners area of the American southwest. This is the junction of northeast Arizona, southeast Utah, northwest New Mexico, and southwest Colorado. (There is a marker at the point where one can stand and simultaneously be in four different states.) Marker at Four Corners (circa 1908)Facing Northwest from New Mexico According to Navajo legend, their land is enclosed by four sacred mountains and two sacred rivers. Osiris God of the afterlife in Egyptian mythology Osiris was the judge of the dead and the underworld agency that granted all life, including sprouting vegetation and the fertile flooding of the Nile River. He was described as "He Who is Permanently Benign and Youthful"[12] and the "Lord of Silence".[13] The Kings of Egypt were associated with Osiris in death – as Osiris rose from the dead so they would be in union with him, and inherit eternal life through a process of imitative magic.[14] Etymology of the name[edit] Osiris is a Latin transliteration of the Ancient Greek Ὄσιρις IPA: [ó.siː.ris], which in turn is the Greek adaptation of the original name in the Egyptian language.

The Ancient Egyptian Concept of the Soul By Caroline Seawright To the Ancient Egyptians, their soul, their being, were made up of many different parts. Not only was there the physical form, but there were eight immortal or semi-divine parts that survived death, with the body making nine parts of a human.