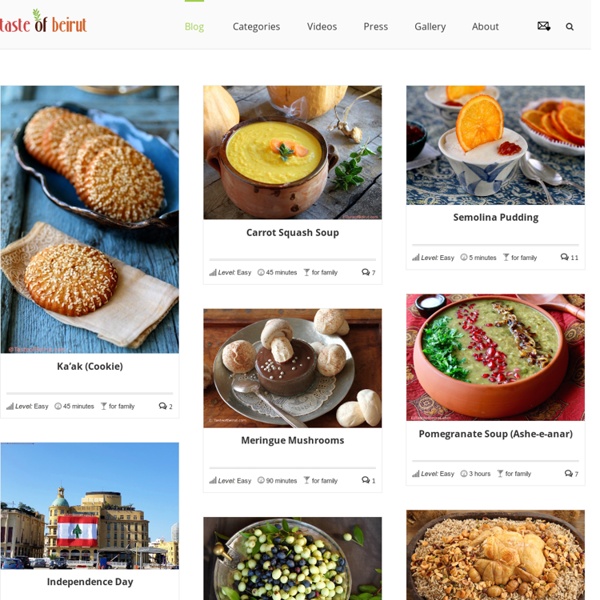 Lebanese cuisine An array of grilled Lebanese cuisine. Most often foods are either grilled, baked or sautéed in olive oil; butter or cream is rarely used other than in a few desserts. Vegetables are often eaten raw or pickled as well as cooked. Herbs and spices are used and the freshness of ingredients is important. In Lebanon, very rarely are drinks served without being accompanied by food. Although simple fresh fruits are often served towards the end of a Lebanese meal, there is also dessert, such as baklava and coffee. A typical mezze will consist of an elaborate variety of thirty hot and cold dishes and may include: Salads such as the tabbouleh and fattoush, together with dip such as hummus, baba ghanoush or moutabal, and kebbeh.Some patties such as the Sambusac.Stuffed grape leaves Family cuisine offers also a range of dishes, such as stews or yakhnehs, which can be cooked in many forms depending on the ingredients used and are usually served with meat and rice vermicelli. Lebanese sweets include:

Good Wine Under $20 Haniela's: How To Make Farmer's Cheese Farmer's Cheese is a dairy product, some call it curd cheese in the US. If you never had this cheese I'd say it's a cross between ricotta and cottage cheese. Ricotta cheese is made from whey and Farmer's cheese is made from cow's milk. They are very similar to each other but I personally find Farmer's cheese creamier. In Slovakia this cheese is like bread. Today I made my own Farmer's cheese using only few very common kitchen ingredients. Homemade Farmer's Cheese (makes about 4 cups of cheese) VIDEO TUTORIAL 3 quarts(3liters) Whole Milk ( don't use low fat or fat free milk, it produces leathery texture) 10 1/2 tbl. 1/2 tsp Salt candy thermometer Fine Mesh Sieve Homemade Buttermilk: into the 1cup (240ml)measure pour 1/2 tbl vinegar add milk to fill the cup. You can also make a delicious smoothie using Farmer's cheese, using your blender a touch of milk, honey.. blend away and ...here you have it a perfectly healthy treat :

SheSimmers | Thai Home Cooking 2011 » Pete Drinks One of my big beer obsessions is exploring the ever growing London brewing scene; the London Brewers page I maintain here isn’t so much a public service as a ‘to drink’ list. Here, we pay our first visit to a brewpub – specifically, the Bull in Highgate which has the added benefit of being the brewery geographically closest to my house! The Bull has been there for a very long time, but it’s only a matter of months since Dan Fox took the place over, refurbished it into a stylish space and somehow managed to cram a small, 2.5 barrel brewery – the London Brewing Company – into the corner of the kitchen. Ok, so it’s not going to put Fullers out of business any time soon but despite the size they aim to keep four of their own brews on tap at any one time. They also manage to sell one of the more impressive collection of craft beer from around the world – draft and bottled – that I’ve come across in a pub. Beer Street is their 4.0% Best Bitter. Golden Mean is a lighter in both senses, at 3.7%.

Tips for Tiny House Living You might remember when I posted about when I visited a friend who lived in an even tinier house than mine? That friend, Cara, shared this lovely guest post with her reasons behind living in a tiny house, and how she and her husband make it work. Though most people don't live in a house as small as hers, and wouldn't even consider it, these tips are worthwhile for anyone who is interested in downsizing their home, and how to make the best use of less space. My husband and I have been married for two years and three months. We've never lived in a big house—nor do we want to, for a variety of reasons. First of all, we are both slightly nervous in wide-open spaces and prefer the comfort of walls around us. Our first apartment—which was in the suburbs, actually in the same little town where Penny's husband grew up—was 183 square feet. Fortunately, we moved out of there and back into the city around six months later. Here's how we make it work: -Use the space on the walls!