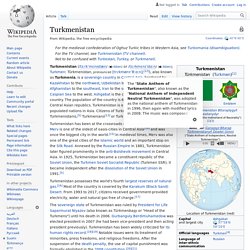 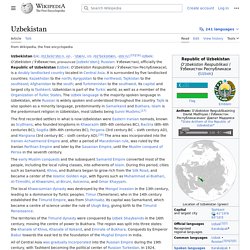 It is a unitary, constitutional, presidential republic, comprising 12 provinces, 1 autonomous republic, and 1 capital city. Uzbekistan is bordered by five countries: Kazakhstan and the Aral Sea to the north; Tajikistan to the southeast; Kyrgyzstan to the northeast; Afghanistan to the south; and Turkmenistan to the southwest. Once part of the Turkic Khaganate and later Timurid Empires, the region that today includes the Republic of Uzbekistan was conquered in the early 16th century by Eastern Turkic-speaking nomads. Uzbekistan is officially a democratic,[13] secular, unitary, constitutional republic with a diverse cultural heritage. Uzbekistan's economy relies mainly on commodity production, including cotton, gold, uranium, and natural gas.

Geography[edit] Environment[edit] Tajikistan. Landlocked republic in Central Asia Coordinates: 39°N 71°E / 39°N 71°E / 39; 71 Tajikistan (, ; Tajik: Тоҷикистон, [tɔdʒikisˈtɔn], Russian: Таджикистан, romanized: Tadzhikistan), officially the Republic of Tajikistan (Tajik: Ҷумҳурии Тоҷикистон, romanized: Jumhurii Tojikiston), is a landlocked country in Central Asia with an area of 143,100 km2 (55,300 sq mi)[5][6][7] and an estimated population of 9,537,645 people.[14] It is bordered by Afghanistan to the south, Uzbekistan to the west, Kyrgyzstan to the north and China to the east. 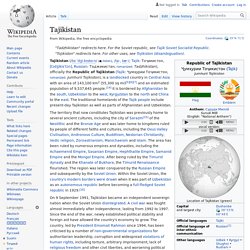 The traditional homelands of the Tajik people include present-day Tajikistan as well as parts of Afghanistan and Uzbekistan. On 9 September 1991, Tajikistan became an independent sovereign nation when the Soviet Union disintegrated. A civil war was fought almost immediately after independence, lasting from 1992 to 1997. Tajikistan is a presidential republic consisting of four provinces. Etymology[edit] Kyrgyzstan. Country in Central Asia Coordinates: 41°N 75°E / 41°N 75°E / 41; 75 Kyrgyzstan,[A] officially the Kyrgyz Republic,[B] also known as Kirghizia (in Russian),[C] is a landlocked country in Central Asia. 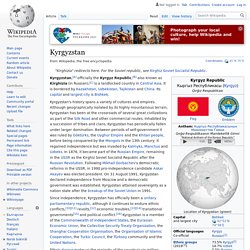 It is bordered by Kazakhstan, Uzbekistan, Tajikistan and China. Its capital and largest city is Bishkek. Kyrgyzstan's history spans a variety of cultures and empires. Kazakhstan. Country in Central Asia Kazakhstan is the world's largest landlocked country, and the ninth-largest country in the world. 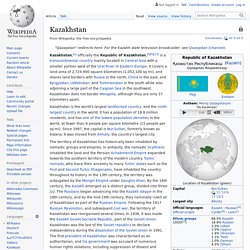 It has a population of 18.8 million residents, and has one of the lowest population densities in the world, at fewer than 6 people per square kilometre (15 people per sq mi). Since 1997, the capital is Nur-Sultan, formerly known as Astana. It was moved from Almaty, the country's largest city. The territory of Kazakhstan has historically been inhabited by nomadic groups and empires.

Central Asia, wikipedia. Region of the Asian continent Central Asia is a region in Asia which stretches from the Caspian Sea in the west to China and Mongolia in the east, and from Afghanistan and Iran in the south to Russia in the north. 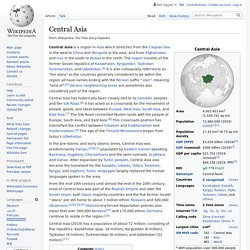 The region consists of the former Soviet republics of Kazakhstan, Kyrgyzstan, Tajikistan, Turkmenistan, and Uzbekistan.[4] It is also colloquially referred to as "the stans" as the countries generally considered to be within the region all have names ending with the Persian suffix "-stan", meaning "land of".[5] Various neighbouring areas are sometimes also considered part of the region. In the pre-Islamic and early Islamic times, Central Asia was predominantly Iranian,[10][11] populated by Eastern Iranian-speaking Bactrians, Sogdians, Chorasmians and the semi-nomadic Scythians and Dahae. Definitions[edit] Political map of Central Asia (2000) Expanded definition of Central Asia. Geography[edit] Much of the land of Central Asia is too dry or too rugged for farming.