The US - Central Asia: Why

The War in Afghanistan: The legacy of Brzezinski. Axis of the axis: Turkmen/Afghan Highways. A satellite image of the Pakistan-Afghanistan-Iran-Turkmenistan "axis" from Google. 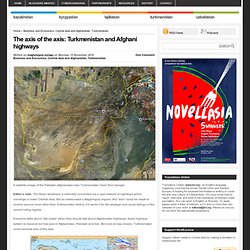 Editor’s note: The Asian landmass is internally connected via a vast network of highways which converge in lower Central Asia. But as neweurasia’s Magtymguly argues, this “axis” could be made to revolve around none other than Turkmenistan–that is, if it weren’t for the strategic and moral failings of the current ruling regime. Everyone talks about “silk roads” when they should talk about Afghanistan highways. Asian highway system is massive but has axis in Afghanistan, Pakistan and Iran. Ouster of UNOCAL. By Bill Sardi Testimony before the US Congress is circulating on the internet. 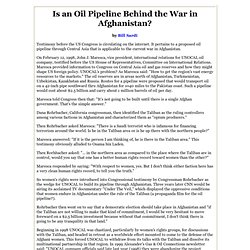 It pertains to a proposed oil pipeline through Central Asia that is applicable to the current war in Afghanistan. On February 12, 1998, John J. US attack closes US project. By William Reeve in Kandahar An American-funded training project in Afghanistan has closed down as a result of the US cruise missile attack on the country in August. 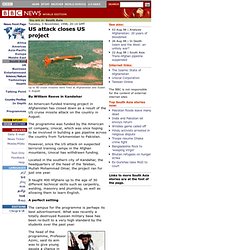 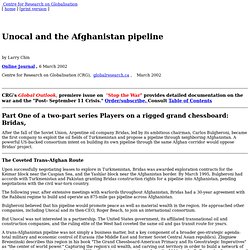 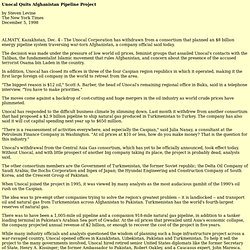 The decision was made under the pressure of low world oil prices, feminist groups that assailed Unocal's contacts with the Taliban, the fundamentalist Islamic movement that rules Afghanistan, and concern about the presence of the accused terrorist Osama bin Laden in the country. In addition, Unocal has closed its offices in three of the four Caspian region republics in which it operated, making it the first large foreign oil company in the world to retreat from the area. "The biggest reason is $12 oil," Scott A. George Monbiot: America's pipe dream. "Is there any man, is there any woman, let me say any child here," Woodrow Wilson asked a year after the first world war ended, "that does not know that the seed of war in the modern world is industrial and commercial rivalry? 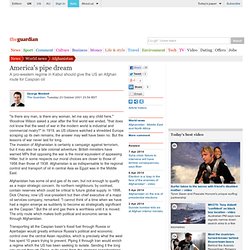 " In 1919, as US citizens watched a shredded Europe scraping up its own remains, the answer may well have been no. But the lessons of war never last for long. The invasion of Afghanistan is certainly a campaign against terrorism, but it may also be a late colonial adventure. British ministers have warned MPs that opposing the war is the moral equivalent of appeasing Hitler, but in some respects our moral choices are closer to those of 1956 than those of 1938. Unocal and Bridas Woo the Taliban for Oil Pipeline Project. Congress: U.S. Interests in Central Asian Republics. 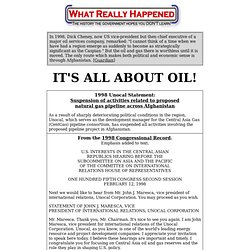 Emphasis added to text. Next we would like to hear from Mr. John J. Maresca, vice president of international relations, Unocal Corporation. You may proceed as you wish. Mr. I would like to focus today on three issues. Mr. One major problem has yet to be resolved: how to get the region's vast energy resources to the markets where they are needed. Because the region's pipelines were constructed during the Moscow-centered Soviet period, they tend to head north and west toward Russia.

Two major infrastructure projects are seeking to meet the need for additional export capacity. The other project is sponsored by the Azerbaijan International Operating Company, a consortium of 11 foreign oil companies, including four American companies, Unocal, Amoco, Exxon and Pennzoil. Special Report. Clinton defends military strikes. President Clinton has defended his decision to order attacks against targets in Sudan and Afghanistan, but the countries concerned have reacted with anger. 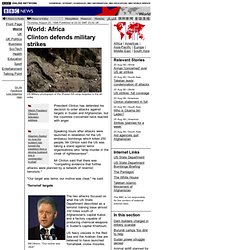 Speaking hours after attacks were launched in retaliation for the US embassy bombings which killed 250 people, Mr Clinton said the US was taking a stand against terror organisations who "wrap murder in the cloak of righteousness". Mr Clinton said that there was "compelling evidence that further attacks were planned by a network of Islamist terrorists. " "Our target was terror, our motive was clear," he said. 'Terrorist' targets The two attacks focused on what the US State Department described as a terrorist training base almost 100 miles south of Afghanistan's capital Kabul, and a factory capable of producing chemical weapons in Sudan's capital Khartoum. 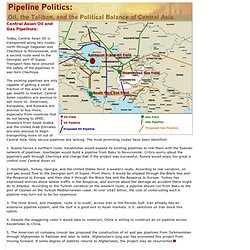 Transport fees have ensured the safety of the pipelines in war-torn Chechnya. The existing pipelines are only capable of getting a small fraction of the area's oil and gas wealth to market. Central Asian republics are anxious to sell more oil. Americans, Europeans, and Russians are anxious to buy more, especially from countries that do not belong to OPEC. 1. 2. 3. 4. Where America meets central Asia, China, Russia, Iran, Afghanistan, Baluchistan and (oh, yes) Pakistan. This analytic essay is not precisely theoretical, but it bears on some of our discussions concerning imperialist strategy and the ways in which the contemporary world is shaping up (or being shaped). 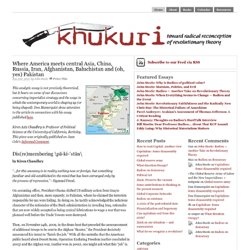 Don Hamerquist drew attention to the article in connection with his essay published here . Kiren Aziz Chaudhry is Professor of Political Science at the University of California, Berkeley. This piece was originally published on Juan Cole’s Informed Comment . by Kiren Chaudhry “ …for this uncanny is in reality nothing new or foreign, but something familiar and old-established in the mind that has been estranged only by the process of repression. ”– Sigmund Freud. On assuming office, President Obama shifted US military action from Iraq to Afghanistan and then, more squarely, to Pakistan, where he claimed the terrorists responsible for 911 were hiding.

To make Americans believe that this is still a war against Al-Qaida is disturbingly easy. Central Asia gas deal signed. The presidents of Pakistan, Afghanistan and Turkmenistan have signed an agreement to tap Central Asia's huge gas reserves. The three leaders - Pakistani President Musharraf, interim Afghan leader Hamid Karzai and Turkmen President Niyazov - agreed on the construction of a $2bn pipeline to bring gas from Turkmenistan across Afghanistan to Pakistan.

The idea for such a pipeline has existed for a number of years - but the main stumbling block has been the situation in Afghanistan. The US company Unocal led a consortium in the 1990s which undertook feasibility studies, but it pulled out of the project in 1998. Chennai Centre for China Studies » Chinese Presence In Balochistan & Northern Areas. As appeared in www.saag.org In my paper of May 17, 2006, titled Baloch Freedom Fighters Attack Nuclear Establishment” , I had reported as follows: “The BLA (Balochistan Liberation Army) and other Baloch nationalist elements have also stepped up their campaign against the Chinese engineers and security officials posted in Gwadar in connection with the project for the construction of the Gwadar port. A team of Chinese engineers recently visited Balochistan amidst tight security to carry out a preliminary study on the possibility of the construction of a road linking Gwadar with the Karakoram Highway in the Northern Areas, which is being upgraded, and an oil/gas pipeline connecting Gwadar with Xinjiang.

Chennai Centre for China Studies » China’s Painful Toehold In The Arabian Sea. As appeared in www.saag.org Chinese nationals working in the tribal areas of Pakistan have been the targets of three attacks in the last two years. Two of these took place in Balochistan in May,2004, and February,2006, and the third in South Waziristan in October,2004. Seven Chinese engineers were killed and nine injured in these incidents. The serious Chinese concern over the failure of the Pakistani authorities to put an end to the repeated attacks on Chinese nationals was evident in a dispatch of the Xinhua news agency of February 16,2006. It said: “China has announced that it will not evacuate engineers and technicians from Pakistan after three Chinese engineers were shot dead in Pakistan on Wednesday.

The Geopolitics of Oil in Central Asia

9/11 Attack on America: the Energy Connection. September 11th - The Energy Connection So where do we start? There’s two thing that are key to understanding what's going on behind this flimsy curtain. Chevron made a historic deal with Kazakhstan to develop the oil and gas fields in a Central Asian Country in 1993. Both Dick Cheney and Condoliza Rice have been instrumental in these dealings.

Home. 'Gwadar': Second Biggest Deep Sea Port of The World - - The Emerging Economical Hub of The Region. China's footprint in Pakistan. GWADAR, PAKISTAN — Along a scenic beach where fishermen mend their nets by hand, an endless row of storefronts stretches into the distance, all selling the same thing. Not sunscreen, umbrellas or cold drinks. Land. Never mind that the area is home to a violent separatist movement, or that foreigners are regarded with suspicion by police. A property boom has hit this formerly sleepy town in southwest Pakistan because of the latest addition to Gwadar's modest charms: a strategic new port on the Arabian Sea, almost all of it paid for by China. The deepwater port has the potential to become a major shipping hub for Central Asia and China, particularly for the oil that China is sucking up to fuel its explosive growth.