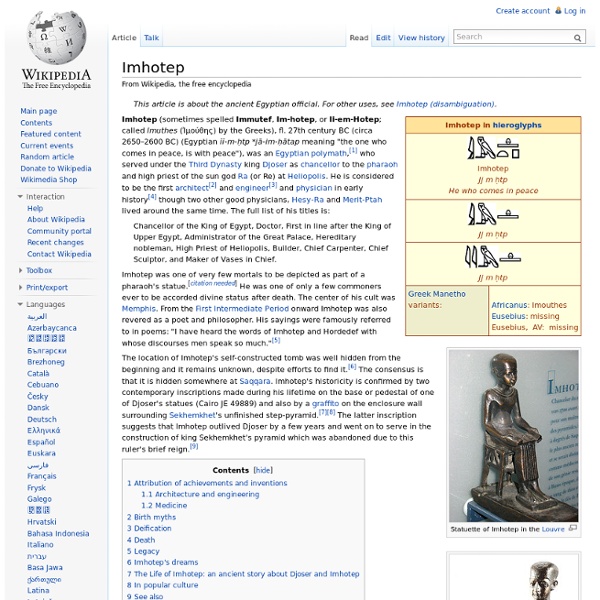 Statuette of Imhotep in the Louvre Chancellor of the King of Egypt, Doctor, First in line after the King of Upper Egypt, Administrator of the Great Palace, Hereditary nobleman, High Priest of Heliopolis, Builder, Chief Carpenter, Chief Sculptor, and Maker of Vases in Chief. He was one of only a few commoners ever to be accorded divine status after death. The center of his cult was Memphis. From the First Intermediate Period onward Imhotep was also revered as a poet and philosopher. Attribution of achievements and inventions[edit] Architecture and engineering[edit] Pyramid of Djoser Medicine[edit] Imhotep was an important figure in Ancient Egyptian medicine. Descriptions of Imhotep by James Henry Breasted et al "In priestly wisdom, in magic, in the formulation of wise proverbs; in medicine and architecture; this remarkable figure of Zoser's reign left so notable a reputation that his name was never forgotten. 'Imhotep extracted medicine from plants.' Deification[edit] Birth myths[edit]

Franck Goddio: Projects: Sunken civilizations: Heracleion With a unique survey-based approach that utilises the most sophisticated technical equipment, Franck Goddio and his team, in cooperation with the Egyptian Supreme Council of Antiquities, were able to locate, map and excavate parts of the city of Thonis-Heracleion, which lies 6.5 kilometres off today’s coastline. The city is located within an overall research area of 11 by 15 kilometres in the western part of Aboukir Bay at a depth of approx. 10 metres. Research started in 1996. It took years to map the entire area. The objects recovered from the excavations illustrate the cities’ beauty and glory, the magnificence of their grand temples and the abundance of historic evidence: colossal statues, inscriptions and architectural elements, jewellery and coins, ritual objects and ceramics - a civilization frozen in time. The port of Thonis-Heracleion had numerous large basins and functioned as a hub of international trade.

Crystalinks Home Page Wondjina In Aboriginal mythology, the Wondjina (or Wandjina) were cloud and rain spirits who, during the Dream time, created or influenced the landscape and its inhabitants.[1] When they found the place they would die, they painted their images on cave walls and entered a nearby waterhole. The Wondjina style dates from around 3800 B.P., following the end of a millennium long drought that gave way to a wetter climate characterised by regular monsoons.[2] Today, certain Aboriginal people of the Mowanjum tribes repaint the images to ensure the continuity of the Wondjina's presence.[3] Annual repainting in December or January also ensures the arrival of the monsoon rains, according to Mowanjum belief.[4] Repainting has occurred so often that at one site the paint is over 40 layers deep. The painting style evolves during this process: the figures of recent years are stockier and some now possess eyelashes.[5] In 2007, graffiti depictions of Wandjina appeared in Perth, Western Australia.

Types of Human Memory Memory is the retention of information over time. Although the word memory may conjure up an image of a singular, “all-or-none” process, it is clear that there are actually many kinds of memory, each of which may be somewhat independent of the others. One way to describe memory is by reference to the form it takes, that is, the different ways memory may be assessed: recall, recognition, and paired associates. The most popularly studied kind of memory is recall. A second type of memory is recognition, which is generally easier than recall, for example a history teacher gives four dates and learners are to choose the one that goes with the specific historical event. People often underestimate just how powerful their recognition memory is. Another kind of memory is called paired associates. Memory as the Flow of Information One prominent view conceives of memory as the flow of information through the mind. The distinction between short-term memory and working memory is an ongoing debate.

Minoan civilization Map of Minoan Crete The Minoan civilization was an Aegean Bronze Age civilization that arose on the island of Crete and flourished from approximately the 27th century BC to the 15th century BC.[1] It was rediscovered at the beginning of the 20th century through the work of British archaeologist Arthur Evans. Will Durant referred to it as "the first link in the European chain."[2] The early inhabitants of Crete settled as early as 128,000 BC, during the Middle Paleolithic age.[3][4] It was not until 5000 BC that the first signs of advanced agriculture appeared, marking the beginning of civilization. Overview[edit] The term "Minoan" was coined by Arthur Evans after the mythic "king" Minos.[5] Minos was associated in Greek myth with the labyrinth, which Evans identified with the site at Knossos. Chronology and history[edit] Rather than associate absolute calendar dates for the Minoan period, archaeologists use two systems of relative chronology. History[edit] Geography[edit]

Hor-Aha Hor-Aha (or Aha or Horus Aha) is considered the second pharaoh of the first dynasty of ancient Egypt in current Egyptology. He lived around the thirty-first century BC and is thought to have had a long reign. Identity[edit] Name[edit] The commonly-used name Hor-Aha is a rendering of the pharaoh's Horus-name, an element of the royal titulary associated with the god Horus, and is more fully given as Horus-Aha meaning Horus the Fighter.[1] For the Early Dynastic Period, the archaeological record refers to the pharaohs by their Horus-names, while the historical record, as evidenced in the Turin and Abydos king lists, uses an alternative royal titulary, the nebty-name.[1][2] The different titular elements of a pharaoh's name were often used in isolation, for brevity's sake, although the choice varied according to circumstance and period.[2] Inscription bearing Hor-Aha's serekh together with a Nebty-name expressed with the game-board hieroglyph, which could be read mn. Theories[edit] Reign[edit]

Types of Memory What we usually think of as “memory” in day-to-day usage is actually long-term memory, but there are also important short-term and sensory memory processes, which must be worked through before a long-term memory can be established. The different types of memory each have their own particular mode of operation, but they all cooperate in the process of memorization, and can be seen as three necessary steps in forming a lasting memory. This model of memory as a sequence of three stages, from sensory to short-term to long-term memory, rather than as a unitary process, is known as the modal or multi-store or Atkinson-Shiffrin model, after Richard Atkinson and Richard Shiffrin who developed it in 1968, and it remains the most popular model for studying memory. It is often also described as the process of memory, but I have used this description for the processes of encoding, consolidation, storage and recall in the separate Memory Processes section. In this section: