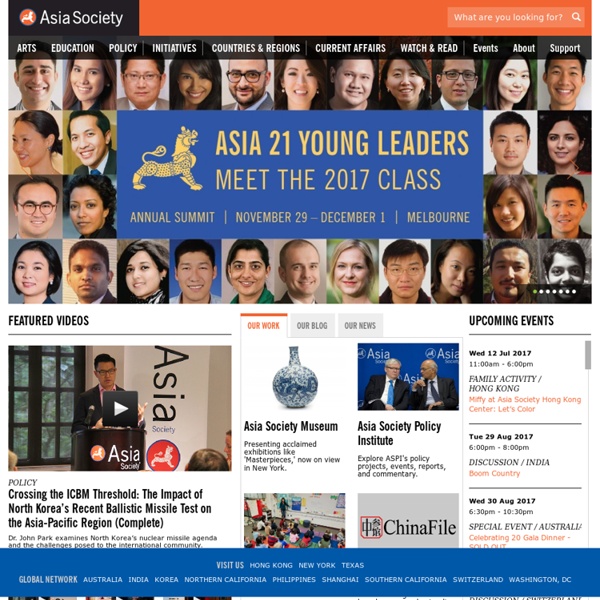 5 Minute Introduction • What is Buddhism? Buddhism is a religion to about 300 million people around the world. The word comes from 'budhi', 'to awaken'. It has its origins about 2,500 years ago when Siddhartha Gotama, known as the Buddha, was himself awakened (enlightened) at the age of 35. • Is Buddhism a Religion? SPY FOR CHINA FOUND SUFFOCATED IN PRISON, APPARENTLY A SUICIDE WASHINGTON, Feb. 21— Larry Wu-Tai Chin, the retired analyst for the Central Intelligence Agency convicted of spying for the Chinese for 30 years, was found dead this morning in his jail cell, apparently a suicide, the authorities said. Stephan Kaftan, superintendent of the Prince William-Manassas Regional Adult Detention Center in suburban Virginia, said Mr. Chin appeared to have suffocated himself with a brown plastic trash bag. It was sealed with shoe laces taken from a pair of high-top sneakers that Mr. Chin kept in his cell.

Hofstede « Notes on Intercultural Communication Organizational Culture as a Root of Performance Improvement (Organizational Culture as a Root of Performance Improvement:Research and Recommendations; R.C. Rose, Naresh Kumar, Haslinda Abdullah; Universiti Putra Malaysia – download pdf here). Map of Corporate Cultures Nation Branding in Pop-Culture Sources: (retrieved 22.11.2012) History 266: World History from the Renaissance to Imperialism Lecture Notes Developed by Lee M. Pappas and Nicholas C. J. Pappas Lecture 1: An Introduction to History. » Currie, Lauchlin Bernard (1902-1993) - DocumentsTalk.com Currie, Lauchlin Bernard (1902-1993) Lauchlin Currie A Canadian-born U.S. economist, whose pioneering work in the 1930s made a lasting impact on the theory and practice of macroeconomic stabilization. Currie was a top-level adviser in President Franklin D. Roosevelt’s New Deal and served as FDR’s economic adviser in the White House from 1939-1945. From 1949 until his death in 1993, he was a top-level development economist in Latin America.

Prof. John Paul Adams Department of Modern and Classical Languages and LiteraturesCollege of Humanities OFFICE HOURS: None. "Adding to the store of human knowledge ... is one of the noblest activities of a public University." - Lee Bollinger, President, Columbia University "Universities should be safe havens where ruthless examination of realities will not be distorted by the aim to please or inhibited by the risk of displeasure." - Kingman Brewster, Jr. (1919-1988) President, Yale University (1963-1977)

Amerasia Amerasia magazine was published in New York City from 1937 through 1947. Amerasia was a journal of Far Eastern affairs best known for the 1940s "Amerasia Affair" in which several of its staff and their contacts were suspected of espionage and charged with unauthorized possession of government documents. Publication[edit] Amerasia was founded by Frederick Vanderbilt Field, who also chaired the editorial board,[1] and Philip Jaffe, a naturalized American born in Russia.

Frank Coe - KeyWiki Frank Coe Virginius Frank Coe (1907-1980), was identified as assisting Soviet espionage by Elizabeth Bentley, deciphered KGB cables (Venona), and KGB document cited in The Haunted Wood.[1] Senate investigations Coe worked in the Board of Economic Warfare and later became the Director of Monetary Research in the United States Department of the Treasury. Hofstede's Cultural Dimensions - Leadership Training from MindTools Understanding Workplace Values Around the World Learn how to be more sensitive to the needs of people in different cultures. We know that we are living in a global age. Technology has brought everyone much closer together. This means that people of different cultures find themselves working together and communicating more and more. This is exciting, but it can also be frustrating and fraught with uncertainty.

Tradition and Memory: World Civilizations to 1500 Welcome to the World Wide Web resources, student work, and student discussion attached to General Education 110, World Cultures to 1500, taught by Richard Hooker at Washington State University. This web course has a long and productive history involving students in collaborative and constructivist work with each other and with others outside the course. This course is now being offered as a distance-learning course integrating distant learners with the on-site classroom. If you are not taking the course, feel free to look at our schedule and our readings and join in on our discussions and our "discussion quizzes" with your ideas and knowledge. Please limit your discussion to material around the current week's work; if you have comments or ideas about other parts of the course or readings, send them to me. Any great mail I receive will be forwarded to the discussion group.