Video Klip Ahmad Dhani Berkostum Nazi Lengkap. Rocky's bru: Brunei has freest Press in Asean? Updated: A Letter to the Editor in The Mole Dear Sir, I read with a healthy dose of incredulity about how Malaysia had dropped 23 places to 145th out of 179 countries in the press freedom index (Poorer showing, The Sun, 31 January 2013) ... 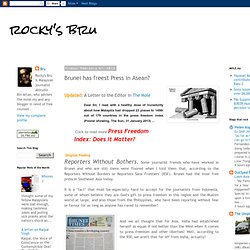 Original PostingReporters Without Bothers. Some journalist friends who have worked in Brunei and who are still there were floored when I told them that, according to the Reporters Without Borders or Reporters Sans Frontiers' (RSF), Brunei had the most free press in Southeast Asia today. It is a "fact" that must be especially hard to accept for the journalists from Indonesia, some of whom believe they are God's gift to press freedom in this region and the Muslim world at large, and also those from the Philippines, who have been reporting without fear or favour for as long as anyone has cared to remember! 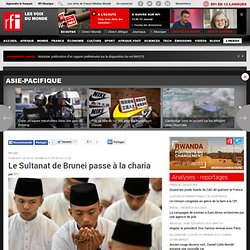 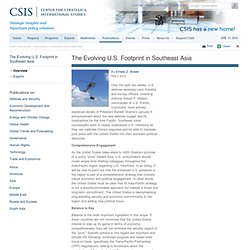 Willard, commander of U.S. Pacific Command, have actively explained details of President Barack Obama’s January 5 announcement about the new defense budget and its implications for the Asia Pacific. Southeast Asian counterparts want to clearly understand U.S. intentions so they can calibrate China’s response and be able to translate joint plans with the United States into their domestic political discourse. Taiwan’s 2012 Presidential Election. Q1: Who are the candidates? 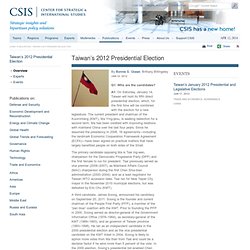 A1: On Saturday, January 14, Taiwan will hold its fifth direct presidential election, which, for the first time will be combined with the election for a new legislature. The current president and chairman of the Kuomintang (KMT), Ma Ying-jeou, is seeking reelection for a second term; Ma has been credited with improving relations with mainland China over the last four years.

Since he assumed the presidency in 2008, 16 agreements—including the landmark Economic Cooperation Framework Agreement (ECFA)—have been signed on practical matters that have largely benefited people on both sides of the Strait. The primary candidate opposing Ma is Tsai Ing-wen, chairperson for the Democratic Progressive Party (DPP) and the first female to run for president. 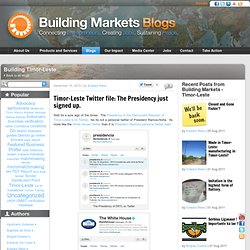 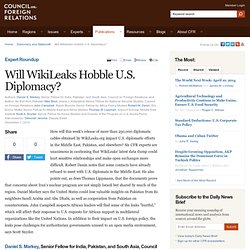 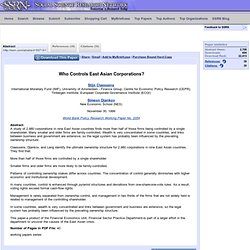 Many smaller and older firms are family-controlled. Wealth is very concentrated in some countries, and links between business and government are extensive, so the legal system has probably been influenced by the prevailing ownership structure. Claessens, Djankov, and Lang identify the ultimate ownership structure for 2,980 corporations in nine East Asian countries. They find that: More than half of those firms are controlled by a single shareholder. Smaller firms and older firms are more likely to be family-controlled. Patterns of controlling ownership stakes differ across countries.