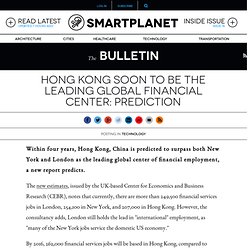 The new estimates, issued by the UK-based Center for Economics and Business Research (CEBR), notes that currently, there are more than 249,500 financial services jobs in London, 254,100 in New York, and 207,000 in Hong Kong. However, the consultancy adds, London still holds the lead in "international" employment, as "many of the New York jobs service the domestic US economy. " By 2016, 262,000 financial services jobs will be based in Hong Kong, compared to 252,500 in New York and 239,000 in London. "Financial service jobs in Hong Kong – which was less than half the London number in 2005 – will have overtaken the number in London and Hong Kong will be the main international financial center in the world," CEBR predicts.

Hong Kong’s online sellers and buyers make novel use of subway. HONG KONG -- During after-work rush hour, dozens of people stand near the turnstiles at Hong Kong’s Mong Kok subway station, as if waiting for a friend to emerge from the escalators. 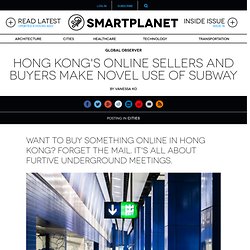 But they are waiting for strangers. Phone calls are made, eyes dart around the center of the station, until, finally, the pairs have found each other by clothing description and with a knowing smile. One man who had been waiting for 10 minutes handed a shopping bag with two large sports figurines still in boxes to another man -- in exchange for US$420. “These include the white jerseys, right?” The Morning Briefing: Innovation in China. From Mao to Now: Legal Changes Seek to Revive Confucius - TLN. Times have changed. 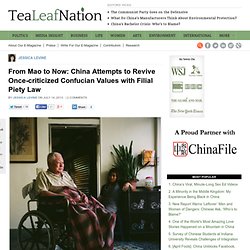 What were once allegorical tenets bound in Confucian principle, school teachings about deference and respect—a son strangles a tiger to save his father搤虎救父, a daughter stows oranges to give to her mother怀橘遗亲 — have become prosecutable mandates in China. India’s Internet startups: challenges and advantages. In the current issue of The Economist, two complimentary articles analyze how India might succeed in finding its own startup culture -- if the South Asian nation can overcome some daunting obstacles. 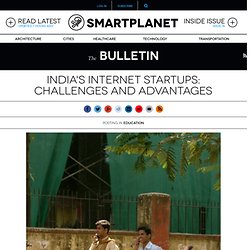 One piece, "Looking for India's Zuckerberg," brings up some surprising statistics: e-commerce sales in India are only 6% of those in China, and only 10% of all Indians have access to the Web. That includes shared computers in Internet cafes. India's infamous bureaucratic government poses hurdles, in the context of business regulations and wireless accessibility. But more Indians are leapfrogging PCs by using the mobile Web. And a new generation of Indian entrepreneurs educated in the West are eager to apply startup business models they've seen in the U.S. to the Subcontinent. In India, browse the web through texts. DELHI -- In 2009, four students dropped out of an engineering college in a small town in southern India to pursue their dream. 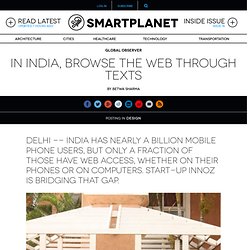 They wanted to channel the vast sea of knowledge floating on the Internet through text messages to millions of people who don’t have access to the web. Now their creation, called SMS Gyan (gyan means knowledge), a search engine available on mobile phones, has 120 million users in India, the Middle East and Africa submitting over five million queries every day. And their company Innoz Technologies has expanded to 45 employees, and it earned $2.5 million worth of revenue last year. The company’s founders say that Innoz is set to become the world’s largest offline search engine in 2015, with projections of 10 million monthly unique users and more than 55 million searches per day. With 120 million Internet users, India has the third-largest number of Internet users in the world. Ideas for India’s education innovators. In India, study finds cash transfers benefit the poor. DELHI -- India is home to one-third of the world's 1.2 billion people who live on less than $1.25 a day, a recent World Bank study finds. 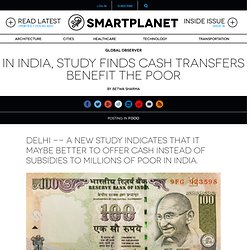 In the past decade, the government has devised social welfare programs like the Mahatma Gandhi National Rural Employment Guarantee Scheme (MGNREGS), the world's largest employment guarantee program, to lift people out of poverty. India’s Public Distribution System (PDS), a massive network of shops across the country, provide millions of poor people basic essentials like wheat, rice, sugar and kerosene oil at subsidized prices. But in recent years, a new strategy has been proposed: having the government directly transfer cash into bank accounts of poor people instead of subsidies.

In Central Asia, a Soviet Past Recedes as New Influences Fill In - Joshua Foust. Kyrgyzstan's humble and sometimes bumpy progress in recent years has come with investment from Turkey, which is viewed favorably and gratefully here, and from China. 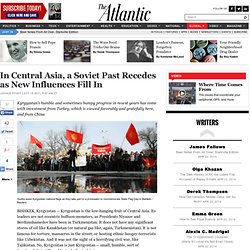 The U.S. Should Focus on Asia: All of Asia - Vali Nasr. Washington's renewed attention to East Asia shouldn't come at the expense of the rest of the continent. 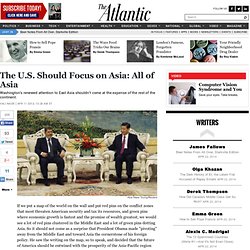 How Hwee Young/Reuters. Is China Trying to Take Over in Central Asia? - Joshua Foust. No matter China's plans, or its economic influence, the politics of Kyrgyzstan still tilt overwhelmingly toward Russia Chinese and Kazakh officials take part in a groundbreaking ceremony for a tax-free cross-border trade zone / AP There is a general assumption in most pop-studies of Central Asia that the region rarely has any agency of its own and is only to be understood as a pawn of the powerful countries on its periphery. 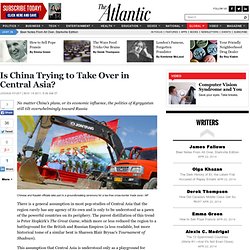 The purest distillation of this trend is Peter Hopkirk's The Great Game, which more or less reduced the region to a battleground for the British and Russian Empires (a less readable, but more historical tome of a similar bent is Shareen Blair Brysac's Tournament of Shadows). This assumption that Central Asia is understood only as a playground for outside powers is underneath almost all Western writing about the region -- and is probably the best reason so many modern books adopt the language of the Great Game to try to describe regional politics.

This makes sense. The Coming Crisis in Central Asia - John Herbst and William Courtney. The American pullout from Afghanistan has the potential to destabilize the entire region. 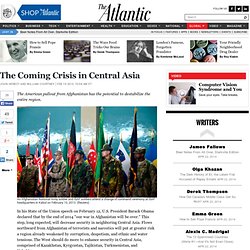 An Afghanistan National Army soldier and ISAF soldiers attend a change of command ceremony at ISAF headquarters in Kabul on February 10, 2013. (Reuters) In his State of the Union speech on February 12, U.S. President Barack Obama declared that by the end of 2014 "our war in Afghanistan will be over. "

Society and Politics in 2100 - Part 1: The Rise of City States. Humans are hard-wired social creatures. We have always organized ourselves starting with nuclear families and extending to formal and informal groupings such as tribes, gangs, clubs, political parties, nations and religions. Today we are on a macro level politically organized around the concept of nation, a recent phenomena, first arising in Europe and then spreading globally. Nationalism is both a positive and negative influence on our behaviour. Will Asia Lead? Originally posted at IEET.ORG Will Asia lead the world in green technologies and in the political-economic transition to sustainability? Can Asia bury past conflicts and create stronger regional institutions including perhaps, step by step, an Asian Union?

Where wheels are a status symbol, could car sharing take off? HONG KONG -- Cars are not just for driving, far from it. But in Asia, the status statement attached to cars is so strongly held that it is holding back the development of car sharing, a transportation option that is widespread in the West. In Asian metropolises with high population densities, it often costs more to own a car than in North America or Europe, and it can be a hassle, as drivers constantly worry about parking, high fees and taxes, high gas prices and bad traffic. It would seem like the ideal place for car sharing to take off, yet start-up firms and analysts say that it is precisely the cost and difficulty of owning a car that make car ownership so desirable -- and car sharing so unattractive.

Fast fashion--the inexpensive trendy clothing manufactured and sold by chains like Zara and H&M--has caught on in Asia. Midrange fashion retailers are expanding at a faster rate in Asia than luxury brands, according to a report by real-estate services firm CBRE, reported the Wall Street Journal. Demand in Asia for cheap chic clothing reflects a broader global trend. It's also reflective of economic changes in China, where half of all 32 million square meters of shopping center space currently under construction globally is underway. Asia Passes Europe as Top Export Destination, For 1st Time Ever - Derek Thompson.

One way the Greek debt crisis could impact the United States is through exports. If investors flee the euro, it will lose value in relation to the dollar, which will make American goods less attractive to Europeans. But here's some interesting news from the Commerce Department (via WSJ): "For the first time in recorded history, the moving 12-month sum of $227.6 billion of U.S. merchandise exports to Asia's emerging market countries surpassed the... $223.7 billion of such exports to the European Union. " US exports to Europe have already fallen 14% year-over-year in the first three months of 2010. Exports to Asia grew by nearly 4% in that time. With the crisis in Greece, this is welcome news because stronger Asian demand could replace some demand lost to a currency crisis in Europe. Asian economies are growing so strongly at the moment that China in particular is scaling up efforts to damp inflation through tighter monetary policy.

World in 2050 - pwc-world-in-2050-report-january-2013.pdf. The Rise of Asia's Cyber Militias - Adam Segal. China, Japan, and others are developing informal teams of patriotic hackers to defend their nations. A Chinese internet cafe customer logs on in Changzhi, Shanxi province / Reuters. The Grim Reality Behind the Philippines' Economic Growth - Jillian Keenan. The country is being heralded as the new Asian success story, but only an elite few reap the rewards. Skyrise buildings are seen amidst a residential district near Manila's Makati financial district on May 3, 2013. (Erik De Castro/Reuters)