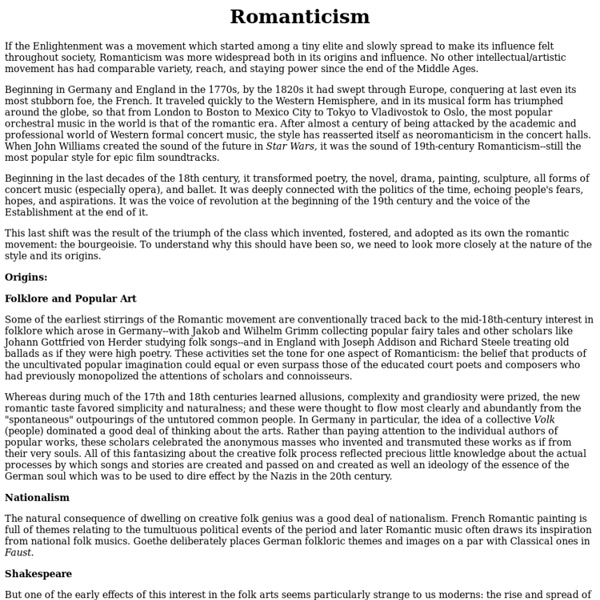 If the Enlightenment was a movement which started among a tiny elite and slowly spread to make its influence felt throughout society, Romanticism was more widespread both in its origins and influence. No other intellectual/artistic movement has had comparable variety, reach, and staying power since the end of the Middle Ages. Beginning in Germany and England in the 1770s, by the 1820s it had swept through Europe, conquering at last even its most stubborn foe, the French. It traveled quickly to the Western Hemisphere, and in its musical form has triumphed around the globe, so that from London to Boston to Mexico City to Tokyo to Vladivostok to Oslo, the most popular orchestral music in the world is that of the romantic era. After almost a century of being attacked by the academic and professional world of Western formal concert music, the style has reasserted itself as neoromanticism in the concert halls. Origins: Folklore and Popular Art Nationalism Shakespeare The Gothic Romance Medievalism

The Culture of Rebellion in the Romantic Era Eugene Delacroix, Liberty Leading the People, 1830. One of Delacroix’s best known works, the painting depicts a bare-breasted Liberty leading Parisians of mixed social and economic backgrounds into battle. The Romantic era is typically noted for its intense political, social, and cultural upheavals. The period is conventionally marked as beginning with the French Revolution in 1789 and ending with the passing of the Great Reform Bill in 1832, occurrences which exemplify the political zeal of the late eighteenth- and early nineteenth centuries as well as the resultant changes brought about in society. Events initially external to England, such as the French Revolution, are internalized in Romantic literature as a part of the debates on more relevant, internal issues in English politics, such as the prededing American Revolution and the imminent Irish Uprising of 1798. One key area in which the influence of the French Revolution manifests itself is in the satiric poetry of the period.

Hyperion Critical Essay by John Keats Hyperion John Keats The following entry presents criticism of Keats's epic poem Hyperion, comprised of two unfinished versions, written in 1818 and 1819 respectively. See also, John Keats Criticism. Constructed as two poems, Hyperion and its attempted revision as The Fall of Hyperion are considered important works by John Keats. Biographical Information Hyperion was undertaken during what many critics consider Keats's most intense period of creative productivity, a period also marked by personal difficulties. Plot and Major Characters Stylistically and thematically influenced by earlier works, the Hyperion poems demonstrate Keats's interest in and response to classic literature. Hyperion relates the fall of the Titans, elemental energies of the world, and their replacement by newer gods. Major Themes The thematic differences between the two versions of Hyperion have been extensively addressed by a wide variety of critics. Critical Reception

What are the characteristic features of poetry during the Romantic Movement?  | eNotes Characteristics of Romantic Poetry There are many angles and point-of-views from which one can study romantic poetry. The most of important characteristic of this form of poetry is imagination. 1)ImaginationIn the words of William Wordsworth, 'poetry is the first and last of all knowledge'. 2)EmotionsWhen it comes to romantic poetry, reason and logic take a backseat. 3)NatureA romantic poet can let loose his/her imagination in the process of interpreting natural phenomena. 4)Pastoral LifeThe pastoral life, culture and traditions are mentioned on a frequent basis in romantic poetry. 5)SymbolismIt is a way of expressing so much in so little. 6)IndividualismIt is one of the important romantic poetry characteristics. The use of romanticism in literature appeals to our dreamy inner-self.

John Keats- The Romantic Context For some critics the defining feature of Romanticism is the belief in the mind's active perception of truth and reality which is, in effect, the process of the creative imagination. Rather than seeing the mind as separate and distinct from the outside world, able to analyse it and dissect it through the proceesses of reason, the Romantic poets perceived a potential harmony between the human mind and the outside world based on an undersanding of the 'one life' which ran though both nature and humanity. Unlike reason the imagination is a synthesising not an analytical power. For Wordsworth this expressed itself in a belief in the perception of the absolute through nature, that the poet's imagination or 'creative sensibility' enabled him to 'see into the life of things' and through his creative vision understand and apprehend the spiritual unity of the universe which included all humanity, nature and God. Keats and the imagination 1) His ideas as expressed in his letters: 1. 2. 3.

Untitled Document By the late 18th century in France and Germany, literary taste began to turn from classical and neoclassical conventions. The generation of revolution and wars, of stress and upheaval had produced doubts on the security of the age of reason. Doubts and pessimism now challenged the hope and optimism of the 18th century. Men felt a deepened concern for the metaphysical problems of existence, death, and eternity. It was in this setting that Romanticism was born. Origins Romanticism was a literary movement that swept through virtually every country of Europe, the United States, and Latin America that lasted from about 1750 to 1870. The Romantic Style The term romantic first appeared in 18th-century English and originally meant "romancelike"-that is, resembling the fanciful character of medieval romances. Romanticism stresses on self-expression and individual uniqueness that does not lend itself to precise definition.

John Keats John Keats (1795-1821), renowned poet of the English Romantic Movement, wrote some of the greatest English language poems including "La Belle Dame Sans Merci", "Ode To A Nightingale", and "Ode On a Grecian Urn"; O Attic shape! Fair attitude! with bredeOf marble men and maidens overwrought,With forest branches and the trodden weed;Thou, silent form, dost tease us out of thoughtAs doth eternity: Cold pastoral! John Keats was born on 31 October 1795 in Moorgate, London, England, the first child born to Frances Jennings (b.1775-d.1810) and Thomas Keats (d.1804), an employee of a livery stable. Keats had his poems published in the magazines of the day at the encouragement of many including James Henry Leigh Hunt Esq. (1784-1859), editor of the Examiner and to whom Keats dedicated his first collection Poems (1817). Having worked on it for many months, Keats finished his epic poem comprising four books, Endymion: A Poetic Romance--"A thing of beauty is a joy for ever"--in 1818.

terms & themes "Romanticism" is a period, movement, style, or genre in literature, music, and other arts starting in the late 1700s and flourishing through the early to mid 1800s, a time when the modern mass culture in which we now live first took form following the establishment of modern social systems during the Enlightenment or Age of Reason: the rise of nation-states as defining social and geographic entities increasing geographic and social mobility, with more people moving to cities & the growth of a literate middle class, new technologies dependent on power from fossil fuels (trains, steamships, industrial printing) longer life-spans and rising standards of living enable ideas or values including individualism, imagination. idealization of childhood, families, love, nature, and the past. The Romantic era rises from the new wealth, stability, and sense of progress created by the preceding Enlightenment. heroic individualism; the individual separate from the masses nostalgia for the past

John Keats : What are the characteristics of his Poetry ? | Articles | Eng With a pure poet, the pursuit of beauty overcomes every other consideration. The poetry of Keats is an unending pursuit of beauty. He pursued truth indeed, but truth for him was beauty. He never intellectualised his poetry. He was gifted with extraordinary sensibility and had an ardent passion for the beauty of the visible world. All his poetry is full of the sensuous appeal of beautiful things. O Wild West Wind, thou breath of Autumn's being. But the beauty and grandeur of the west wind goes beyond our actual experience. Spontaneity and concentration of thought and feeling. Keats was a pure poet in the sense that in his poetry he was a poet and nothing else—not a teacher, not a preacher, not a conscious carrier of any humanitarian or spiritual message. What he experienced and felt upon his pulse he expressed. Submission to the truth of life and experience Keats possessed what Bradley calls "the Shakespeare on strain", and submitted to the truth of life. Pursuit of truth