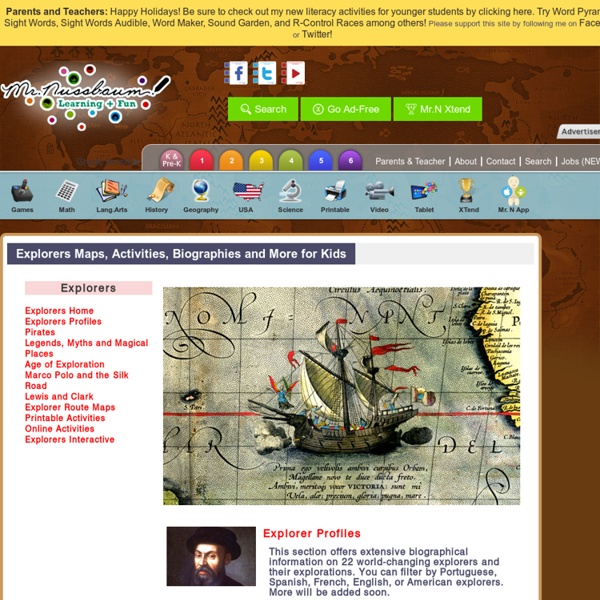 Maphub - Historic Map Annotation Portal Historical Atlas of the British Empire The Ghost Map by Steven Johnson | Online Resources International Big History Association - Home List of map projections This list/table provides an overview of the most significant map projections, including those listed on Wikipedia. It is sortable by the main fields. Inclusion in the table is subjective, as there is no definitive list of map projections. Table of projections[edit] Key[edit] The designation "deployed" means popularisers/users rather than necessarily creators. Type of projection[edit] Cylindrical: In standard presentation, these map regularly-spaced meridians to equally spaced vertical lines, and parallels to horizontal lines.Pseudocylindrical: In standard presentation, these map the central meridian and parallels as straight lines. Properties[edit] Conformal: Preserves angles locally, implying that locally shapes are not distorted.Equal Area: Areas are conserved.Compromise: Neither conformal or equal-area, but a balance intended to reduce overall distortion.Equidistant: All distances from one (or two) points are correct. Notes[edit] Further reading[edit] James P.

Aztec Children The lives of Aztec children are fascinating in many respects. To understand how children fit into Aztec culture, and how they were honoured, we should go right back to the beginning... even before the children were born. Birth Since warfare was glorified by the Aztecs, it was even used to symbolize childbirth. A hymn for a new child sung to the goddess of childbirth, found in the Codex Florentino, said: Down there, where Ayopechcatl lives, the jewel is born, a child has come into the world.It is down there, in her own place, that the children are born.Come, come here, new-born child, come here.Come, come here, jewel-child, come here. A soothsayer then came to the home of the newly born child to study the astrological significance of the child's birth, down to the exact day and minute of the child's entrance into the world. Aztec children and their Parents All of the evidence is that Aztec parents loved their children deeply. Chores and school More about classes and society Games and song

Dymaxion Map Also know as the "Dymaxion Map," the Fuller Projection Map is the only flat map of the entire surface of the Earth which reveals our planet as one island in one ocean, without any visually obvious distortion of the relative shapes and sizes of the land areas, and without splitting any continents. It was developed by R. Buckminster Fuller who "By 1954, after working on the map for several decades," finally realized a "satisfactory deck plan of the six and one half sextillion tons Spaceship Earth." Traditional world maps reinforce the elements that separate humanity and fail to highlight the patterns and relationships emerging from the ever evolving and accelerating process of globalization. All flat world map representations of the spherical globe contain some amount of distortion either in shape, area, distance or direction measurements. The word Dymaxion, Spaceship Earth and the Fuller Projection Map are trademarks of the Buckminster Fuller Institute.

Aztecs for Kids - Daily Life Like nearly all of the ancient civilizations, the rich lived in luxury and the poor worked. In the Aztec civilization, class structure was very important. Homes : The Rich: Homes of the nobles and wealthy were made of sun-dried brick. If you were very wealthy, you home could be made of stone. All homes were whitewashed to make them look clean and shiny. The Poor: Homes of the farmers and other commoners were huts with thatched roofs. Clothing : Upper Class: People in the upper class wore clothing decorated with feathers and embroidery to show their status. Common People: It was against the law for commoners to wear feathers. Marriage : At about age 20, men married women who were ages 14-15. Matchmakers were usually old women. New Babies: The birth of a baby was a really big deal. Correct Behavior : The Aztecs were very concerned that all their citizens behave correctly. Slaves: The Aztec nobles had slaves. Poetry: For all their love of war, the Aztecs had a softer side. Slaves School

Tons of interactive activities here. The routes interactive would be great to use when doing explorer reports and the make your map activity would be very neat when introducing exploration. by amberheern Oct 14