Memphis Beau. Memphis Beau William Eggleston, one of America's most important photographers is a southern gentleman whose private world is straight out of Faulkner. 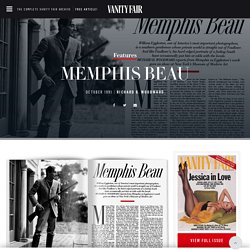 And like Faulkner's, his hard-edged portraits of a fading South have occasionally put him at odds with the locals. RICHARD B. WOODWARD reports from Memphis as Eggleston's work goes on show at New York's Museum of Modem Art. Youtube. The Mythologies of William Eggleston – Darren Campion. Perhaps the best moment of Michael Almereyda’s film William Eggleston in the Real World comes at the very end, between the credits, when we see Eggleston the morning after a hard night (and they pretty much all seem to be hard nights for Eggleston), sitting with his lady friend Leigh Haizlip, as they listen to the haunting Roy Orbison song that gives the film its title. 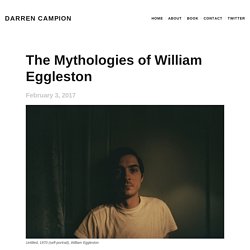 [i] She suddenly remarks how lucky they are to be alive at a time when they can, among other things, enjoy Roy Orbison, rather than in, say, the Middle Ages, when presumably such amenities wouldn’t be available. And, the viewer might well add, when we wouldn’t have been able to experience the photography of William Eggleston either.

It’s a strange and rather touching interlude in what is an otherwise somewhat uneven film, but one that in many ways exemplifies the difficulties that exist in approaching Eggleston and his work. [i] William Eggleston in the Real World (2005), Michael Almereyda, director. [v] Ibid, pg. 14. William Eggleston. Photographer Series: William Eggleston — FORM. How William Eggleston Changed the Way We See the World: An Interview With the Legendary Photographer. The photographer William Eggleston first radicalized the art world 40 years ago with his colorful, dye-transfer prints; the same year he had undertaken a portfolio titled “Election Eve,” a road trip from his home in Memphis, Tennessee, to Jimmy Carter’s hometown of Plains, Georgia. 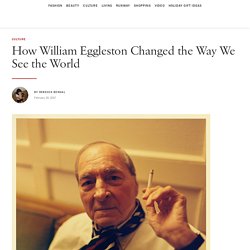 He avoided, to paraphrase his famous quote, the obvious, and veered off the campaign trail, with its barber shops and town halls and babies to be kissed; instead he photographed emptied yards, sides of barns, churches with hand-painted names in crooked lettering, weeds poking through red Georgia clay, a Jimmy Carter for President sticker plastered to the bumper of a brown Chrysler in a rain-puddled parking lot. His pictures did not require human beings. I first saw some of the images that make up “Election Eve” around the time of Bush vs. Gore, and I have not trusted a poll since. Perfectly Banal: William Eggleston. “I had this notion of what I called a democratic way of looking around, that nothing was more important or less important.” — William Eggleston Despite his often mundane subject matter, he is simply not your ordinary photographer. 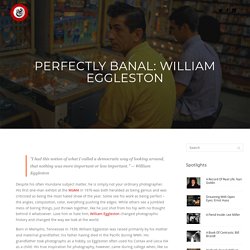 His first one-man exhibit at the MoMA in 1976 was both heralded as being genius and was criticized as being the most hated show of the year. William Eggleston, the Pioneer of Color Photography - The New York Times. Washington, D.C. White ceiling fan by William Eggleston on artnet. William Eggleston: Portraits review – momentous, trivial, marvellous. Even if it is just a tract of Tennessee land, or a ceiling, or some trash on the ground, everything is a portrait in William Eggleston’s work. 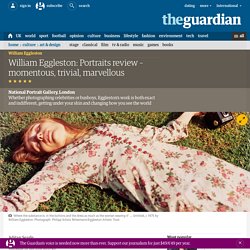 A portrait less of a moment than of a place and an age. Eggleston never diminishes what he sees but somehow enlarges both the momentous and the trivial. Some unknown pensive guy swallowing a burger and staring at it with a kind of avarice, a curator in a phonebooth, a bloke on a bed, a woman alone at the side of a long and empty road, a girlfriend in tears – each photograph is freighted with untold stories. You feel their weight along with the heat of the day, the stale air-conditioned chill in the room, the smell of smoke and beer and sweat in the nightclub, the car-seat vinyl, the instant’s lassitude.

Eggleston’s photography has been derided for its ordinariness, for its compositional blankness, even for its use of colour. He does it by noticing what’s there. Almost every image is arresting. A man waits at a kerb, as erect as a soldier. William Eggleston Memphis c. 1969-71. Exhibition dates: 27th February – 23rd May 2010 THE classic William Eggleston, the one and only. 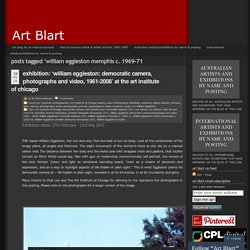 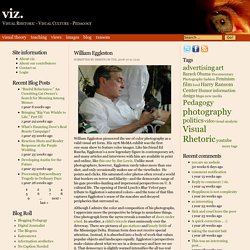 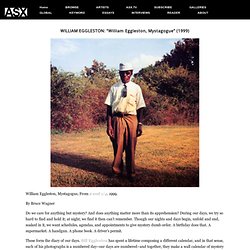 By Bruce Wagner Do we care for anything but mystery? And does anything matter more than its apprehension? During our days, we try so hard to find and hold it; at night, we find it then can’t remember. Though our nights and days begin, unfold and end, soaked in it, we want schedules, agendas, and appointments to give mystery dumb order. These form the diary of our days. Through the Lens of Eggleston - Photo Journal. Happy Birthday, William Eggleston, and Bobbie Gentry. William Eggleston, Untitled, Tallahatchie County, Mississippi, 1972, from the portfolio 14 Pictures, 1972, printed 1974; Collection SFMOMA, Arthur W. 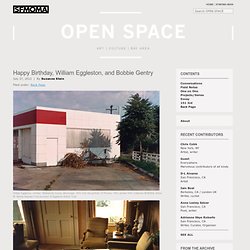 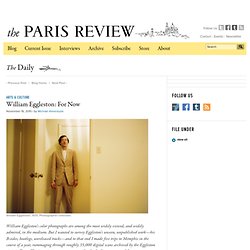 Photographer unknown. William Eggleston’s color photographs are among the most widely viewed, and widely admired, in the medium. But I wanted to survey Eggleston’s unseen, unpublished work—his B-sides, bootlegs, unreleased tracks—and to that end I made five trips to Memphis in the course of a year, rummaging through roughly 35,000 digital scans archived by the Eggleston Artistic Trust. The intention was to come up with a book of images rescued from near oblivion. William Eggleston Talks… In the spring of 1994 William Eggleston visited Los Angeles to shoot a portfolio of Hollywood.

Journalist Kristine McKenna escorted him around town, and they had several in-depth conversations, some in his room at the Chateau Marmont. These are excerpts from those tape-machine recordings, which are compiled in the new book William Eggleston For Now. “I guess you could say my childhood was idyllic. My parents had a great respect for art, and two of the first things given to me as a child by my mother were books on Rouault and De Chirico. My parents always encouraged my interest in art, even though they thought a career as an artist was crazy.

William Eggleston: For Now. William Eggleston has long been lauded as one of photography's pioneers. But this year is looking especially good for him: tomorrow a major retrospective opens at the Los Angeles County Museum of Art (LACMA) and this fall sees the publication of a new book, William Eggleston For Now, from Twin Palms Press. The book collects previously unseen photographs unearthed by filmmaker Michael Almereyda, whose movies include Nadja (1994), Hamlet (2000), and William Eggleston in the Real World (2005)), from Eggleston's picture archive. "I'm am at war with the obvious." William Eggleston. William Eggleston's Big Wheels. Although a photograph always shows the same things, that doesn’t mean those things are always seen the same. This William Eggleston picture is variously known as Untitled, Tricycle and Memphis, 1970. It has been variously seen, too. Now considered a classic, it was initially greeted in many quarters with incomprehension, even as an outright affront.

Eggleston’s tricycle first attracted attention as part of a 1976 exhibition of his work at the Museum of Modern Art in New York City. The Art of Being William Eggleston - Memphis Magazine - June 2012 - Memphis. By Tim Sampson (page 1 of 5) At War with the Obvious. Genius in colour: Why William Eggleston is the world’s greatest photographer - Features - Art. Of course not. That level of dismissiveness is entirely consistent with everything we think that we know about this great photographer from the American South.

J D Salinger would have done the same. This man is not in the business of talking through his work. WILLIAM EGGLESTON - Leica World, 2002.

It was where he’d grown up and he knew each family and every mile of it. Christenberry had first introduced me to William Eggleston in the mid-1980s when Eggleston had been in D.C. for a show of his dye-transfer prints of Elvis’s Graceland. William Eggleston - Chromes (Volume 1) William Eggleston - Imagine Documentary - Part 1. Five Spooky Art Works from MoMA’s Permanent Collection. William Eggleston. Sean O'Hagan meets William Eggleston. WILLIAM EGGLESTON - Ancient & Modern (Intro) Introduction to Ancient and Modernby Mark Holborn William Eggleston was driving with the writer Stanley Booth from Georgia to Tennessee. It was 1978 and Eggleston had acquired an early Kodak instant camera. He started to photograph out of the window of the car and pointed the camera at the sky. The small, rectangular color prints looked to him like fragments of frescoes.

The following day he lay back on the ground and looked up at the sky above him. William Eggleston – “Democratic Camera, Photographs and Video, 1961-2008″ (2010. William Eggleston: Art & Design. Daily Dose Pick: William Eggleston. A controversial pioneer of color photography, William Eggleston makes the fleeting and the everyday worthy of our attention. Influential to both photographers and filmmakers, Eggleston possesses a painter’s eye for pure colors and complex compositions. From a tricycle on a suburban Memphis street to a mixed drink being savored on a plane passing through the clouds, the artist transforms mundane moments into visual poetry. WILLIAM EGGLESTON: “Preface from Election Eve” (1977. Preface from Election Eve.

WILLIAM EGGLESTON: “Draft of a Presentation” (2003. Eggleston Shore. William Eggleston Chromes: New Book Of Unpublished Photos. The second episode of Season 4 brought us another wedding ceremony for the ages, and ended with a bang. [Warning: SPOILERS] In retrospect, we really should have seen it coming. I am referring, of course, to the Big Shocking Plot Twist at the end of Sunday night’s episode of Game of Thrones.

The one that everybody is tweeting about on Twitter. The one that everybody will be talking about tomorrow. (WARNING: If you haven't seen "The Lion and the Rose" yet, stop reading now. We got our first clue last week when Arya Stark and The Hound stumbled across a tavern in the woods. "Needle? " "Lots of people name their swords," Arya said. "Lots of cunts," The Hound replied. William Eggleston.