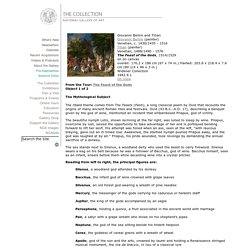 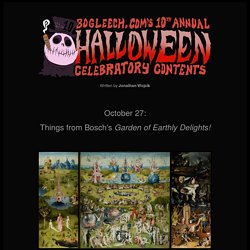 For our third and final look at Bosch's monsters this October, we dive into his single most iconic piece, the "Hell" panel of his three-panel The Garden of Earthly Delights, which, with a good enough computer, you can view online in staggeringly high resolution. This is the painting Bosch's name is immediately linked with and widely regarded as his master work, his Mona Lisa. The Ear Machine While I always interpreted this as some kind of vehicle, it's just as likely a huge demon in its own right, consistenting of nothing but a giant knife and giant ears. Bosch Himself Yes, this giant boat-footed, tree-legged egg man is Bosch's own self-portrait, looking fairly pleased to have a wild party in his shattered body cavity.

Lucifer Sinister Rabbit-man Froggy Love One of my favorite details in the painting is also one of its smallest. Pond Skater Hey, another demon bird with ice skates! Ravenous Rat-dogs. Rogier van der Weyden. Van der Weyden never signed any of his paintings, leaving subsequent art historians to piece together his body of work in the manner of super-sleuths. 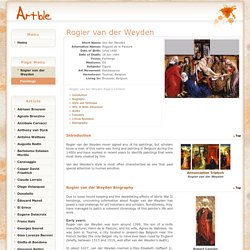 Works that have been attributed to him are difficult to date precisely, and scholars cannot agree on one chronology for his paintings. All attempts to categorize his works into early, middle and later periods should be understood as speculative. Early years:Van der Weyden is believed to have become a master in the Tournai painters' guild in 1432, when he was in his early 30s.

To achieve this level, he must have been studying in Campin's workshop for a number of years although no surviving records clearly indicate this. Despite a definitive chronology, many scholars suggest that the works Virgin and Child, Virgin and Child and St. The Crucifixion; The Last Judgment. J. 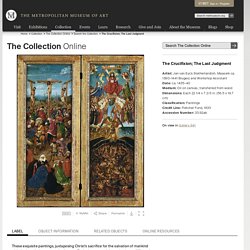 D. Passavant. Kunstblatt (January 12, 1841), p. 9, states that these panels were the wings of a triptych acquired from an auction at a monastery in Spain by Tatistcheff, from which the center, an Adoration of the Magi, had been taken; attributes them to the brothers Jan and Hubert van Eyck; believes two figures beneath the cross are portraits of the brothers and a third a portrait of Margaret van Eyck; notes traces on reverse of panels of two standing figures on pedestals, painted in grisaille.

C. Carton. J. H. Alfred Michiels. G[ustav]. "Les écoles germaniques. " J. The Arnolfini Portrait. This work is a portrait of Giovanni di Nicolao Arnolfini and his wife, but is not intended as a record of their wedding. 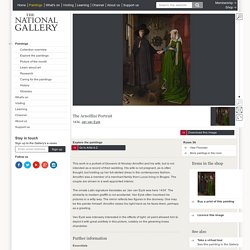 His wife is not pregnant, as is often thought, but holding up her full-skirted dress in the contemporary fashion. Arnolfini was a member of a merchant family from Lucca living in Bruges. The couple are shown in a well-appointed interior. The ornate Latin signature translates as 'Jan van Eyck was here 1434'. The similarity to modern graffiti is not accidental. Van Eyck was intensely interested in the effects of light: oil paint allowed him to depict it with great subtlety in this picture, notably on the gleaming brass chandelier. The Arnolfini Portrait. Displaying <19> Images For - The Arnolfini Portrait... 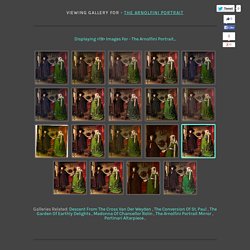 <a href=" creator</a> Botticelli's Birth of Venus - ItalianRenaissance.org. Aside from his painting of the Primavera, Sandro Botticelli’s other greatest work, done for the Medici family, is the Birth of Venus. 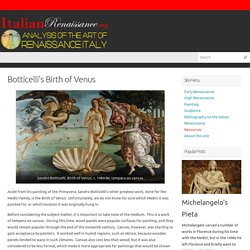 Unfortunately, we do not know for sure which Medici it was painted for, or which location it was originally hung in. Sandro Botticelli. Mantegna Exhibition - Musée du Louvre, Paris. Nothing is known about the circumstances of the commission and the initial destination of the imposing Saint Sebastian, acquired by the Louvre in 1910. 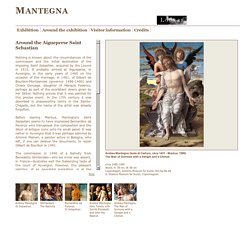 It probably arrived at Aigueperse, in Auvergne, in the early years of 1480 on the occasion of the marriage, in 1481, of Gilbert de Bourbon-Montpensier (governor 1486-1496) and Chiara Gonzaga, daughter of Marquis Federico, perhaps as part of the exorbitant dowry given by her father. Nothing proves that it was painted for this precise event.

Mantegna Exhibition - Musée du Louvre, Paris. The Madonna della Vittoria was commissioned by Francesco II Gonzaga to commemorate the doubtful victory over the French troops of Charles VIII at Fornovo, near Parma, July 6, 1495. 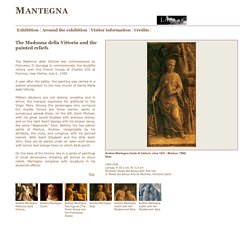 A year after the battle, the painting was carried in a solemn procession to the new church of Santa Maria della Vittoria. Military allusions are not lacking: kneeling and in armor, the marquis expresses his gratitude to the Virgin Mary. Among the personages who surround the marble throne are three warrior saints in sumptuous parade dress; on the left, Saint Michael, with his great sword studded with precious stones, and on the right Saint George with his broken lance, like some “Wagnerian” hero.