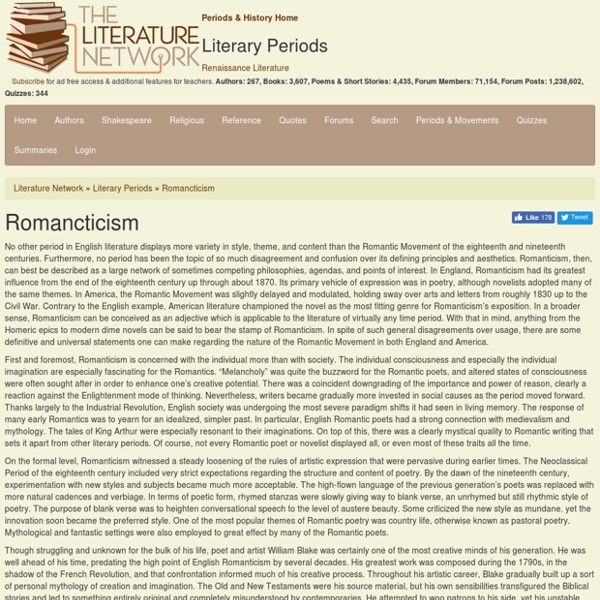 Literature Network » Literary Periods » Romancticism No other period in English literature displays more variety in style, theme, and content than the Romantic Movement of the eighteenth and nineteenth centuries. Furthermore, no period has been the topic of so much disagreement and confusion over its defining principles and aesthetics. Romanticism, then, can best be described as a large network of sometimes competing philosophies, agendas, and points of interest. In England, Romanticism had its greatest influence from the end of the eighteenth century up through about 1870. Its primary vehicle of expression was in poetry, although novelists adopted many of the same themes. First and foremost, Romanticism is concerned with the individual more than with society. On the formal level, Romanticism witnessed a steady loosening of the rules of artistic expression that were pervasive during earlier times. The master of symbolism in American literature was Nathaniel Hawthorne.

About the Romantic Period The romantic period is a term applied to the literature of approximately the first third of the nineteenth century. During this time, literature began to move in channels that were not entirely new but were in strong contrast to the standard literary practice of the eighteenth century. How the word romantic came to be applied to this period is something of a puzzle. Originally the word was applied to the Latin or Roman dialects used in the Roman provinces, especially France, and to the stories written in these dialects. Romantic is a derivative of romant, which was borrowed from the French romaunt in the sixteenth century.

Romanticism Alternative titles: Romantic movement; Romantic Style Romanticism, Britannica Classic: “The Spirit of Romanticism”Encyclopædia Britannica, Inc.attitude or intellectual orientation that characterized many works of literature, painting, music, architecture, criticism, and historiography in Western civilization over a period from the late 18th to the mid-19th century. Romanticism can be seen as a rejection of the precepts of order, calm, harmony, balance, idealization, and rationality that typified Classicism in general and late 18th-century Neoclassicism in particular. It was also to some extent a reaction against the Enlightenment and against 18th-century rationalism and physical materialism in general.

Emily Bronte Emily Bronte (1818-1849), English author and one of the famed Bronte sisters wrote Wuthering Heights (1847); Catherine Earnshaw, may you not rest as long as I am living! You said I killed you—haunt me, then! The murdered do haunt their murderers. I believe—I know that ghosts have wandered on earth. Be with me always—take any form—drive me mad! Untitled Document By the late 18th century in France and Germany, literary taste began to turn from classical and neoclassical conventions. The generation of revolution and wars, of stress and upheaval had produced doubts on the security of the age of reason. Doubts and pessimism now challenged the hope and optimism of the 18th century. Men felt a deepened concern for the metaphysical problems of existence, death, and eternity.

English literature: The Romantic Period At the turn of the century, fired by ideas of personal and political liberty and of the energy and sublimity of the natural world, artists and intellectuals sought to break the bonds of 18th-century convention. Although the works of Jean Jacques Rousseau and William Godwin had great influence, the French Revolution and its aftermath had the strongest impact of all. In England initial support for the Revolution was primarily utopian and idealist, and when the French failed to live up to expectations, most English intellectuals renounced the Revolution. However, the romantic vision had taken forms other than political, and these developed apace.

Famous people of the Romantic Period The Romantic period or Romantic era lasted from the end of the Eighteenth Century towards the mid 19th Century. Romanticism was a movement which highlighted the importance of: The individual emotions, feelings and expressions of artists.It rejected rigid forms and structures. Instead it placed great stress on the individual, unique experience of an artist / writer.Romanticism gave great value to nature, and an artists experience within nature. This was in stark contrast to the rapid industrialisation of society in the Nineteenth Century.Romanticism was considered idealistic – a belief in greater ideals than materialism and rationalism and the potential beauty of nature and mystical experience.Romanticism was influenced by the ideals of the French and American revolution, which sought to free man from a rigid autocratic society. Over time, it also became more associated with burgeoning nationalistic movements, e.g. movement for Italian independence.

British Romanticism: Characteristics of Romantic Poets Later Romantic Poets The following share characteristics of later Romantic poets: Lord Byron (1788-1824): Lord Byron enjoyed unmatched popularity. The Norton Anthology of English Literature: The Romantic Age: review: Summary Writers working in the time period from 1785 to 1830 did not think of themselves as “Romantics,” but were seen to belong to a number of distinct movements or schools. For much of the twentieth century scholars singled out five poets—Wordsworth, Coleridge, Byron, Percy Shelley, and Keats—and constructed a unified concept of Romanticism on the basis of their works. Some of the best regarded poets of the time were in fact women, including Anna Barbauld, Charlotte Smith, and Mary Robinson. AZlibrary - For Arizona Residents - Login Arizonans can explore thousands of online articles and images from popular magazines, scholarly journals, current newspapers and other reference works through their public and school library websites. We encourage you to use your public or school library?s website to access these resources. If you are not connecting through your library?s website, you will be asked to enter your home zip code to continue.

List of Works, Study Guides & Essays Emily Bronte Emily Brontë was born on July 30th, 1818, the 5th child of the Reverend Patrick Brontë, a stern Evangelical curate, and his wife Maria. When Emily was three years old, her mother died of cancer, and her Aunt Branwell, a strict Calvinist, moved in to help raise the six children (another daughter, Anne, was born soon after Emily). They lived in a parsonage in Haworth with the bleak moors of Yorkshire on one side and the parish graveyard on the other. When Emily was 6 years old she went to a boarding school run by charity, the Clergy Daughters' School at Cowan Bridge, where her older sisters Maria, Elizabeth, and Charlotte were already enrolled. The school was in no sense a material improvement over her home environment: it was run with the intention of punishing the pupils' bodies that their souls might be saved.