Book of Flower Studies. Master of Claude de France. Today is World #ArabicLanguageDay so here's an image from one of @UniofOxford's oldest #Arabic manuscripts! It highlights not just the beauty of the script but also Islamic civilization's valuable scientific contributions &amp; exchange with Europe (Bodle. Imago Tusciae – RSA Digital Resources. Digital Humanities – RSA Digital Resources. A select database of digital books relating to the development of theology and philosophy during the Reformation and Post-Reformation/Early Modern Era (late 15th-18th c.). 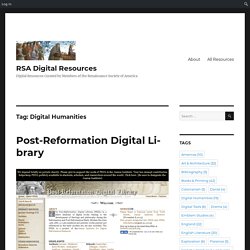 Late medieval and patristic works printed and referenced in the early modern era are also included. The PRDL is a project of the Junius Institute for Digital Reformation Research. This resource is aimed at helping the humanities community collect data about the impact of programs such as professional development seminars, public humanities projects, and programs for students that prepare them for college and help them imagine humanities careers. These surveys are designed to support the humanities community in articulating the impact of its work and making the case for the resources to support it.

Renaissance Knowledge Network (ReKN) Provides access to an ongoing, partially crowdsourced environmental scan of early modern studies as it intersects with the digital humanities. Marenzio Online Digital Edition (MODE) Manicule. An Introduction to Medieval Ink. Read our blog on discoveries found during lockdown at Oxburgh Hall. Botany : the Science of Beauty. This exhibition marks 2020 as the International Year of Plant Health, displaying examples of our books which refer to various types of plants and their uses. 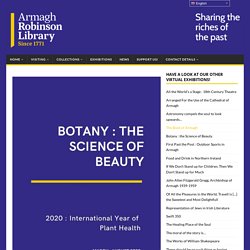 Botany is the science of plant life. The first written records of plants go back as far as the Neolithic Age, 10,000 years ago. This exhibition marks the International Year of Plant Health, as announced by the United Nations (UN) General Assembly. The UN aims to raise awareness on how protecting plant health can help end hunger, reduce poverty, protect the environment and boost economic development.

Antonius Münchenbergs herb - Naturhistoriska riksmuseet. Revisiting an Ancient Theory of Herbalism. HOW, I HAVE often wondered, did people first discover the highly specific applications of particular plants and herbs? 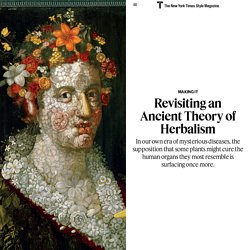 That ginseng improves energy, say, or that ginger alleviates nausea, or that horsetail, which contains silica, might help hair to grow? One theory, possibly apocryphal and certainly much maligned by modern medicine, is that the physical characteristics of plants themselves provided clues as to how they might be used. German library pays £2.5m for 'friendship book', 400 years after it first tried to buy it. Almost 400 years after Augustus the Younger tried and failed to buy the “extraordinary” Das Große Stammbuch – a “friendship book” signed by some of the most powerful figures of 17th-century Europe – for the library he was building in Wolfenbüttel, Germany, it has finally landed on his shelves. 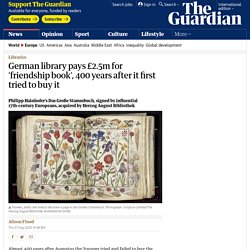 Duke Augustus, a German member of the House of Welf who died in 1666 aged 87, was instrumental in collecting some of the hundreds of thousands of books that form the Herzog August Bibliothek, one of the world’s oldest libraries, which is named after him. In 1648, he set out to acquire a book that had belonged to Philipp Hainhofer, a German merchant and diplomat from Augsburg. As he travelled from court to court, Hainhofer would ask dignitaries to paint in his album amicorum, or friendship book, also known as a stammbuch. Hortus Sanitatis: an early herbal. If you visit the Snakes exhibition at National Museum Cardiff (open till 15 September), you will see a 16th century book from the Library collections. 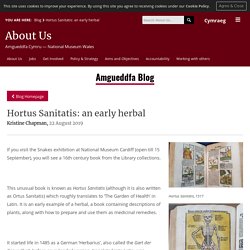 This unusual book is known as Hortus Sanitatis (although it is also written as Ortus Sanitatis) which roughly translates to ‘The Garden of Health’ in Latin. From Observation to Inspection: Florike Egmond on Microscopic Records in Early Modern Visual Albums of Nature - Microscopic Records. Stefan Hanß: Florike Egmond is a cultural historian of early modern sciences at the University of Leiden and a leading expert on sixteenth-century natural history. 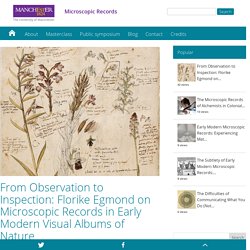 After presenting research on Adriaen Coenen, a sixteenth-century Dutchman who collected and drew marine life, Florike Egmond charted the wide web of knowledge production and exchange of naturalist Carolus Clusius. In 2010, then, Florike Egmond rediscovered hundreds of long-lost watercolour drawings of animals used as template models for the illustrations of the Historiae Animalium of famous Swiss humanist Conrad Gessner (1516–1565).

In your monograph, you explore what you called “a prehistory of the microscope” or “micro before the microscope”: a broader sixteenth-century culture of interest in the detailed observation of natural environments that precedes the invention of the microscope. You emphasise the significance of continuity. Fig. 1: Adriaen Coenen, Visboeck (1577–81), f. 294r. Fig. 3: Libri picturati, A26, f. 23. Helmingham herbal and bestiary, - Search Yale Digital Content. Physical distancing from manuscripts and the presence of the digital facsimile – Cambridge Medieval Graduate Students. Suzette van Haaren is a PhD student at the University of St Andrews and the University of Groningen. 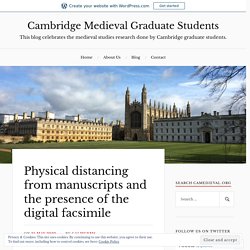 She is writing her dissertation on the effects of digitisation for the reproduction, perception and preservation of medieval manuscripts. Follow her on Twitter @suzettevhaaren. It seems that on my daily rounds of exercise (be they walks or cycle rides) through Cambridge, I find myself gravitating more and more back to the spaces where I look at manuscripts. Today I passed by Corpus Christi College, where, behind the large wooden doors, the Parker Library is situated. Matt 5:17-5:23, Pg 18. The future of museums, exhibitions and the objects they display. A Woodblock’s Career in: Nuncius Volume 35 Issue 1 (2020) The Blocks, the Tools, and the Printed Plants - Jessie Wei-Hsuan Chen.

The Blocks, the Tools, and the Printed Plants: The Making and Printing of Botanical Woodblocks at the Early Modern Officina Plantiniana 2017–2018, MA Thesis Project, With the Support of the Museum Plantin-Moretus Supervisor: Prof. 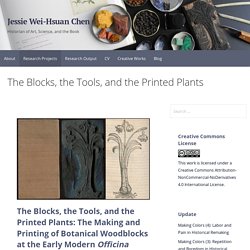 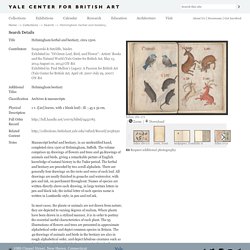 The volume comprises 95 drawings of flowers and trees and 49 drawings of animals and birds, giving a remarkable picture of English knowledge of natural history in the Tudor period. The herbal and bestiary are preceded by two scroll alphabets. There are generally four drawings on the recto and verso of each leaf. All drawings are neatly finished in gouache and watercolor, with pen and ink, on parchment throughout. Names of species are written directly above each drawing, in large textura letters in pen and black ink; the initial letter of each species name is written in Lombardic style, in pen and red ink. In most cases, the plants or animals are not drawn from nature; they are depicted to varying degrees of realism. Digitised Manuscripts. Content ff. 1-147v: A herbal from northern Italy; the text is chiefly an adaptation of Dioscorides, De Materia Medica in Latin, with occasional entries in Italian, including a list or index of plants (ff. 137r, 138r-v, 142r-145r, 147r-v). 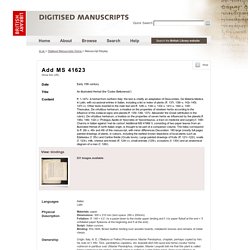 They come in all styles and sizes, but what exactly are they and what was their purpose? Zoomorphic initial D with a dragon forming the ascender. Bible, France, 12th century. Bibliothèque nationale de France, Arsenal, Ms 578, f. 6v. Details of an item from the British Library Catalogue of Illuminated Manuscripts. Catalogue of Additions to the Manuscripts in the British Museum, 1894-1899 (London: the British Museum, 1901), p. 212. Janet Backhouse, ‘A Victorian Connoisseur and His Manuscripts: The Tale of Mr. Jarman and Mr. Medical recipes from Gilbertine nuns - Medieval manuscripts blog. On 4 February we celebrate the feast of St Gilbert of Sempringham (1083–1189), an Englishman of Anglo-Norman descent who established the Gilbertine Order – the only religious Order that was founded in England during the Middle Ages. We would like to mark this event by sharing our discovery of a previously unidentified manuscript that was owned by the first of the thirteen monasteries that Gilbert established during his life: the Priory of St Mary at Sempringham in Lincolnshire.

The feast of St Gilbert highlighted in a calendar of saints (England, c. 1260): Add MS 54179, f. 1v Gilbert founded Sempringham Priory, in or shortly before 1131, for seven women who desired to follow a strict religious life. Worcester Cathedral Library and Archive Blog. Worcester Cathedral Library’s manuscripts can be full of surprises, and they are not always the most elegant or carefully preserved parts! Here is an example that has been badly damaged by damp sometime during its seven hundred year history: Image copyright the Dean and Chapter of Worcester Cathedral (UK) This page appears at the very end of the manuscript catalogued as F.157. Mirador Viewer. Spine (seq. 1)Front cover (seq. 2)Inside front cover (seq. 3)Front fly leaf (1). Endpaper (seq. 4)Front fly leaf (2) (seq. 5)p. [1].

Johannis de Buchwald Specimen medico-practico-botanicum, oder, Kurtze und deutliche Erklärung derer in der Medicin gebräuchlichsten und in Dännemarck wachsenden Erd-Bewächse Pflantzen und Kräuter ... In eben die alphabetische Ordnung gebracht ... - Harvar. Leonard Fuchs. By ‘Leonhardus Fuchs, too, has won great honor among us Germans, as well among foreign nations, with his history of herbs that he published in Latin and German and adorned with beautiful illustrations and thus has made possible diligent research by many others.’* Adam Lonicer (1587) Chig.F.VII.158. Rose by any Other Name. Flowering of florence botanical. [Botanical manuscript of 450 watercolors of flowers and plants]. — Dumbarton Oaks. The Model Book of Calligraphy (1561–1596) The Carrara Herbal – Sarah Kyle’s Pandora’s box. Sarah R. En Tibi. Name: the ‘En Tibi’ herbariumScientific name: ‘En tibi perpetuis ridentem floribus hortum‘ [‘Here for you a smiling garden of everlasting flowers’]Known for: not being of known originRecord broken: Most overdue library book?

If you ever want to start an argument between two historians of science, ask them when a scientific field started. The problem is that creating a line between science and not-science is imposing a simple division on a fuzzy process. The Enigma of Who Made the En Tibi Herbarium May Have Been Solved. Naturalis Topstukken. Oratie van andel. Códices de mexico. Are Pressed Plants Windows into World History? From Plant Press, Vol. 20, No. 3, July 2017. By Gary Krupnick. Dioscurides Neapolitanus copied at end of 6c.