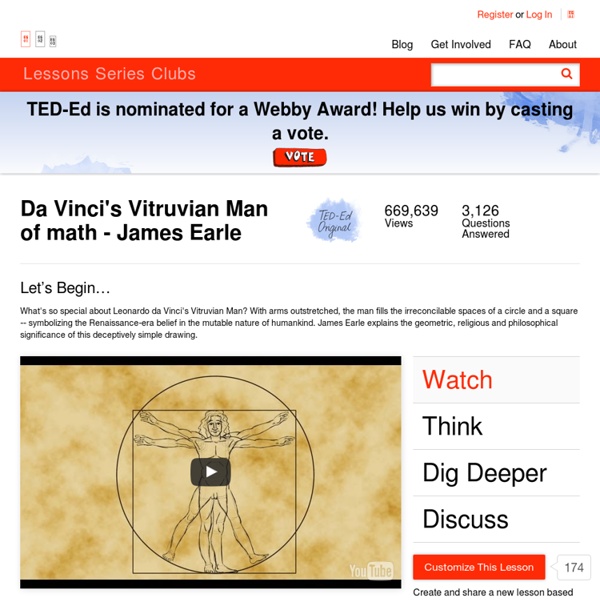 Pico della Mirandola’s Oration on the Dignity of Man Numberphile did a great explanation of “Squaring the Circle” See James Earle's other Lesson. After Rome was destroyed, people were wary of attachment to physical beauty. As Christianity gained traction, Romans instead began to focus on the metaphysical beauty of virtue, and art began to follow suit. Related:  Italian Renaissance

The man in charge of modernising the Uffizi | Apollo Magazine Eike Schmidt is the most high-profile of the new directors appointed to run Italy’s leading museums. He talks to Apollo about his sensitive reforms of the Uffizi and keeping up the pace of change Eike Schmidt is a busy man. Schmidt is one of 20 new directors, seven of whom are non-Italians, who were appointed to lead Italian museums and heritage sites by the Italian culture minister Dario Franceschini in August 2015 (only one of the 20, Anna Coliva at the Galleria Borghese in Rome, was a reappointment; 10 further appointments were made in February 2017). It is the imported cultural leaders who face the greatest scrutiny, and none more so than Schmidt. ‘I think, considering the tradition of Italy, the tradition of omertà, which is the opposite,’ he says, ‘that I’d rather have too much transparency. It is a singular circumstance in which to open one’s account as a museum director. ‘We’ve used the works of art to guide people,’ says Schmidt. Annunciation (before 1560), Plautilla Nelli.

The Atlantic slave trade: What too few textbooks told you - Anthony Hazard The Atlantic slave trade sent slaves to various locations in the world. What effect did this forced migration have on these areas? Visit the Mariner’s Museum Captive Passage website. Gain a greater understanding of life aboard the slave ships at PBS. What do North America, the Caribbean, Brazil, Europe and Africa all have in common? Are their myths and misconceptions about slavery?

GIORGIO VASARI'S LIVES OF THE ARTISTS This page will, in time, contain all of Giorgio Vasari's Lives of the Artists, all in unabridged English translations. Each Life will be supplimented by illustrations and a bibliography. Comments and suggestions are welcome. Please note that the undersigned claims all rights and privileges under current copyright laws. How Magellan circumnavigated the globe - Ewandro Magalhaes Interested in learning more about Ferdinand Magellan? This link is a great starting place! This History site about Portuguese explorer Magellan is also full of great information. This presentation by Laurence Bergreen, the author of Over the Edge of the World: Magellan’s Terrifying Circumnavigation of the Globe, a book that recounts every detail of the expedition also is full of information about this important voyage. Learn more about the Treaty of Tordesillas and how it pushed Spain to try and find a western route to the Spice Islands.

A Free Course on Dante's Divine Comedy from Yale University Over the years, we've featured the many drawings that have adorned the pages of Dante's Divine Comedy, from medieval times to modern. Illustrations by Botticelli, Gustave Doré, William Blake and Mœbius, they've all gotten their due. Less has been said here, however, about the actual text itself. Perhaps the most important work in Italian literature, Dante Alighieri (1265-1321) wrote the Divine Comedy (consisting of Inferno, Purgatorio, and Paradiso) between the years 1308 and 1320. And that text is largely the subject of Dante in Translation, a free online course taught by Yale's Giuseppe Mazzotta. The course is an introduction to Dante and his cultural milieu through a critical reading of the Divine Comedy and selected minor works (Vita nuova, Convivio, De vulgari eloquentia, Epistle to Cangrande). You can watch the 24 lectures from the course above, or find them on YouTube and iTunes in video and audio formats. Primary texts used in this course include: Dante. Related Content:

Mona Lisa by Leonardo Da Vinci – with Martin Kemp – Art Detective View this week’s image here. Martin Kemp is Professor Emeritus of the History of Art; Honorary Fellow of Trinity College. Professor Kemp has published extensively on Leonardo, Renaissance art, and the links between art and science. Producer: Dan Morelle Donatello's David – ItalianRenaissance.org Donatello, David, c. 1440-1460, bronze Perhaps Donatello’s landmark work – and one of the greatest sculptural works of the early Renaissance – was his bronze statue of David. This work signals the return of the nude sculpture in the round figure, and because it was the first such work like this in over a thousand years, it is one of the most important works in the history of western art. The work was commissioned by Cosimo de’Medici for the Palazzo Medici, but we do not know when during the mid-fifteenth century Donatello cast it. It was originally placed on top of a pedestal in the center of the courtyard in the Palazzo Medici, so the viewer would be looking up at it from below (unlike the view we typically get of it in photographs). David is shown at a triumphal moment within the biblical storyline of his battle with the Philistine, Goliath. Before Donatello’s work, David was typically depicted as a king, given his status in the Old Testament. Donatello: Sculptor , by Roberta J.

New Renaissance: how Florence is freeing its great female artists | Art and design In a dark cluttered studio in central Florence, restorer Rossella Lari is working on a little-known jewel of the Renaissance. It’s vast: a seven metre by five metre depiction of the Last Supper, with figures that are almost lifesize, that was painted in the 1560s. As she works, Lari says she thinks often of the person who painted it. “You get to know an artist when you restore their painting,” she says. “You learn about them from the way they use the paint, from their brushstrokes, from their attention to detail.” Her name was Plautilla Nelli (1524‑1588), and the painting Lari is working on is her masterpiece. Ask most people to name a female artist, and chances are they will come up with a contemporary figure: Tracey Emin, Rachel Whiteread or Paula Rego. Now, though – nearly half a millennium on – that is beginning to change. Nelli’s Last Supper, which takes up an entire wall of the crowded studio in which Lari works, shows the same scene with some significant differences.

Virtual Tour of Uffizi Gallery Florence Lets You Explore the Museum Online Today, an increasing number of cultural institutions across the globe are finding new ways to digitally attract and educate audiences. From 3D scans of sculptures to free art books, many arts organizations now provide free online resources to the public. In addition to research tools, however, some museums have taken this digitization trend to the next level by offering exclusive virtual tours of their premises and permanent collections through their websites, with Florence’s famed Uffizi Gallery as a recent recruit. Available on the Uffizi’s website, this virtual tour allows anyone to “visit” the museum from the comfort of his or her home. Situated in the heart of Florence, Italy, the Uffizi Gallery proudly houses the world’s most comprehensive collection of Italian Renaissance Art. See masterpieces of the Renaissance with this virtual tour of Florence’s Uffizi Gallery. Here’s an interactive look at the Uffizi Gallery: All images via Uffizi Gallery. Related Articles: