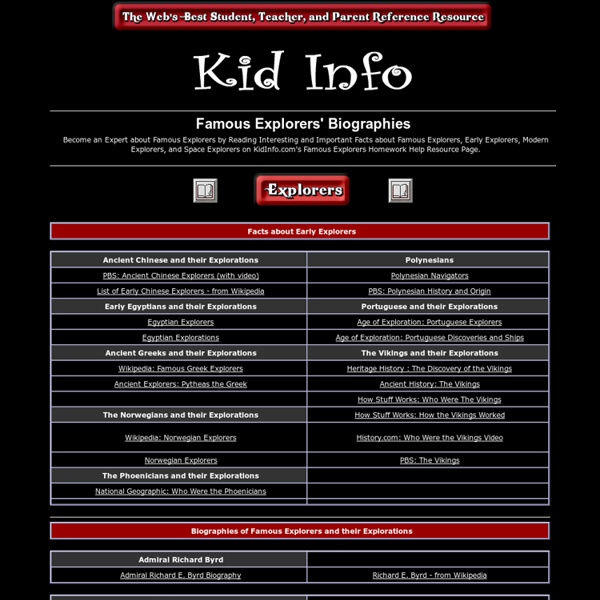 Explorers-in-Residence from National Geographic: Highlights some of the world of today's prominent explorers and scientists. Famous Space Explorers: Quick facts, photos, and information about their space exploration National Geographic: Explorers A-Z: Explorers are listed in alphabetical order with a links to websites with facts about each explorer Explorers-EnchantedLearning.com: Brief biographical information on famous explorers; Search alphabetically or by date or continent PBS: The Conquistadors (Cortes, Pizarro, Orellana, Cabeza de Vaca): Historical facts, timeline Wikipedia: Canadian Explorers: Alphabetical listing of Canadian explorers with links to biographies America's Journeys: American Journeys contains more than 18,000 pages of eyewitness accounts of North American exploration, from the sagas of Vikings in Canada in AD 1000 to the diaries of mountain men in the Rockies 800 years later. Conquest of America:This Site describes the 15 year Conquest of Native America.

Renaissance for Kids: Age of Exploration and Discovery History >> Renaissance for Kids The Age of Exploration (also called the Age of Discovery) began in the 1400s and continued through the 1600s. It was a period of time when the European nations began exploring the world. Why explore? Outfitting an expedition could be expensive and risky. How did expeditions make money? Expeditions made money primarily by discovering new trade routes for their nations. Some expeditions became rich by discovering gold and silver, such as the expeditions of the Spanish to the Americas. Henry the Navigator The Age of Exploration began in the nation of Portugal under the leadership of Henry the Navigator. Christopher Columbus Soon the Spanish wanted to find a trade route to the Far East. Portugal and Spain Portugal and Spain became the early leaders in the Age of Exploration. Spain sent over conquistadors to explore the Americas and to conquer the peoples there. Portugal sent out Vasco da Gama who found a trade route around the southern tip of Africa and to India.

Explorers and Explorations Explorers The history of the world is filled with explorers and the voyages or expeditions they took. Find out about some of them here. Drop Down Menu of Explorers Use this handy menu to find out more about individual explorers. The Age of Exploration The Mariners' Museum brings you a study of how explorers and what they found changed the world, from the beginnings of sailing to James Cook. Explorers and Expeditions Your About Guide to Geography gives you a wealth of information on famous explorations throughout history, including Columbus, Magellan, Marco Polo, and Charles Darwin. Female Explorers Read about Sacajawea (who guided Lewis and Clark across the Louisiana Territory), Mary Leakey (who found many ancient human skeletons in Africa), and more female explorers. Voyage of Exploration: Discovering New Horizons This ThinkQuest project impressively traces voyages of exploration down through history, including images and timelines along the way. Graphics courtesy of ArtToday

A History of the Age of Exploration The Age of Exploration or Age of Discovery as it is sometimes called, officially began in the early 15th century and lasted until the 17th century. The period is characterized as a time when Europeans began exploring the world by sea in search of trading partners, new goods, and new trade routes. In addition, some explorers set sail to simply learn more about the world. Whatever their reasons though, the information gained during the Age of Exploration significantly helped in the advancement of geographic knowledge. Reasons for Exploration and Key Voyages Though the desire to simply explore the unknown and discover new knowledge is a typical human trait, the world's famous explorers often lacked the funding needed for a ship, supplies, and a crew to get underway on their journeys. Many nations were looking for goods such as silver and gold but one of the biggest reasons for exploration was the desire to find a new route for the spice and silk trades. continue reading below our video

How was the world changed by the Age of Exploration? - Zach Schiffman's Captain's (B)log Slavery and the Triangular Trade After the New World was discovered by the Europeans, more plants and crops were discovered as well. These crops were in high demand back in the Old World, and thousands and thousands were needed to be brought back from America. There were so many crops to grow and harvest that they would capture Africans from their homes and bring them to the New World, forcing them to work as slaves in the fields. Triangular Trade The ocean winds worked perfectly for the Europeans to use, forming a triangle to get to each area that they needed to get to. The Middle Passage The slaves only participated in one “leg” of this triangle, the Middle Passage, although it was the worst by far. Many of these Africans would rather die than suffer these awful conditions. Resistance to Slavery Not all Europeans agreed with the idea of slavery, though. Many groups of people considered slavery to be unholy, and said that it “violates the right of man.” Slavery today