Where the Middle Ages Begin 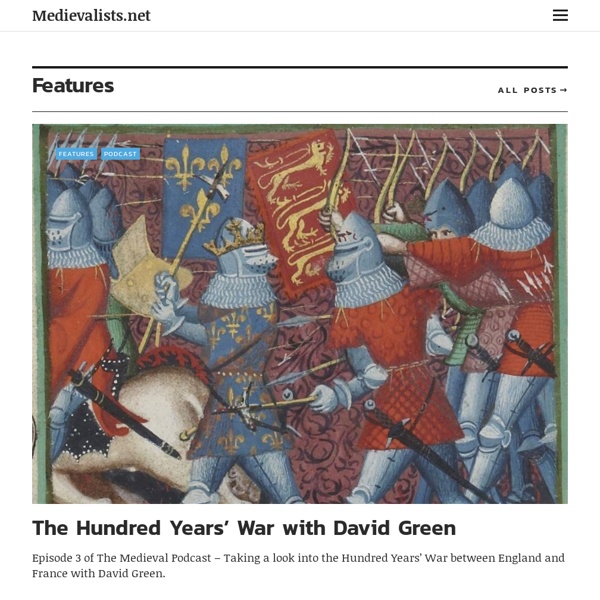 Mythical Chronology Limits of the Chart The chart does not establish precise historical dates, but shows the relative position in time of certain legends and characters as may be deduced from the legends themselves. Immortals Among those listed as immortals (the first generations of beings), some have been reported dead: the CYCLOPES, the GIANTS, the Gorgon Medusa 1, Echidna, Orthus, Chimera, the Sphinx and Ladon 4 (see also BESTIARY). The ERINYES, the MELIAD NYMPHS, the GIANTS, and Aphrodite were born as a result of the Castration of Uranus. The immortals are listed in the order of their appearance, according to Hesiod.

On Plants Historia Plantarum (On plants) is a natural science encyclopedia, in which animals, plants, and minerals are illustrated and described for their medicinal properties, in keeping with the medieval tradition of the tacuina medievali (medieval health handbooks), and from which the codex derives its most common name, Tacuinum sanitatis. The work was first compiled as Taqwim al-Sihhah (The maintenance of health) by the 11th-century Baghdad physician Ibn Buṭlān, and chief among his Greek sources was Dioscorides, a physician in the first century. The court in Sicily commissioned a Latin translation in the mid-13th century. Roman Army - Recruitment, Legions, Siege Warfare & More Evolution of the Roman Army: Recruitment of Soliders for the Roman Army: The Roman army changed over time. The consuls had the power to recruit troops, but in the last years of the Republic, provincial governors were replacing troops without the approval of the consuls. This led to legionaries loyal to their generals rather than Rome. Before Marius, recruitment was limited to citizens enrolled in the top 5 Roman classes.

Home Click here to jump straight to the articles: Original Preface. The Catholic Encyclopedia, as its name implies, proposes to give its readers full and authoritative information on the entire cycle of Catholic interests, action and doctrine. What the Church teaches and has taught; what she has done and is still doing for the highest welfare of mankind; her methods, past and present; her struggles, her triumphs, and the achievements of her members, not only for her own immediate benefit, but for the broadening and deepening of all true science, literature and art — all come within the scope of the Catholic Encyclopedia. Goddesses of antiquity offer Moses a path away from patriarchy – via funk and soul Aeon email newsletters are issued by the not-for-profit, registered charity Aeon Media Group Ltd (Australian Business Number 80 612 076 614). This Email Newsletter Privacy Statement pertains to the personally identifying information you voluntarily submit in the form of your email address to receive our email newsletters More generally, when visiting the Aeon site you should refer to our site Privacy Policy here.

Dioscurides Neapolitanus copied at end of 6c The precious codex known as the Dioscurides Neapolitanus contains the work of Pedanius Dioscorides, the Greek physician who was born at Anazarbus near Tarsus in Cilicia (present-day Turkey) and lived in the first century AD during the reign of the Emperor Nero. Dioscorides wrote the treatise Perì üles iatrichès, commonly known in Latin as De materia medica (Of medical substances), in five books. It is considered the most important medical manual and pharmacopeia of ancient Greece and Rome and was highly regarded in the Middle Ages in both the Western and Arab worlds. The work covers the therapeutic effectiveness of natural substances originating in the animal, vegetable, and mineral kingdoms. The codex at the National Library of Naples includes only the herbal, which, in its 170 illustrated pages, covers all the known medicinal plants with a commentary that describes each plant, its habitat, and its therapeutic uses.

Top 10 Worst Plagues In History Health History is dotted with epidemics and plagues, but a certain number of them stand out as unique for their severity and impact on future generations. This is a list of the worst plagues in man’s recorded history. Moscow Plague and Riot The first signs of plague in Moscow appeared in late 1770, which would turn into a major epidemic in the spring of 1771. The measures undertaken by the authorities, such as creation of forced quarantines, destruction of contaminated property without compensation or control, closing of public baths, etc., caused fear and anger among the citizens.

Medieval and Renaissance Fact and Fiction undefined This page is meant to be a guide to resources available on the Web for people who are interested in the history, culture, literature and re-creation of the Middle Ages and Renaissance. There are hundreds of sites on the Middle Ages on the Web. I know I have only a small percentage of what is out there, but I have tried to organize this site so that you will have an easier time finding what you want. Please e-mail me to let me know about good sites that I haven't included yet. Anaximander of Miletus and His Philosophy on the Origin of All Things Anaximander of Miletus was a Pre-Socratic philosopher who belonged to the Milesian school. As indicated by its name, this school of thought was based in the city of Miletus on the western coast of Anatolia, modern day Turkey. Anaximander is one of the three prominent figures in this philosophical school, the other two being Thales and Anaximenes, the former commonly thought to have been Anaximander’s teacher, whilst the latter, his student.