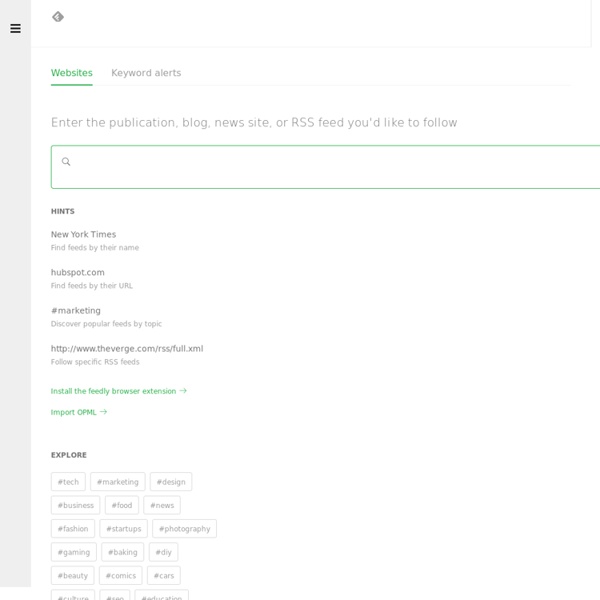 Sorry. Your feedly session has expired. Please reload this page or restart your browser to try to create a new session. Serving millions of passionate readers every day! Available on your phone and tablet Integrated into 100+ third party apps

NASA-Led Study Finds Warming-Driven Megadroughts Jeopardizing Amazon Forest By Joe Romm "NASA-Led Study Finds Warming-Driven Megadroughts Jeopardizing Amazon Forest" An area of the Amazon rainforest twice the size of California continues to suffer from the effects of a megadrought that began in 2005, finds a new NASA-led study. These results, together with observed recurrences of droughts every few years and associated damage to the forests in southern and western Amazonia in the past decade, suggest these rainforests may be showing the first signs of potential large-scale degradation due to climate change. At left, the extent of the 2005 megadrought in the western Amazon rainforests during the summer months of June, July and August as measured by NASA satellites.

The early origins of the gender pay gap One of the more remarkable and discouraging facts about the U.S. economy is that even while women have increasingly entered the workforce, they still make less than comparable men on a variety of metrics. Even though women now outnumber men in college, there is still a difference in earnings. Part of this gap is because men are more likely to study in high-paying fields such as math, science, and various technology fields. But why does this gap exist? Online Music Piracy Doesn’t Hurt Sales, European Commission Finds New research published by the European Commission's Joint Research Centre shows that online piracy doesn't hurt digital music revenues. The researchers examined browsing habits from 16,000 Europeans and found that there's a positive link between online piracy and visits to legal music stores, irrespective of people's interest in music. The study concludes that the music industry should not see piracy as a growing concern. Research into online piracy comes in all shapes and sizes, often with equally mixed results. The main question often is whether piracy is hurting sales. A new study by The Institute for Prospective Technological Studies, which is part of the European Commission’s Joint Research Centre, tackled this question in a unique way.

Borgia Pope And Vatican Hid Painting Linked To Native Americans For Over 500 Years This recently restored painting in the Vatican, created in 1494 by the Renaissance master Pinturicchio, has a small depiction of naked men with feathered headdresses. This may be the first European depiction of Native Americans. The scene, just above the tomb of Jesus, is too small to be seen in this view of the entire painting but is shown in the photo below. (Courtesy of Vatican Museums) My Yahoo! Rafael Nadal vs Roger Federer, BNP Paribas Masters: Where to watch live, betting odds and live streaming info Rafael Nadal will face Roger Federer for the second time this season in the fourth round at the BNP Paribas Masters at Indian Wells on Wednesday (15 March). Nadal will have a chance to avenge his 2017 Australian Open final defeat when he takes on Federer. It is the earliest the two are facing each other in a tournament since their third round meeting which was their first ever at the Miami Masters in 2004.

National Climate Assessment Details Stronger Evidence Of Global Warming And Its Impacts A federal committee has published a draft of the nation's third climate assessment report, a comprehensive analysis of the latest and best peer-reviewed science on the extent and impacts of global warming on the United States. None of the body's findings are entirely new, but the report suggests that evidence is now stronger and clearer than ever that the climate is rapidly changing -- primarily as a result of human activities, including the copious burning of fossil fuels. Observed weather extremes are on the rise, and the possible connection between at least some of these events and human-induced climate change is also more strongly supported by the science. The nation can expect increased impacts on everything from crops to fresh water supplies, and better and broader national plans for adaptation are needed, the assessment noted. "Climate change presents a major challenge for society," the committee's leadership said in a letter addressed to the American people.

The Brand Reputation Discreditation Before you ReTweet, repin or share that content – READ IT! We should all aware by now that what we post online, especially public content, will live forever. What you post can have profound, long term effects on your brand reputation. Even a single post, tweet or comment can take on a life of its own. Where am I going with this? While it’s generally sunk in that we need to be careful WHAT we post, it seems that isn’t necessarily the case with what we REPOST. Tit for tat In Western business cultures, a handshake when meeting someone is an example of initial cooperation. Tit for tat is an English saying meaning "equivalent retaliation". It is also a highly effective strategy in game theory for the iterated prisoner's dilemma.

Ad of the Day: IBM Makes the World's Smallest Movie ... With Atoms IBM and Ogilvy make a big impact with the smallest of building blocks in their latest video, billed as "the world's smallest movie"—a rudimentary stop-motion animation made by IBM scientists using a special microscope they invented to move atoms around on a surface. The movie, titled "A Boy and His Atom," consists of nearly 250 frames of stop-motion action and tells the simple story of a boy named Atom who dances and plays with an atom. By drawing viewers in with the film (a technological marvel that will no doubt be passed around far and wide), IBM then uses an engrossing behind-the-scenes clip to tell its larger story—about how the company has worked at the nanoscale for decades to explore the limits of data storage, among other things with real-world applications. Andreas Heinrich, a principle investigator at IBM Research, is the most eloquent voice of the project. While IBM works on that, it hopes this movie accomplishes a simpler goal: getting kids to love science.

Pre-fabricated 'backyard rooms' beautify working remotely Backyard Room is a pre-fabricated structure designed by the architects and builders at Archiblox which achieves a minimum six star rating and can be assembled in a matter of weeks. Passive solar design, sustainable materials, water conservation and energy efficiency all contribute to a garden room that achieves at least six star rating. The Rooms are architecturally designed and built by Master Builders, with each garden studio designed to fit into any backyard, whether it’s a single fronted terrace or a large open garden. Co-founder of Backyard Room and architect Bill McCorkell said: “These days whether people are working from home, starting their own business or doing creative projects, we know the importance of having a space that is removed from the hustle and bustle of the family home,” says co-founder and architect Bill McCorkell. “At Backyard Room we are offering that space which is architecturally designed, sustainable and cost effective.”