OSU researcher a staunch vitamin E defender. Oregon State University researcher Maret Traber is on a mission to change ­attitudes about vitamin E, a ­sometimes-controversial ­nutrient she has studied for most of her 45-year career. 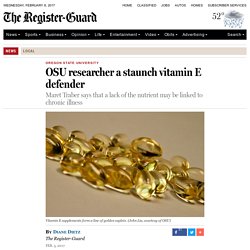 Traber, a principle ­investigator at OSU’s Linus ­Pauling ­Institute, published the latest — of 250 lifelong ­publications — in the January edition of the American Journal of Clinical Nutrition. The study suggested that the one-third of U.S. adults with metabolic syndrome are severely lacking in ­vitamin E, and that may be one ­reason they face the scourge of chronic illness. Metabolic syndrome is a blend of ailments, including abdominal obesity, high blood pressure, high blood glucose, and high levels of certain fats in the bloodstream. Adding vitamin E might help, Traber says. “You absolutely need that (vitamin E) molecule,” she said in a recent interview. In the 1990s, when antioxidants were all the rage, vitamin E was riding high. “Well, what does that really mean?” US Pipelines Incidents Are a Daily Occurrence - FracTracker Alliance. Recently, there has been a lot of attention focused on the Mayflower, Arkansas pipeline failure that resulted in a massive oil spill, particularly as it comes at a time when discussions of the controversial Keystone XL Pipeline project are once again heating up. 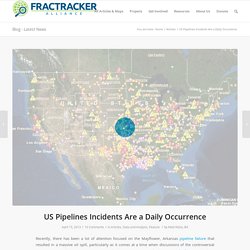 However, the situation is far from unusual. In fact, according to data downloaded from the Pipeline and Hazardous Materials Safety Administration (PHMSA), there were 1,887 incidents in the nation’s gathering and transmission, distribution, and hazardous liquids pipelines between January 1, 2010 and March 29, 2013, or an average of 1.6 incidents per day. Pipeline incidents from 1/1/2010 through 3/29/2013. What is Science On a Sphere. Science On a Sphere® (SOS) is a room sized, global display system that uses computers and video projectors to display planetary data onto a six foot diameter sphere, analogous to a giant animated globe. 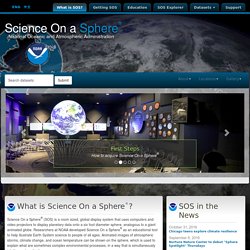 Researchers at NOAA developed Science On a Sphere® as an educational tool to help illustrate Earth System science to people of all ages. Animated images of atmospheric storms, climate change, and ocean temperature can be shown on the sphere, which is used to explain what are sometimes complex environmental processes, in a way that is simultaneously intuitive and captivating. Science On a Sphere® extends NOAA's educational program goals, which are designed to increase public understanding of the environment.

Using NOAA's collective experience and knowledge of the Earth's land, oceans, and atmosphere, NOAA uses Science On a Sphere® as an instrument to enhance informal educational programs in science centers, universities, and museums across the country. Climate Change is Boring. 13 Misconceptions About Global Warming. Youtube. The Surprising Places We Waste Energy. Jeff Bridges Speaks Truth to Plastic — Plastic Pollution Coalition. Jeff knows: plastic is a substance the Earth cannot digest. 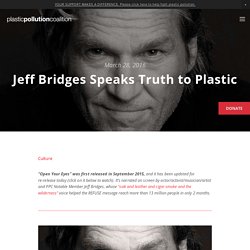 Worldwide reliance on disposable plastic packaging and utensils is poisoning our bodies, killing wildlife, and overwhelming our planet. Single-use plastic deepens our dependence on fossil fuels, contributing to climate change and further harming our most at-risk communities. The global problem of unnecessary plastics was demonstrated perfectly when a Whole Foods grocer in California was called out for selling pre-peeled oranges in plastic deli containers — and at $6 a pound.

“Orangegate” quickly spread on social media when PPC re-posted a photo of the oranges, which reached more than 1 million people on Facebook. To their credit, Whole Foods responded within two days by pulling the oranges from their shelves and issuing an apology on Twitter. Still, consumers can find everything from plastic-wrapped single bananas to individually wrapped jelly beans on store shelves today.

JB: 1.) Why People Don't Believe In Climate Science. Climate Change. 10. Get into... How big is the “carbon fertilization effect”? Posted on 26 February 2013 by gws A new paper by Hemming et al. presents physical, best case limits on the (opposing) effects of warming and CO2 on the “greening” of the biosphere. 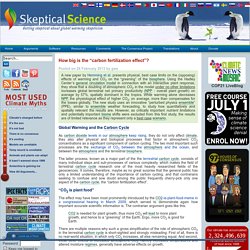 Using the Hadley Center’s general circulation model in connection with an interactive plant response, they show that a doubling of atmospheric CO2 in the model under no other limitations increases global terrestrial net primary productivity (NPP - overall plant growth) on average by 57%, spatially dominant in the tropics. While warming alone decreases NPP, the physiological effect of higher CO2, on average, more than compensates for the losses globally. The new study uses an innovative “perturbed physics ensemble” (PPE), similar to ensemble weather forecasting, to study how quantitatively and spatially relevant the results are. Global Warming and the Carbon Cycle “CO2 is plant food” CO2 is needed for plant growth, thus more CO2 will lead to more plant growth, and hence to a “greening” of the Earth. Summary.