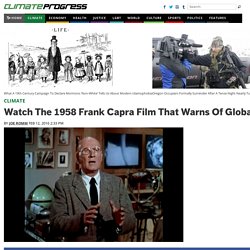 That warning came from The Bell Laboratory Science Series, which aired its fourth TV episode, “Unchained Goddess,” written and produced by three-time Oscar winner Frank Capra. Capra is famous for classic films like “It’s a Wonderful Life,” and not so famous for having a degree in chemical engineering. In this film, Dr. Research (Dr. Frank Baxter) explains to The Writer (Richard Carlson) that unrestricted carbon dioxide emissions could lead to a world where “Tourists in glass bottom boats would be viewing the drowned towers of Miami”: “Even now, man may be unwittingly changing the world’s climate through the waste products of his civilization,” warns Dr. Note: Now we are emitting six times (!) Is that “bad,” the Writer asks. “Well, it’s been calculated a few degrees rise in the Earth’s temperature would melt the polar ice caps. American Geophysical Union Releases Revised Position Statement on Climate Change - AGU Newsroom. 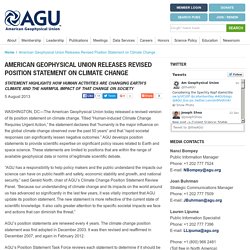 Titled “Human-induced Climate Change Requires Urgent Action,” the statement declares that “humanity is the major influence on the global climate change observed over the past 50 years” and that ”rapid societal responses can significantly lessen negative outcomes.” AGU develops position statements to provide scientific expertise on significant policy issues related to Earth and space science. These statements are limited to positions that are within the range of available geophysical data or norms of legitimate scientific debate. AGU’s position statements are renewed every 4 years. The climate change position statement was first adopted in December 2003.

AGU’s Position Statement Task Force reviews each statement to determine if it should be renewed as is, modified, or eliminated. Rift Widening Between Energy And Insurance Industries Over Climate Change. How do meteorologists fit into the 97% global warming consensus? Several surveys have found relatively low acceptance of human-caused global warming amongst meteorologists. 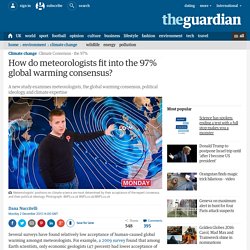 For example, a 2009 survey found that among Earth scientists, only economic geologists (47 percent) had lower acceptance of human-caused global warming than meteorologists (64 percent). A new paper by social scientists from George Mason University, the American Meteorological Society (AMS), and Yale University reports results from a survey of members of the AMS to determine the factors associated with their views on climate change. Climate Scientists and Meteorologists, Apples and Oranges Predictably, many climate contrarians have already misrepresented this paper. Satellite measurements of warming in the troposphere. John Christy and Roy Spencer of the University of Alabama published a series of papers starting about 1990 that implied the troposphere was warming at a much slower rate than the surface temperature record and climate models indicated Spencer and Christy (1992). 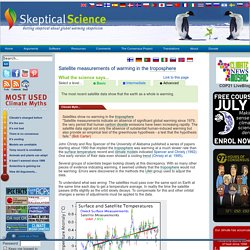 One early version of their data even showed a cooling trend (Christy et al. 1995). Several groups of scientists began looking closely at this discrepancy. Global Warming: NASA scientist Roy Spencer recently posted on his Web site some startling graphs produced by John Christy, his colleague at the University of Alabama in Huntsville. 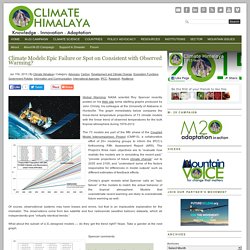 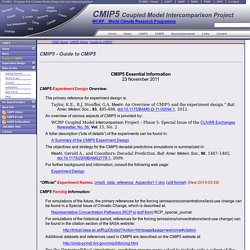 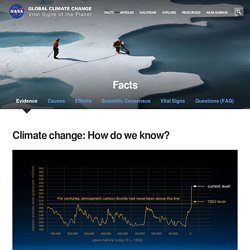 Just in the last 650,000 years there have been seven cycles of glacial advance and retreat, with the abrupt end of the last ice age about 7,000 years ago marking the beginning of the modern climate era — and of human civilization. Most of these climate changes are attributed to very small variations in Earth’s orbit that change the amount of solar energy our planet receives. Scientific evidence for warming of the climate system is unequivocal. The current warming trend is of particular significance because most of it is very likely human-induced and proceeding at a rate that is unprecedented in the past 1,300 years.1 Earth-orbiting satellites and other technological advances have enabled scientists to see the big picture, collecting many different types of information about our planet and its climate on a global scale. 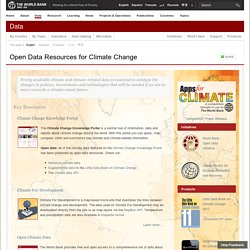 Projected temperature and precipitation changes for 2020-2040, 2041-2060, 2061-2080 and 2081-2100, by country. Some of these indicators will also be available as map layers, or via an application programming interface (API). Climate Monitoring. Milutin Milanković. Life[edit] Early life[edit] House in Dalj where Milanković was born Milutin Milanković was born in the village of Dalj, a settlement on the banks of the Danube in what was then part of Austro-Hungarian Empire (and is now part of Croatia). 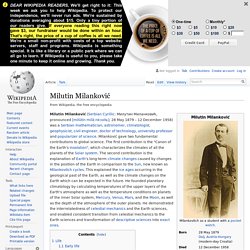 Milutin and his twin sister were the oldest of seven children. Their father was a merchant, landlord, and local politician who died when Milutin was eight; his mother, grandmother, and an uncle then raised the children. In October 1896, at the age of seventeen, he moved to Vienna to study Civil Engineering at the Vienna University of Technology and graduated in 1902 with the best marks.