RealClimate: Recent global warming trends: significant or paused or what? 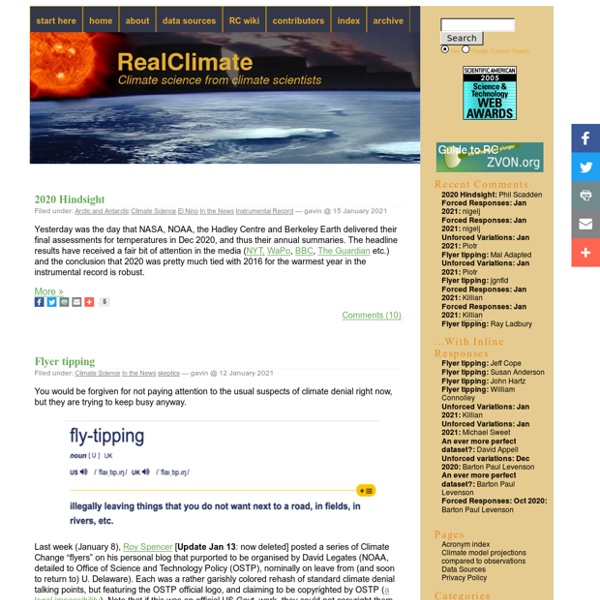 Guest commentary from Drew Shindell There has been a lot of discussion of my recent paper in Nature Climate Change (Shindell, 2014). That study addressed a puzzle, namely that recent studies using the observed changes in Earth’s surface temperature suggested climate sensitivity is likely towards the lower end of the estimated range. However, studies evaluating model performance on key observed processes and paleoclimate evidence suggest that the higher end of sensitivity is more likely, partially conflicting with the studies based on the recent transient observed warming. The new study shows that climate sensitivity to historical changes in the abundance of aerosol particles in the atmosphere is larger than the sensitivity to CO2, primarily because the aerosols are largely located near industrialized areas in the Northern Hemisphere middle and high latitudes where they trigger more rapid land responses and strong snow & ice feedbacks.

Evidence The Earth's climate has changed throughout history. Just in the last 650,000 years there have been seven cycles of glacial advance and retreat, with the abrupt end of the last ice age about 7,000 years ago marking the beginning of the modern climate era — and of human civilization. Most of these climate changes are attributed to very small variations in Earth’s orbit that change the amount of solar energy our planet receives. Scientific evidence for warming of the climate system is unequivocal.

Pictures of Pennies Hi, I'm Mitch Fincher and these pages are from a talk I gave while a Civil Engineering student at Texas Tech University. The following is the basic pattern for building cantilevered structures with Pennies. Although it looks trivial, we can build amazing structures with these pillars. Intergovernmental Panel on Climate Change The Intergovernmental Panel on Climate Change (IPCC) is a scientific intergovernmental body under the auspices of the United Nations,[1][2] set up at the request of member governments.[3] It was first established in 1988 by two United Nations organizations, the World Meteorological Organization (WMO) and the United Nations Environment Programme (UNEP), and later endorsed by the United Nations General Assembly through Resolution 43/53. Membership of the IPCC is open to all members of the WMO and UNEP.[4] The IPCC is chaired by Rajendra K. Pachauri. The IPCC does not carry out its own original research, nor does it do the work of monitoring climate or related phenomena itself. The IPCC bases its assessment on the published literature, which includes peer-reviewed and non-peer-reviewed sources.[7] Thousands of scientists and other experts contribute (on a voluntary basis, without payment from the IPCC)[8] to writing and reviewing reports, which are then reviewed by governments.

Two degrees: Will we avoid dangerous climate change? 09 Dec 2014, 11:30Simon Evans Limiting warming to no more than two degrees has become the internationally accepted target for climate policy, as we saw in the first blog of our series of pieces looking at the two degrees limit. Scientists think the risks of climate change increase as temperatures rise. The 101 Most Useful Websites on the Internet Here are the most useful websites on the Internet that will make you smarter, increase productivity and help you learn new skills. These incredibly useful websites solve at least one problem really well. And they all have cool URLs that are easy to memorize thus saving you a trip to Google. Also see: The Best Android Apps Also see: The Best Mac Apps and Utilities seatguru.com – consult this site before choosing a seat for your next flight.webmakerapp.com — an offline playground for building web projects in HTML, CSS and JavaScript.

Who We Are CGIAR is the only worldwide partnership addressing agricultural research for development, whose work contributes to the global effort to tackle poverty, hunger and major nutrition imbalances, and environmental degradation. It is carried out by 15 Centers, that are members of the CGIAR Consortium, in close collaboration with hundreds of partners, including national and regional research institutes, civil society organizations, academia, development organizations and the private sector. The 15 Research Centers generate and disseminate knowledge, technologies, and policies for agricultural development through the CGIAR Research Programs. The CGIAR Fund provides reliable and predictable multi-year funding to enable research planning over the long term, resource allocation based on agreed priorities, and the timely and predictable disbursement of funds. The multi-donor trust fund finances research carried out by the Centers through the CGIAR Research Programs.

Oil Investors at Brink of Losing Trillions of Dollars in Assets. Gore: It's That Road Runner Moment Climate: Now or Never A major threat to fossil fuel companies has suddenly moved from the fringe to center stage with a dramatic announcement by Germany’s biggest power company and an intriguing letter from the Bank of England. A growing minority of investors and regulators are probing the possibility that untapped deposits of oil, gas and coal -- valued at trillions of dollars globally -- could become stranded assets as governments adopt stricter climate change policies. 64 Things Every Geek Should Know. The term ‘geek’, once used to label a circus freak, has morphed in meaning over the years. What was once an unusual profession transferred into a word indicating social awkwardness. As time has gone on, the word has yet again morphed to indicate a new type of individual: someone who is obsessive over one (or more) particular subjects, whether it be science, photography, electronics, computers, media, or any other field. A geek is one who isn’t satisfied knowing only the surface facts, but instead has a visceral desire to learn everything possible about a particular subject. A techie geek is usually one who knows a little about everything, and is thus the person family and friends turn to whenever they have a question.