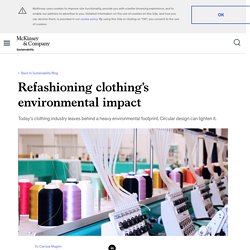 But for all the growth it generates, the industry also encourages considerable waste: More than half of fast fashion is disposed of in under a year, according to estimates. This ‘take, make, and dispose’ business model has outsize costs to the environment, society, and the industry itself. Total greenhouse gas emissions from textiles production clock in at 1.2 billion tons a year, more than those emitted by all international flights and maritime ships combined. Replacing this linear business model with a circular design one would help recapture more than $500 billion in industry losses every year and still mitigate negative environmental impacts. Major brands, including H&M and Nike, are already taking notice. Design out waste and pollution Keep materials in use Regenerate natural systems. Journal Of Petroleum And Environmental Biotechnology. Environmental Biotechnology, a sub discipline of Biotechnology is the application of biotechnology used to study the natural environment. 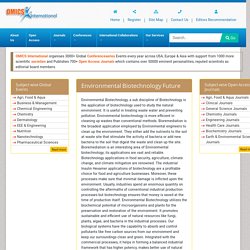 It is useful in treating waste water and preventing pollution. Meet generation Greta: young climate activists around the world. In May, for the second time this year, more than 1.5 million young people in more than 125 countries walked out of schools, colleges and universities in the biggest day of global climate action ever. 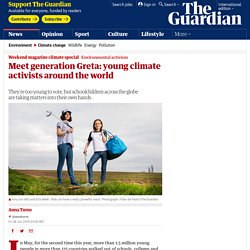 Young people have protested en masse before – millions marched against the Iraq war in 2003 – but this child-led uprising is happening with unprecedented momentum on a global scale. The urgency of their protests reflects the very narrow window of opportunity left to make positive change. We are already living outside the climate parameters that first gave rise to humans, and the world’s leading climate scientists agree that we have only 12 years to limit global warming to a maximum of 1.5°C. 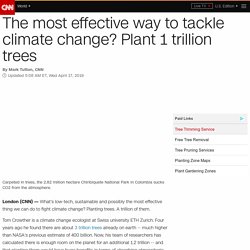 Four years ago he found there are about 3 trillion trees already on earth -- much higher than NASA's previous estimate of 400 billion. Now, his team of researchers has calculated there is enough room on the planet for an additional 1.2 trillion -- and that planting them would have huge benefits in terms of absorbing atmospheric carbon dioxide, the main driver of climate change. Leonardo DiCaprio announces new plan to fight climate change. Not only do Gulf of Aqaba corals survive climate change but their offspring may too.

While coral reefs worldwide are suffering severe damage due to global warming and ocean acidification, there is one place in the world where they are surviving these harsh conditions—the Gulf of Aqaba in the Red Sea. 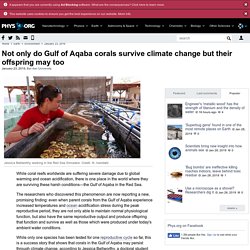 The ozone is finally healing and could be completely repaired by 2060. Johan Rockström: 5 transformational policies for a prosperous and sustainable world. The Ocean Cleanup launches its plastic collecting system - Video. Preaching against plastic: Indonesia's religious leaders join fight to cut waste. Indonesia, one of the world’s biggest marine polluters, has decided to get religious – literally – about reducing plastic waste. 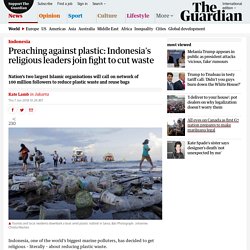 The government has announced it will join forces with the country’s two largest Islamic organisations, Nahdlatul Ulama (NU) and Muhammadiyah, using their extensive networks across the world’s largest Muslim-majority nation to encourage consumers to reduce plastic waste and reuse their plastic bags. Together the two Islamic institutions have more than 100 million followers. As part of the initiative, religious leaders will visit prayer groups across the country to preach about the importance of reducing plastic waste, explain how plastic waste can worsen the severity of natural disasters such as floods and landslides, and encourage consumers to switch to traditional bags, made from materials such as rattan and bamboo. Globally, Indonesia is the second-largest contributor to marine plastic waste after China. … we have a small favour to ask. Scientists accidentally create mutant enzyme that eats plastic bottles.

Energy efficiency cuts carbon from buildings. With the highest efficiency standards, countries can cut household carbon emissions at no cost to consumers – and achieve the UN’s climate goals. 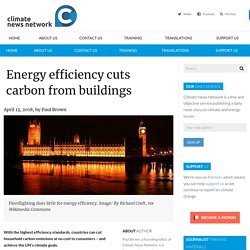 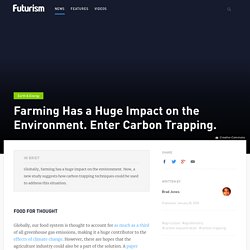 Now, a new study suggests how carbon trapping techniques could be used to address this situation. Food for Thought Globally, our food system is thought to account for as much as a third of all greenhouse gas emissions, making it a huge contributor to the effects of climate change. Chance Discovery Could Tackle The Honeybee's Worst Enemy. It isn’t just pesticides and the destruction of habitat that’s making the world’s honeybees very unhappy. 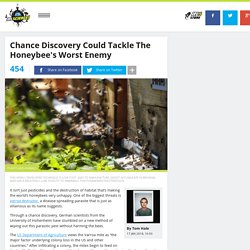 U.K. Plans 'Northern Forest' of 50 Million New Trees. The plan is for 50 million new trees to repopulate one of the least wooded parts of the country—and offer a natural escape from several cities in the north. 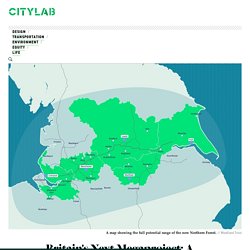 Northern England is set to get a whole lot greener. On Sunday, the U.K. government unveiled plans for a vast new forest spanning the country from coast to coast. Shadowing the path of the east-west M62 Highway, the new forest will create a broad green rib across England from Liverpool to the east coast city of Hull. If fully realized along the lines announced this week, the forest will ultimately contain 50 million new trees, stretched in a dense 62,000-acre patchwork along a 120-mile strip. New measurement confirms: The ozone is coming back. The Montreal Protocol, which went into effect in 1989, is a rare instance of a global agreement to solve a global problem: the release of vast quantities of ozone-destroying chemicals into the atmosphere. On Flipboard. A Swiss System Is Capturing Carbon Dioxide from the Air and Reselling It. In Brief Concentrations of carbon dioxide in our atmosphere are reaching levels that haven't been recorded in human history. This direct-air capture system by Swiss company Climeworks might help address the problem.

Carbon Capture The level of carbon dioxide in our atmosphere is becoming untenable – a recent report indicated that it hasn’t been this high in millions of years. Now, researchers in Switzerland are investigating a method of addressing the problem by capturing carbon dioxide from the air. The team is developing a commercial approach to carbon capture at a facility half an hour outside of Zurich. MIT Scientists Created a New Method of Turning CO2 into Fuel. Ral Transplant Success Could Be A Ray Of Hope For The Great Barrier Reef. The seven megatrends that could beat global warming: 'There is reason for hope' ‘Everybody gets paralysed by bad news because they feel helpless,” says Christiana Figueres, the former UN climate chief who delivered the landmark Paris climate change agreement.

The Largest Ever Tropical Reforestation Is Planting 73 Million Trees. There are more habitable planets in our galaxy than humans living on planet Earth. But the nearest one is about 70 trillion miles away, which means that, for now, and for the foreseeable future, Earth is the only life-supporting rock hurtling through infinite space we’ll ever know. Geoengineering May Be Our Only Hope for Surviving Climate Change. We Can Stop Climate Change Ourselves. This is How. Climate Change is Here. Meet the House That Can Produce More Energy Than It Consumes. In Brief The HouseZero project is taking a pre-1940s house and retrofitting it to be ultra-efficient, with zero carbon emissions, 100% natural ventilation and light and near-zero energy use. Minneapolis's citizen-centric approach to climate action. With average winter temperatures of just over 15 degrees Fahrenheit, you might think Minneapolis could use a little warming.

Our best shot at cooling the planet might be right under our feet. Meet John D. Liu, the Indiana Jones of Landscape Restoration. [ English | Español ] The Ozone Hole Is Finally Healing. Explicit cookie consent. THIS year the world’s power stations, farms, cars and the like will generate the equivalent of nearly 37 billion tonnes of waste carbon dioxide. Iceland Carbon Dioxide Storage Project Locks Away Gas, and Fast. Coming Soon: Carbon Capture Plants That Suck CO2 Out Of The Air.